While America fixates on fiction, Toggle has real people you want to know about

One of the most talked about women in America these days resides in Manhattan’s Financial District. She’s notable for sparking discourse on the lack of women on corporate boards, though critics say her ulterior motive is promoting an initiative of her company. Her name is “Fearless Girl.”

In Toggle, we want to promote women who just like Fearless Girl defy the lack of women in their industry.

If you’ve followed the headlines, you know that Fearless Girl is not a real person, but is actually a bronze statue that was defiantly placed in the path of the hulking “Charging Bull” statue that has been a symbol of American prosperity since 1989.

While she was intended to start a conversation—and that she did—Fearless Girl is, ironically, silent, so critics and commentators spoke for her.

As proud parents lined up to take selfies with Fearless Girl and their daughters, and Mayor Bill de Blasio of New York vied for her placement to be more permanent, journalists and bloggers denounced the statue for being a meek representation of women who have already defied bullish work cultures. A New York Times writer wondered, “Where, for instance, was her nanny?”

In Toggle, we want to promote women who just like Fearless Girl defy the lack of women in their industry. But unlike the creators of Fearless Girl—that would be State Street Global Advisors, the world’s third largest asset manager—we want to give those women a voice so others do not feel the need to speak for them.

Janet DeBerardinis keeps the wheels turning at America’s largest auto collision repair company. Because of DeBerardinis and her staff, Caliber Collision can acquire a business on a Friday and the following week that business will have all the same soft- and hardware as all of Caliber’s other locations. It might explain how the company was able to expand from 86 locations to more than 475 in just six years.

Brenna Berman is the chief information officer for the City of Chicago. With her guidance, America’s third largest city is vacuuming up data on everything from air quality to traffic patterns through futuristic pods placed on traffic lights. Among the broad implications, the Windy City will collect temperature data on a block-by-block basis to understand the Lake Effect and, as a result, better estimate where to apply salt before snow storms.

Laurie Panella has helped the departments of Milwaukee County, Wisconsin, come together. Chosen because of her ability as a connector, not just a tech person, she learned the E-wares as she went. Answering her phone for a Toggle interview, she noted with good nature, “It’s been crazy today.” Then added: “Oh, what am I saying? It’s been crazy the past two years because the IT departments been in such high demand.”

Leslie Fuentes is CIO of what she describes as “a big small town.” That would be Hampton, Virginia. For her part, Fuentes says she just provides tools for Hampton’s highly engaged citizens, who then put them in surprising ways. When Hurricane Matthews blasted the city of 150,000 with wind and water, for instance, residents dug up publically available maps on flooding and started giving the city updates. “We didn’t even publish that these maps were open to the public,” Fuentes says, amazed.

Stacey Aldrich says she acts a bridge between people and vital information on Hawaiian Islands. Her biggest issue? “An embarrassment of riches,” the writer of her story, Mike Schoch, notes, which includes 92 databases that many patrons don’t even know exist. Also an amateur historian, Aldrich says this has long been struggle of libraries. Technology just adds a new twist.

Terri Bettinger worked for banking giants JP Morgan and Citigroup for decades before finally conceding, “If I’m going to be a workaholic, then I want to bring my passion and work ethic to benefit my community.” She’s been CIO for Franklin County, Ohio, for more than two years now, and she’s bringing considerable private sector gumption to the table. Among her tenets is that every upgrade has multiple, tangible benefits.

Aldona Valicenti is racing to bring faster technology to Lexington, Kentucky, and the surrounding county. As CIO for the “Horse Capital of the World,” Valicenti wants speedier internet for residents and Kentucky’s $4 billion equine industry, which sends massive amounts of data—like files with as many as 35 horse X-rays—to buyers around the world. Valicenti sees such tech infrastructure as “the foundation to provide better services”—locally and globally.

Michelle Kaufman is among the masterminds at Distribution Management who has found ways to make the normally chaotic and physical grueling atmosphere of a warehouse into one that’s sleek and automated. Employees on the distribution floor use wearable scanners and rarely lifting a box. Of course, it took 18 years, start to present. “It was a huge beast of a project,” she said with good nature.

Which brings us back to Fearless Girl. 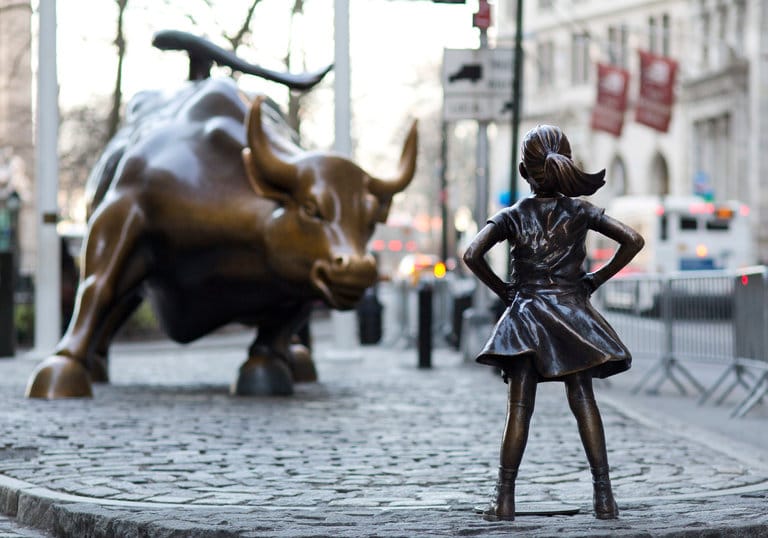 While the little bronze statue comments on inequality in the private sector, these recent Toggle profiles chart the paths of women who are improving the public sector, particularly in local government (with the two exceptions being Janet DeBerardinis and Laurie Panella). Such institutions present particular barriers to women; and we are acknowledging the risks, choices and perseverance shown by these eight executives.

In doing so, now and in the future, our aim is to provide a space for discussion. After all, that will overcome the highest hurtle in discussing any social issue: silence.

Read the full edition of Toggle, featuring these women in tech, here.