It’s said that everything is bigger in Texas, and not simply because its 268,500 square miles make it the largest state in the continental U.S. There are big hats, big trucks, big plates of barbecue and big high school football stadiums where almost 20,000 fans can cheer their team on.

Completed in 2020, the ORION network is an initiative of the Region One ESC Division of Technology for Learning and more than 30 school districts. It was built to reduce the digital divide and to enable schools to offer online courses, share resources, and improve cyber protection, says Ali Kolahdouz. 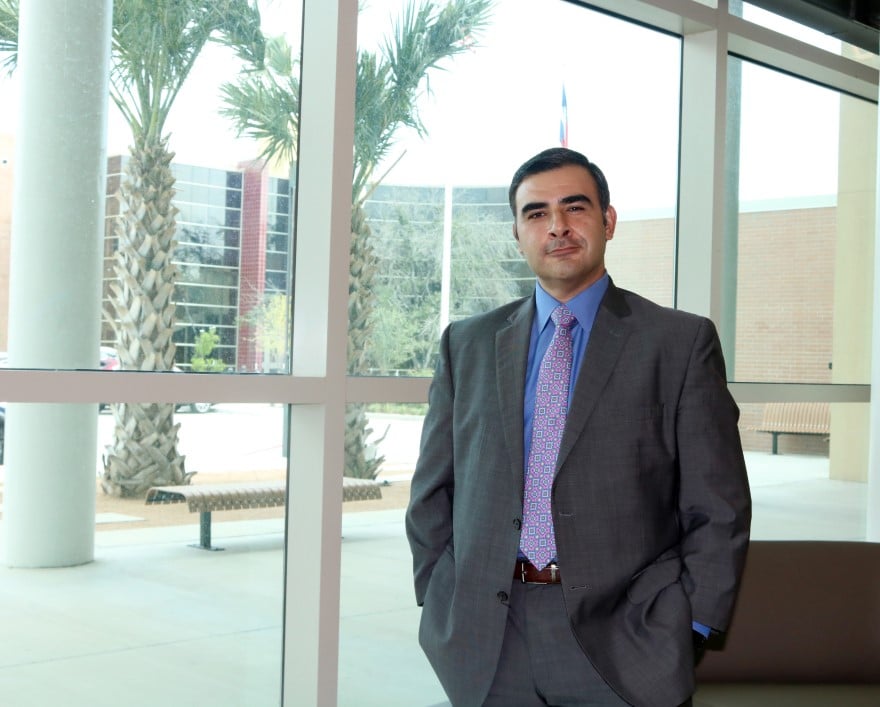 As chief technology officer for Region One ESC, Kolahdouz helped organize the consortium to fund and implement the fiber network. But in a state where rugged individualism may reign, he says he was not riding herd alone.

“This wouldn’t have gotten off the ground without the collaborative effort,” Kolahdouz says. “Hundreds of people were involved over the course of three years. I hope more school systems recognize they have the power to make great technology changes if they work together, even with different goals.”

Established in 1965 as one of 20 education service centers in Texas, Region One ESC is comprised of 38 school districts and 10 charter school systems spread through eight counties along the Rio Grande River and Gulf Coast. 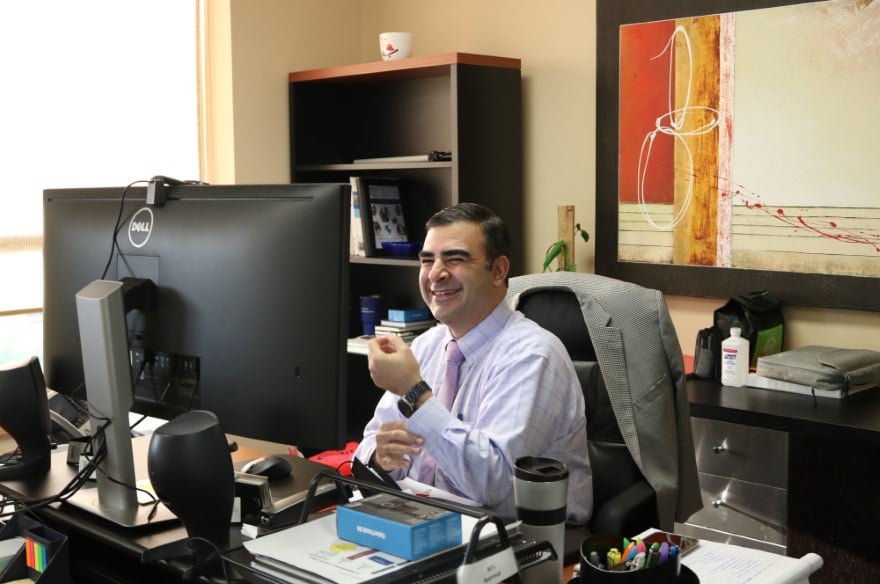 “We don’t dictate or define the initiatives the school districts need to make,” Kolahdouz explains. “We’re a partner for them, with support and expertise in training, professional development and coaching to support the work they do.”

Though Region One ESC doesn’t oversee operations in its individual districts, the area’s digital divide—where some schools had better access than others—did prompt Kolahdouz and his staff to bring the districts together to improve internet access.

“The technical components are straightforward,” Kolahdouz says. “The biggest challenge is getting the entities to work together, then navigating the consortium for state and federal funds and distributing them equitably.”

In 2018, the districts came together, creating a consortium that made broadband expansion more cost-effective compared to each district negotiating its own deal.

In addition to local funds invested by schools and Region One, the consortium expects to receive about $6 million from the U.S. Federal Communications Commission’s E-Rate program over the next 10 years. The network has increased internet speeds by up to five or 10 times while reducing internet costs by up to 200 percent for most consortium members, Kolahdouz adds.

“The E-Rate program is a big help to schools and I’m very thankful there are programs like this to provide this funding to offset the cost of internet access and other crucial technologies,” he says.

Simply having the increased broadband is not enough, though. 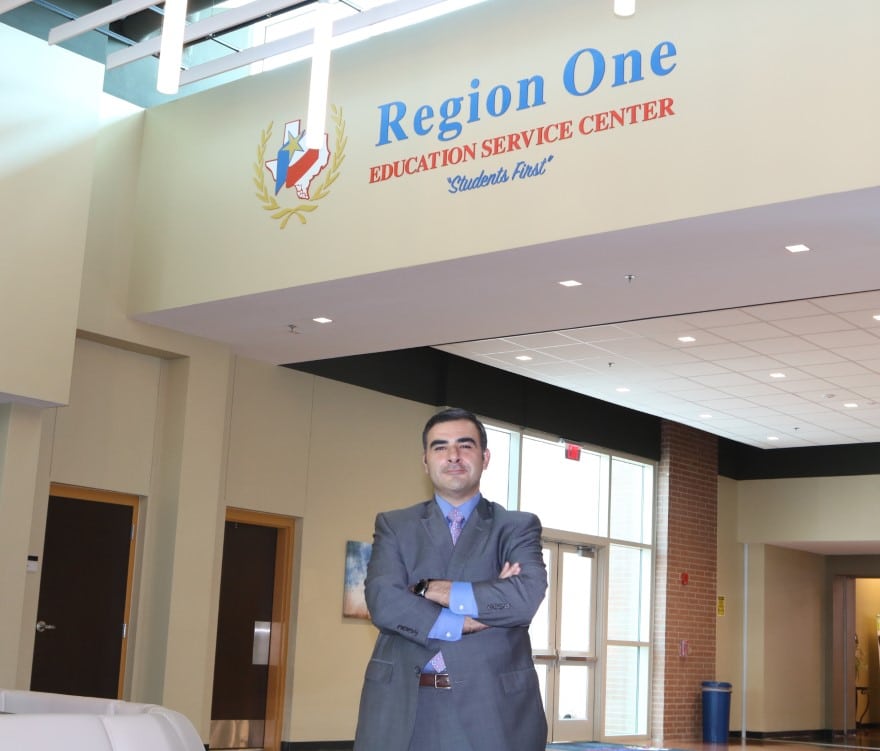 “To build the highway—getting internet service to schools—is a baby step. Now that you’re connected, what do you do with it?” Kolahdouz says.

Faster internet service allows districts to add online courses, perhaps even virtual or augmented reality curriculum. Districts can migrate to the cloud and improve cybersecurity at reduced rates, Kolahdouz adds. That helps districts comply with the Texas Legislature mandate to create their own cybersecurity frameworks.

Kolahdouz says he and his staff also trained and educated staff at Region One ESC schools about cybersecurity.

“We’ve talked about [it] early, often and loudly,” he says. “We try to help people understand that the least secure part of their technology infrastructure may be the people using it.”

The cloud migration also reduces the need for specialized staffing to manage IT infrastructure.

“The complexity of technology is going up and having people in-house in a traditional manner is more difficult,” Kolahdouz says. “Even a data center has become so complex that in-house help may be too difficult or expensive to staff.”

Born in Iran, Kolahdouz moved to the U.S. with his family after the Iranian Revolution and has lived in Texas for nearly 40 years. By the time he was eight years old, he was taking gadgets apart and putting them back together. Soon after, he got his first computer.

“It was the first device I could interact with that wasn’t a TV or radio,” he recalls. “When I figured out how to make my name scroll across the screen, I was hooked.”

Kolahdouz earned his bachelor’s degree in computer science from the University of Texas-Pan American in 2001. He then joined South Texas College as part of the business computer systems faculty. He remained at the college for almost 15 years and was assistant CIO when he joined the University of Texas at San Antonio as director of research technology and communications in July 2016. 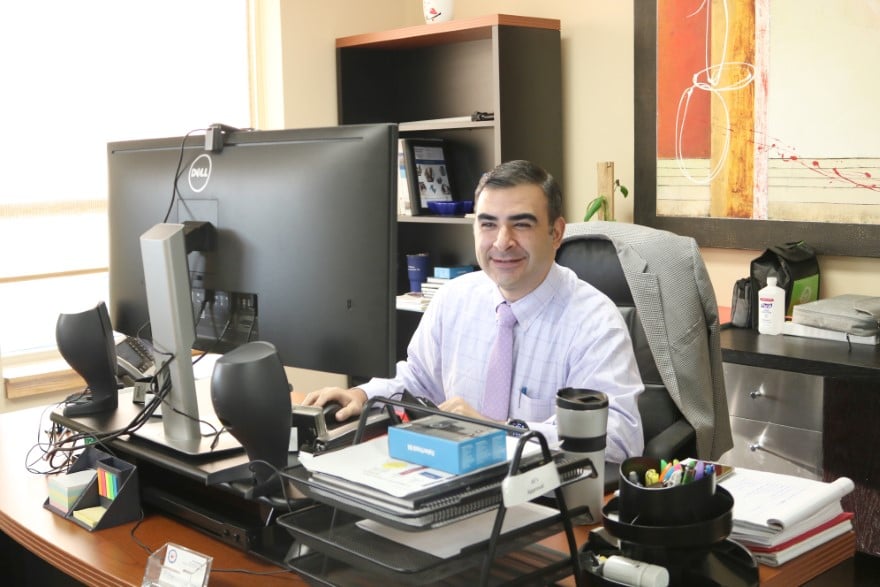 While he’s been immersed in IT, one shouldn’t expect Kolahdouz to be gaming or web-surfing in his off-hours. Instead, you’ll find him in his workshop.

“I like the smell of the sawdust, the feel of wood,” Kolahdouz says. “I like being able to create something tangible, as opposed to the abstract differences of technology.”

He likes to make gifts—cutting boards and jewelry boxes—and Kolahdouz considers the ORION fiber network a gift from those working in schools in South Texas to the current and next generation of young learners.

“I’ve had the benefit of great education. I want the same opportunity for all students,” he says. “I’m trying to pay it forward—all the things I’ve learned. In my opinion, education is a silver bullet, it can help address a lot of challenges society faces today. The fact that you can help a kid succeed and have a better quality of life is the whole point of what we’re doing.” 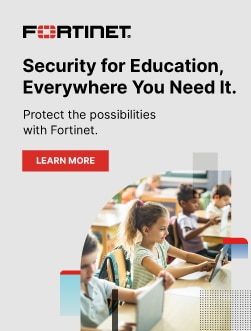 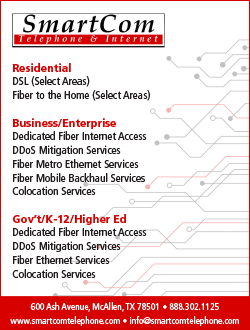