In the capitol of the future all residents are included

Not quite Maryland, not quite Virginia, Washington D.C. may be its own kingdom stationed on the Potomac, but it faces technology challenges similar to those of any other major metropolis, including tight budgets and a lack of access to digital devices for low-income residents.

If anything, the challenges may be more pervasive in the nation’s capitol, where income inequality has historically been high. Mayor Muriel Bowser likely had this in mind when she hired Archana Vemulapalli as the city’s chief technology officer in 2016.

Vemulapalli, a veteran of the private sector and former executive and consultant, is accustomed to getting the most from budgets in the startup world. Her penchant for finding efficient solutions, she says, is not only saving the city money, but helping her achieve her larger goal of bringing digital services to underserved populations.

Show me the value

Vemulapalli says when she joined the city government, she instilled in her team a private sector-inspired philosophy that they should only propose initiatives with clear and easily demonstrable value for residents.

“It’s one thing to say my plan has a lot of value, but another if I can pick a pilot area and start showing the value of these initiatives by doing them,” she says.

She compares it to a startup in its early stages, with a need to focus on elements of the business that will generate revenue.

Vemulapalli took this tack with a number of Washington’s smart city initiatives, pitching them not as ways to introduce more technology, but to meet dire civic needs. For example, when the city faced a surge in rodent infestations as a result of outdated  methods of trash collection, Vemulapalli’s team responded by creating the smart waste management initiative.

Her team worked with the department of public works (DPW) to install more than 400 sensors on existing DPW litter cans.

The sensors in the bins tell the public works department when the bins are full, so garbage trucks can be sent to empty them immediately, leaving less time for rodents to feed and breed. The sensors also collect data that Vemulapalli’s team uses to predict when and where future rodent outbreaks may occur.

Vemulapalli is also partnering with other departments to employ movement sensors to gather data on foot traffic, which it will use to bolster and target economic development efforts; and collaborating with the water department to put sensors in valves and fire hydrants and installing leak detection systems in water mains. In each case, the data collected will provide valuable insight that will reduce leaks and improve traffic flow, saving the city money in terms of both hours and resources.

The cherry on top is that the Office of the CTO (OCTO) recently unveiled this data to the public in an effort to encourage private entrepreneurs to contribute solutions.

In addition to saving money and improving efficiency, Vemulapalli says her team’s startup mentality is getting more people online and trained with digital devices.

Her office has already covered 17 percent of Washington D.C.  with free Wi-Fi, and Vemulapalli anticipates 25 percent coverage by 2018. Additionally, her team leads Connect D.C., a digital inclusion initiative that partners with nonprofits like Byte Back, an organization that provides computer training and career preparation to underserved D.C. neighborhoods. Byte Back offers free training sessions as well as free online tools like a computer access locator that tells residents where to access public computers for free.

In keeping with her proactive approach, Vemulapalli’s teams don’t just make technology available, they bring it to residents’ doorsteps.

“The biggest reason people don’t get training is because they don’t have the time or resources to get to it,” she says.

Connect D.C.’s response to that problem has been the Mobile Tech Lab, a 48-foot bus equipped with computers and Wi-Fi. The Mobile Tech Lab partners with nonprofits and government agencies to teach classes, help residents create email accounts and sign up for government services.

Street teams also go door to door, educating residents on free programs and helping them schedule notifications either on their phone or through email.

“If we don’t leverage technology that gives opportunities to everyone, then the city is going to lose out in the long run,” she says.

Innovation belongs to everyone

“We didn’t try to reinvent the wheel,” she says. “We reached out to the cities that had already done well with it and said ‘tell us what you’ve learned.’”

The city is also reaching out to entrepreneurs in a different manner through the Inclusive Innovation Incubator, called In3, that it built in partnership with Howard University, a prestigious university dedicated to educating students from diverse backgrounds. In3 is a tech hub and co-working space that offers underrepresented communities networking events and mentorships and potential access to investors and partners.

Vemulapalli points out that innovation hubs tend to be located in affluent neighborhoods, but to truly spur innovation and ideas, its best to focus on areas where people have fewer resources at hand.

She says the incubator is a great reflection of her team’s philosophy that one approach rarely fits everybody, and that there is space for multiple hubs and incubators that cater to different populations.

“It bucks the stereotype that you have to have a certain income, race or gender to have great ideas,” she says. 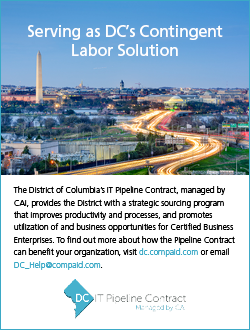