At Virginia State University, a proud career brings progress to the fore

Back in 1882, the year Virginia State University was founded, food production was still very much a binary matter: the more hooves and hands in the field, the bigger and better the yield.

By contrast, modern agriculture has—for better or worse—become a question of manufacturing; one with which VSU agronomists have increasingly had to grapple over the subsequent 135 years.

Today, like all of their cross-discipline peers, these aspiring farmer-scientists depend on the internet; for basic research, sure, but also for the kind of cloud-based data-mining ubiquitous in so many other industrial sectors. 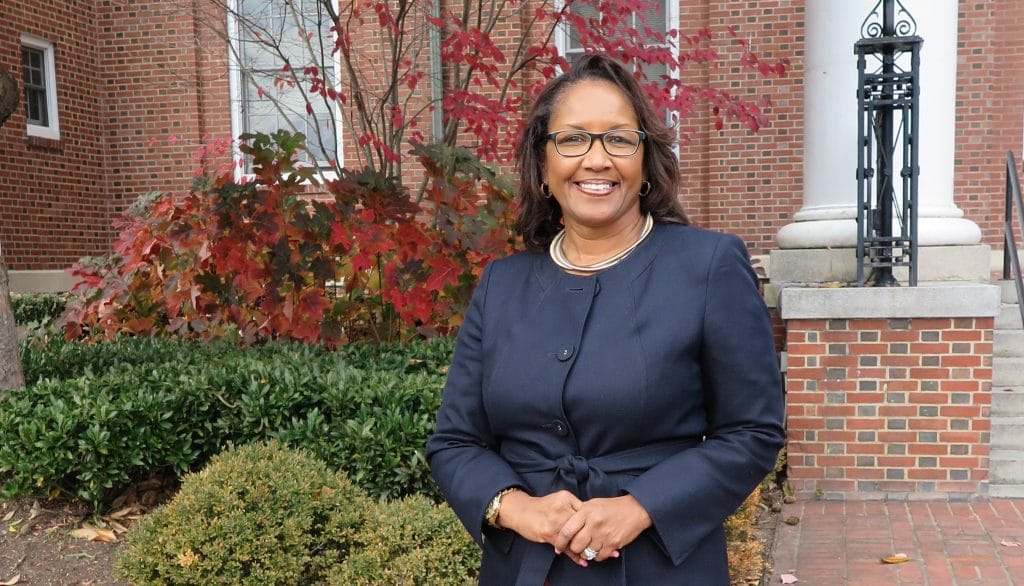 In her role as the school’s CIO, Bettie Backus has strived to bring VSU firmly to the fore of campus-tech innovation, extending network infrastructure to all corners—and fields—of the historically black college (HBCU).

Indeed, with students arriving on campus carrying more devices than ever, Backus believes that bolstering the school’s bandwidth is more than a mere luxury; it’s a necessity. “It’s not enough to just keep up with what the students are using,” she says. “It’s crucial that you’re out in front.”

Fortunately, for students and faculty, it’s an area with which Backus is more than familiar.

Unlike the steady tech curve she now stewards, Backus’ career arc has in many ways come full circle.

Raised in Dinwiddie, a scant 30 miles from VSU’s Petersburg campus, Backus attended Virginia Commonwealth University, earning a B.S. in information systems in 1981. (“That’s what we called computer science back then,” she jokes.)

Backus’ first post-college job was at VSU: working the night shift in the basement of Singleton Hall, where she replaced the magnetic tape reels used to store data on ancient campus computers. 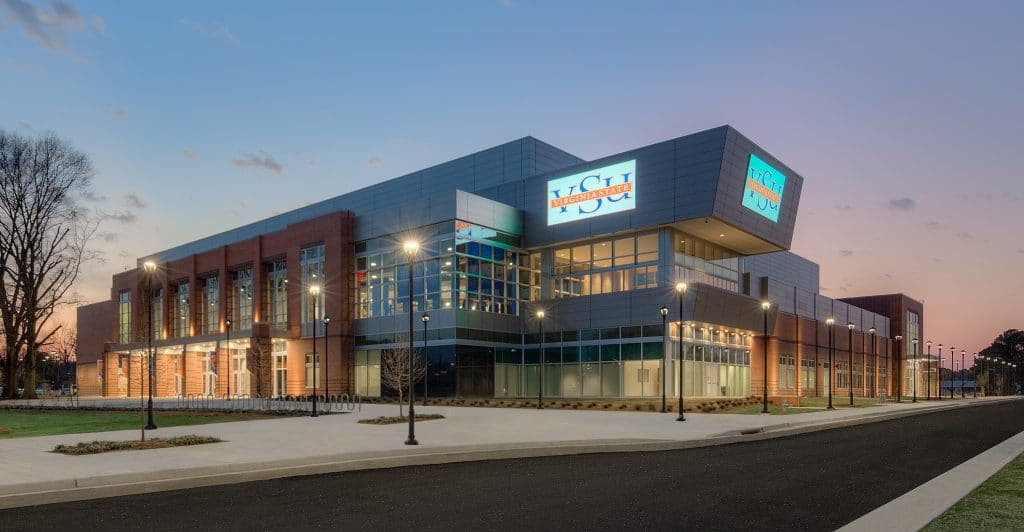 “I literally couldn’t find a job anywhere else,” she recalls. “Not a lot of computer professionals looked like me. Which goes to show how far the perception of the field has come.”

While it only lasted a few months, Backus credits the stint with helping further propel her into the burgeoning world of IT—from systems analyst to municipal project manager to an eventual post at Wells Fargo, where she remained for nearly 10 years.

By 2015, Backus was raring for a return to tech. With a sterling resume,  punctuated by her recent experience in the business world, the then 55-year-old Backus could’ve gone just about anywhere. But it was VSU, freshly in search of a new CIO, whose call resonated deepest.

Like its namesake state, VSU’s history is a complicated one. Founded as the Virginia Normal and Collegiate Institute, the school’s initial benefactor, William Mahone, was perhaps best known for being a former Confederate general.

As the leader of the state’s Readjuster Party, however, Mahone sought to break the post-Civil War stranglehold of Virginia’s wealthy property owners, and was a vocal proponent of giving freed African Americans access to public education.

Meanwhile, the school’s first president, John Mercer Langston, was a onetime dean at Howard University’s law school, and later became the first African American representative ever elected from the state of Virginia.

Against this backdrop—a tangle of thorny roots running through the country’s most painful epoch—VSU grew, over the years and through more than a few name changes, to become a beacon to its HBCU peers.  Notable alums include Herman Branson, the physicist famed for his research on the helix protein structure, as well as James Avery, who played Will Smith’s uncle on the hit show “The Fresh Prince of Bel-Air.”

Today, VSU offers degree programs in 47 subjects, including Computer Engineering (B.S.) and Computer Science (B.S. and M.S.). And while the school’s modest enrollment of 5,500 makes it just the 27th largest college in Virginia, Backus says its  growth remains on a steady, sustainable trajectory—aided, in no small part, by the soil on which it stands.

A few miles from VSU’s brick-framed campus sits Randolph Farm, the school’s sprawling agricultural research center. Housing 130 acres of irrigated cropland, 57 fish stock ponds and 18,500 square feet of greenhouses and tunnels, the complex is in many ways the heart and soul of VSU’s land-grant legacy.

At 416 acres—more than half a square mile—it’s also a wildly unpredictable Wi-Fi zone.

In an effort to overhaul the farm’s fiber-optic workings, Backus hired a company to conduct a full thermal mapping of the area, to show where signals were most lagging. Once identified, these wireless black holes are augmented with new access points, making for better connectivity and, as a result, more reliable research.

“A lot of the work at Randolph Farm is done in conjunction with other entities, including the FDA and Virginia Tech,” Backus explains. “So it’s imperative that our systems be top notch.”

Back on campus, cutting edge initiatives are helping augment and enhance the VSU learning experience, a development Backus is quick to chalk up to her “professional and innovative staff. With the help of Leepfrog, an Iowa-based education technology services company, the school migrated its student catalogs to CourseLeaf, Leepfrog’s customizable, user-friendly curriculum-management system. 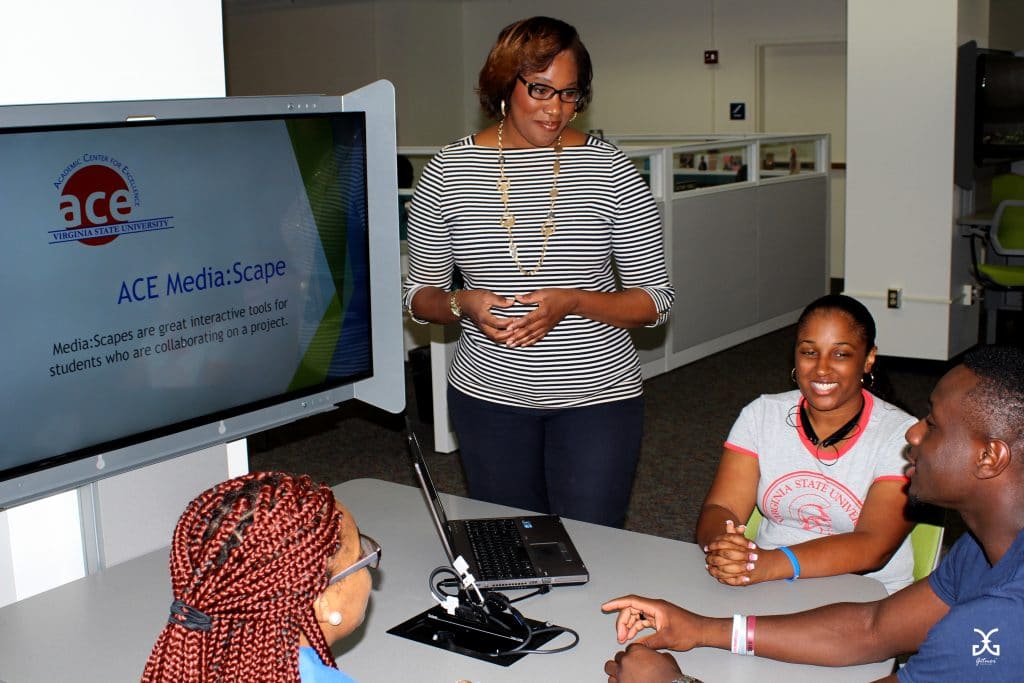 Now, instead of relying on outdated and clunky catalogs, students can access real-time information about any course offered at the university.

“The thing about VSU we found really inspirational was how strong and collaborative the IT leadership was,” says Leepfrog’s Director of Higher Education Accounts Greg Soare.

Other initiatives include the creation of the Academic Center of Excellence (ACE), aimed at ensuring success for the University’s freshmen; a newly renovated collaborative teaching facility; and beginning the process of installing virtual desktop Infrastructure technology to replace the over 50 specialty labs currently housed on campus.

Compared to the sweeping overhauls happening down at Randolph Farm, these might not strike one as particularly radical changes. But for Bettie Backus, even seemingly small-scale upgrades can—to a school that’s long prided itself on being a model for other historically black colleges—prove transformative.

In Makola Abdullah and Hubert Harris—the school’s president and VP of administration, respectively—Backus says she’s found two tech-savvy leaders as committed as she is to her underlying mission: to provide transformative technology to a student body that has always flourished at the precipice of change.

“We call ourselves Virginia’s ‘Opportunity University’ for a reason,” Backus says. “Each morning, when I drive onto campus, or when I walk the grounds and read the excerpts of history, I take pride in how far we’ve come, and that I get to be a part of the future. I’m home.”