Connecting a close-knit community with technology

Saint Michael’s College sits on a pristine 440-acre campus just outside of Burlington in Colchester, Vermont. Since 1904 the small liberal arts and sciences school has served students within a close-knit community. Saint Michael’s is currently home to 2,000 undergrads and more than 500 commuter and graduate students.

With an 11:1 student-to-faculty ratio, Saint Michael’s is known for its small classes and personal instruction. Like all higher education intuitions, Saint Michael’s has seen the student-teacher relationship shift with the introduction of new classroom technology. 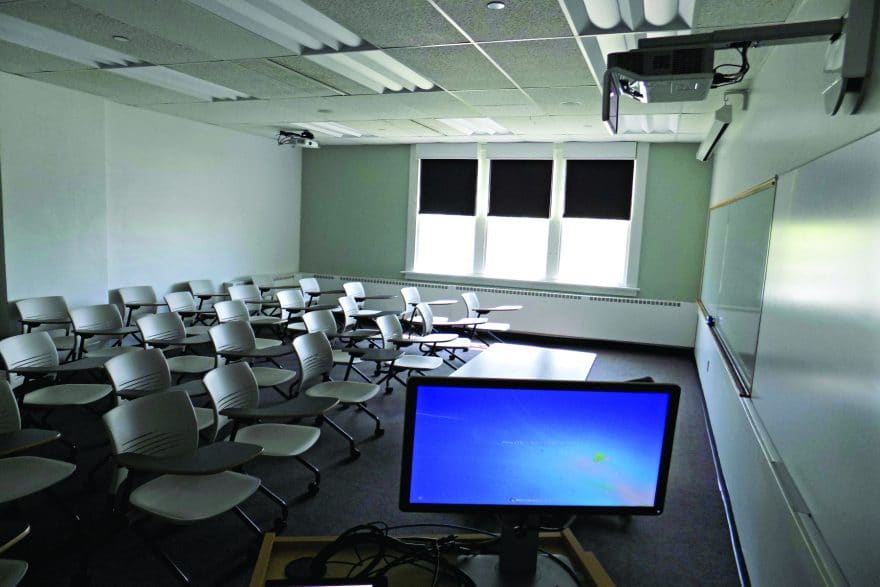 As this technology comes into play, Bill Anderson, chief information officer, is helping Saint Michael’s find the right programs and innovations that bring instruction up to modern-day standards while also maintaining the school’s traditional face-to-face model and personal approach.

Working with students and faculty

Anderson has a long tenure with Saint Michael’s, having served the organization for more than 42 years — the first 28 as a computer science faculty member. “From my time in the classroom for 28 years and from my time as CIO, St. Mike’s has continued to provide interesting challenges and great opportunities for working with colleagues and students,” says Anderson, who has been in the CIO position for 14 years.

While working as a faculty member, Anderson co-founded a vertical market software development company, which he later sold to a large public entity. Today this business and teaching background helps him understand the importance of operational efficiency and management tactics, while also being sensitive to the needs of students and faculty. “My background as a leader of a technology company gave me a certain degree of confidence to start something from nothing and the ability to build up programs and concepts,” he says.

The new role of CIO

Taking on the role of CIO in 2002, Anderson stepped into many technology challenges. “A lot of our technology was out of date, inconsistent and our processes were haphazard,” he says. “There was misunderstanding about roles and technology requests came through multiple cabinet members and were inconsistently funded. We needed a strong, multiyear, consistent approach. I was brought on to help address these issues.”

As CIO Anderson set out to restructure Saint Michael’s technology staff and processes, working hand in hand with leadership to solve these issues and set a clear roadmap for the future. “The evolution of technology means that a CIO now has a say in the vision and future goals of the organization he/she serves,” says Anderson. “It used to be about technology infrastructure and information systems — now CIOs are an essential part of the organizational strategy.”

Using a business-minded approach, Anderson articulates the need, use and vision for technology on campus and promotes innovative uses of technology for institutional improvement. “I think CIOs are most effective in places where they can be a voice at the highest level, where they can speak to the importance of allocating technology resources,” says Anderson.

Fortunately Anderson says there is little push back from the Saint Michael’s executive team when new innovations are brought to the table. “Our current president, John Neuhauser, is more tech minded,” he says. “He gets the notion that the residential tech experience is just as important as the classroom for students; that we need support for specialized computer labs, e.g., the Mac lab for digital media and journalism, the Linux lab for computer science/math and a general lab for language learning. He knows these things are necessary from the point of view that this is how students learn today and this is what they will be expected to do when they leave St. Mike’s.”

While Saint Michael’s small size lends to the agility and the ability to quickly adopt new classroom instruction tools and test technology unlike larger universities, Anderson says his team has been just far enough behind the curve where it can learn from others’ experiences. “As a smaller school, we tend to be a little more conservative and while we allocate a portion of resources to technology experiments, we have leveraged knowledge from others to get a better idea of what works best,” he explains.

One example of learning from other institutions’ investments is Saint Michael’s new accelerated learning program. Personal instruction and traditional face-to-face interaction between students and staff have always been the hallmarks of the school, but recently Saint Michael’s has piloted an accelerated six-week program where students earn eight credit hours with a combination of in-class time and online learning.

Students can chose from more than 20 course offerings including environmental science, forensic psychology, marketing, financial accounting and more in the all-inclusive summer program.

“The program has built-in analytics for student-faculty feedback,” says Anderson. “Faculty members have all of the tools they need to see if their students are getting their assignments and completing tasks. We’re also using data to show content mastery, which is just as good as the face-to-face model that’s in play during the regular semester. This is our attempt to blend advancement in learning technology with our traditional strength in terms of face-to-face instruction.”

With good results so far, Anderson says the next step is to get more students to sign up. “Enrollment has increased each summer and we hope that this becomes a permanent part of our offerings,” he says.

Although online learning has been a recent effort, Anderson and his IT team are also heavily focused on improving existing classrooms and adding wireless projection capabilities. “Students come in and they expect to be able to project from their iPhone — we’re switching all classrooms from analog to digital to make that possible,” says Anderson.

Anderson says interoperability is also important. “A faculty member should be able to walk into nearly any classroom and know how to use the digital tools because it is all on the same platform,” he says. “Coming from the faculty side, this is a project I’m really looking forward to seeing progress and to see how it helps our faculty with instruction.”

All of Anderson and his teams’ efforts help make Saint Michael’s College a more connected campus. The IT staff is currently underway with ERP migration, moving all administrative services to SQL Colleague by Ellucian.

“We’re building business intelligence into the database to integrate Colleague with Canvas and a data evaluation kit to raise the level of connections and insight into student behavior and their interactions with technology,” says Anderson.

This will tie in everything from a course evaluation survey to Saint Michael’s housing module. “The next focus is really on analytics in our operations,” says Anderson.

Saint Michael’s is also working on a project with Gallup to complete an alumni and student survey to measure the impact of the college experience. “This is another big data source we’re using to gather a better understanding on what we’re doing in terms of technology shapes the experience and the student-alumni sentiment on St. Mike’s,” says Anderson.

A college that understands its students and their experience is one that can better serve their needs. With this mission at the forefront Bill Anderson and the IT team at Saint Michael’s College are further connecting a close-knit campus community.