On a typical day at University of Toledo, Bill McCreary might find himself meeting about anything from product pricing and network router changes to game development, virtual reality and the management of cadaveric specimens.

“I have not found anybody who has a job quite like this at the university level,” says McCreary, vice president, chief information and technology officer at University of Toledo in Toledo, Ohio. 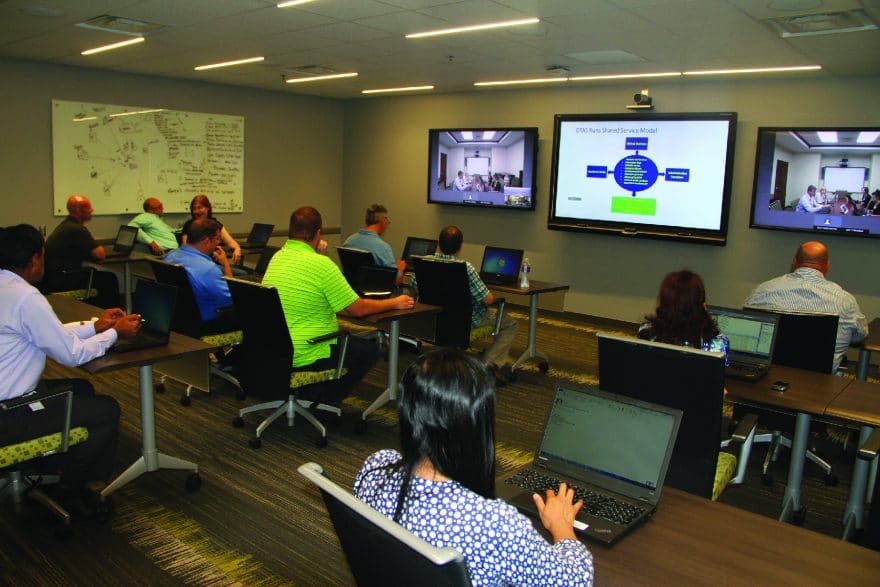 A public research university with over 20,000 students, University of Toledo provides a range of disparate — though similarly technology-centric — academic offerings, degrees and programs, making McCreary’s role central to the institution’s overall mission.

From business and sales training software to game development, simulation training and administrative support, McCreary oversees almost everything on campus related to technology, leading a team of over 300 with a budget of more than $30 million including capital. This broad mandate sets McCreary apart from his contemporaries in the field, who typically focus on a much narrower swath of responsibilities.

“A university CIO typically handles regular administrative IT activities and at a university with a teaching hospital and a large number of clinical locations, the clinical enterprise is typically even handled by an entirely separate IT group,” he says.

By consolidating all of these tasks under one experienced manager, University of Toledo is able to maximize the institutions overall IT efficiency. “Our network is completely integrated and flat. It gives users a better personal experience and has a lot of advantages as far as synergy is concerned,” says McCreary.

McCreary’s path to the CIO/CTO was an unorthodox one, to say the least. Having spent a career working as a senior executive at a number of large, private technology firms, McCreary first came to University of Toledo in 2012 to pursue his Ph.D. in artificial intelligence related to simulation and game design.

“I came here as a student, not a c-level executive. The retirement plan was to do my Ph.D. work but after I was here about a year the university discovered me and asked me to get involved,” he says. By coming out of retirement to work as CTO, the university took advantage of McCreary’s research, as simulation was part of the CTO position.

When the previous CIO left the organization in 2015, McCreary absorbed his responsibilities and hasn’t slowed down since. “I pull things together between administrative IT, academic technology, health care enterprise technology, academic content creation, the simulation center and IT services for community colleges,” he says. In addition to this long list of tasks, McCreary is also the lead game architect at the school’s Advanced Simulation and Gaming Studio.

“It makes for a long day, but I’ve been in enough different areas of the technology sector throughout my career that I can pick up problems quick. The revenue component is novel because you have customers and obligations, so everyone has to be a bit more on their game,” he says.

In his role with the University of Toledo, McCreary oversees all information technology, hospital systems and academic technology needs. Organized under the banner of the Division of Technology and Advanced Solution (DTAS), the CTO/CIO’s responsibilities include overseeing the Center for Creative Instruction (CCI), Advanced Simulation and Gaming Studio (ASGS) and Interprofessional Immersive Simulation Center (IISC).  The merger of all these groups has enabled DTAS to build leading edge interactive simulations and gamified products that deploy on the web, 3D/VIR and head mounted displays using augmented (AR) as well as virtual reality (VR).

Formed in 1993, University of Toledo’s CCI already brought together web developers, software engineers and multimedia professionals to build cutting-edge training programs that can be used in pursuit of the institution’s academic goals and be sold as standalone products.

Working in tandem with McGraw-Hill Education, the unit has already spun-off successful projects such as Anatomy & Physiology Revealed, a cadaver dissection simulation that allows students to gain a better understanding of human, cat and pig bodies through 14 units.  A series of layered images allow students to peel away each layer, revealing over 2,500 unique anatomical structures.

At the ASGS, staff is working to develop game-based simulation software that utilizes artificial intelligence. The team has created and has under development a number of market-ready training simulation products like NSF I-CORPS, which teaches students how to run a startup company and a financial training simulator developed to help plant workers better understand the financial impact of their operational decisions.

The University of Toledo has already taken a number of these products to market, including one program that uses a first-person, video game-like perspective to help train workers in a manufacturing plant.

“We completely game-ified the world of their plant and trainers can configure it into any type of plant they want, making it easier or harder to run or moving it anywhere in the world so you have to deal with different supply issues,” says McCreary.

Called the Manufacturing Simulation Game, the program was initially just going to be used to teach  accounting at the plant level, but pivoted to becoming a fully immersive training simulator before it was done. University of Toledo still performs support for the application, running it as a cloud service with the backend coordinated through Microsoft Azure. “Everything we do is a service, whether we backend it or run the cloud ourselves, so it’s an interesting mix of problems.”

ASGS has also worked to develop a suite of simulation games for the university’s market-leading sales program, The Edward H. Schmidt School of Professional Sales. The Salesworld family of games allows students to accrue simulated sales leadership experience, factoring the results into a student’s final grades and giving prospective employers a better idea of how likely they are to succeed in a real-life management role.

“It’s configurable so you can grow different types of sales people with different personality traits,” he says. “Students play six games throughout their academic careers and then when they graduate they’ll have a resume that compliments their internships in the real world by launching them into tough situations that would take years to experience.”

Having seen some early success within University of Toledo’s own sales programs, the school is now looking to market the Salesworld product to a larger audience through a third-party distributor. “We are looking at several different channels,” says McCreary.

At the IISC, one of the world’s largest integrated simulation centers, faculty work to improve overall health care quality through a set of clinical simulations and surgical skills training units.  The clinical floor of this center contains several fully outfitted hospital rooms that include patient simulators capable of emulating child birth, and ICU or ER.  Built into this facility is an impressive 3D/VIR area where students from all colleges can take advantage of the simulations and games built by the aforementioned teams.

Having just stepped into the Vice President CIO/CTO role in the last year, McCreary inherited a number of technology challenges from his predecessors.

“We’ve underinvested in several key areas in the last decade, so we are now faced with playing catch up. Bringing enterprise applications into the modern era, working on cloud conversion and infrastructure rebuilding; those are the challenges we’re facing right now,” he says.

While McCreary never expected to take such a central role within an organization following his initial retirement, he enjoys being able to draw lessons and best practices from his 45 year career in the private sector to advance the progress and overall professional atmosphere of an institution like University of Toledo.

“I came from a culture of ‘all of us are smarter than any of us,’ and we put together a branding card for this new organization that says the same thing. That’s something that’s been with me for a long time,” he says.

As he looks to the future, McCreary is excited about the prospect of both his own research and the technological advancement of the university as a whole. In the near term, the university is completely transforming its enterprise application system, Banner, which supports the academic and administrative functions.  At the same time, the university is completely transforming its healthcare system as part of an alpha project with Athena Healthcare.  When completed, the Athena system will be one of the first fully integrated cloud-based EMR’s for both clinics and hospitals.

While University of Toledo has some ambitious goals when it comes to the application and revenue-generating possibilities of its proprietary technology products and services, it has found the right man to oversee the push in vice president, chief information and technical officer Bill McCreary.