The data center is no place to be siloed. Not if technology directors want to gauge the impact of their initiatives in the overall scheme of things.

For that reason and more, you’ll likely find Blair Anderson and his team regularly visiting the classrooms of Shawnee Heights Unified School District 450 in northeast Kansas. The veteran tech director emphasizes during a lively discussion with Toggle this past February that they must interact at all levels. 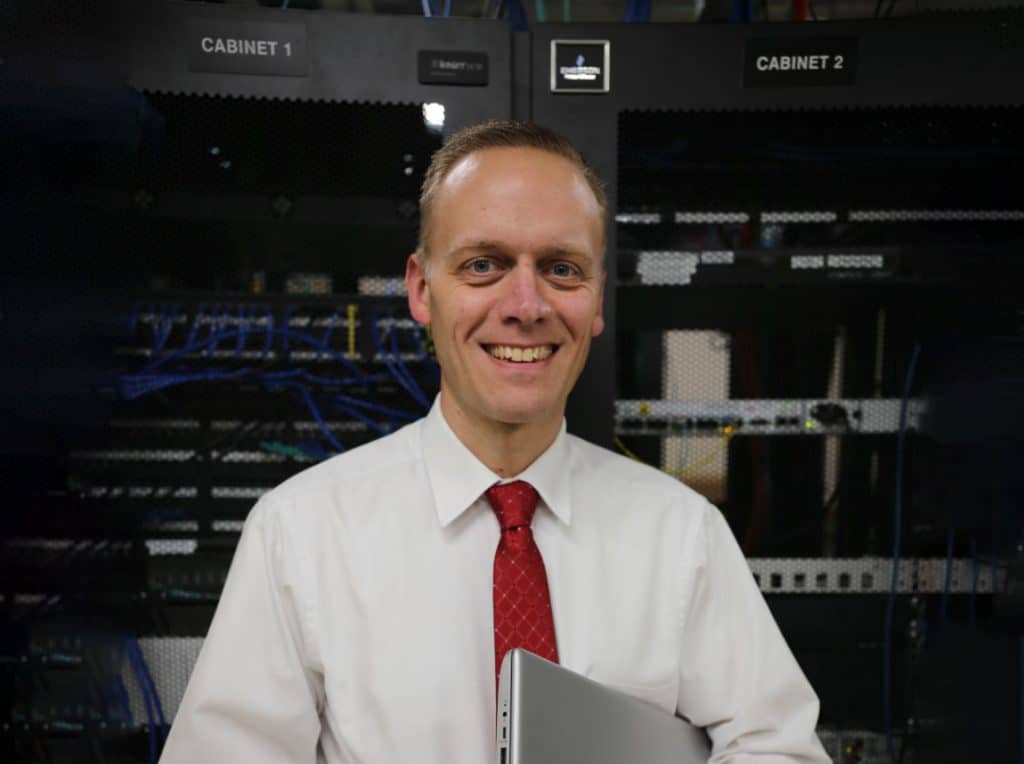 Technology, after all, is a moving target for which a school district must keep pace. Students and staff must be afforded the systems necessary to thrive and the security precautions to minimize online risks. Who better to weigh in than the ones using the systems at Shawnee Heights’ four elementary schools, one middle school and one high school.

“If you’re going to be a good tech director, you’ve got to be in the classroom,” he says. “You’ve got to talk to all the different stakeholders and find out just what challenges they face and how you can make them more successful. You’ve got to remember that without staff and students, you don’t have a job.”

Anderson’s current to-do list is largely building upon the major initiatives of recent years, which include upgrading iPads and teachers’ laptops. He and his team are planning to implement a new virtual server system and mobile device management in the coming months.

As has been the case with previous projects, these upgrades will be preceded by collaboration with all stakeholders. 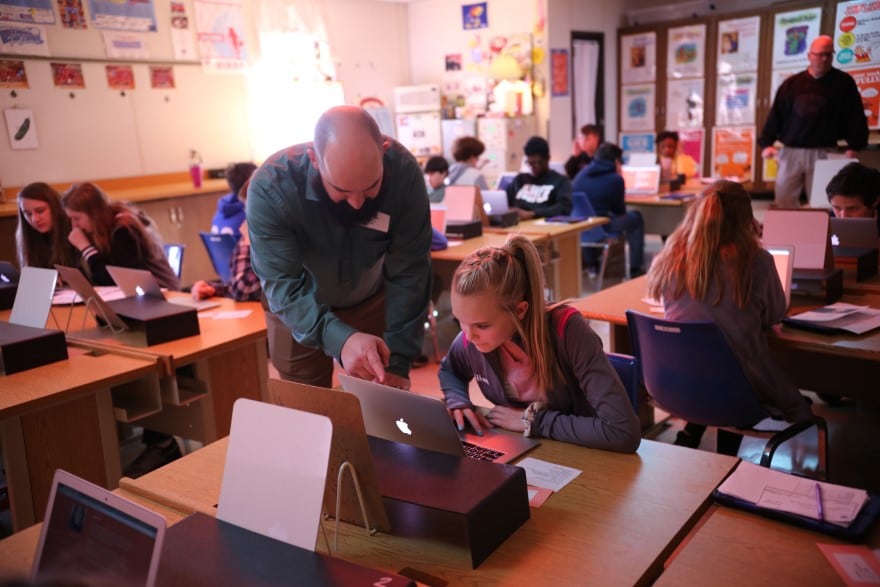 “I’ve seen so many districts go technology-first and develop the curriculum later, but we’ve found the process works better with curriculum-first,” Anderson explains. “Technology is just one of the many tools that teachers have available to them in their classrooms.”

A former music teacher, the personable 43-year-old tech director recalls how the collaborative process was vindicated during a 1:1 iPad rollout for ninth-grade math students in 2016. It didn’t even require additional staff members, though Anderson’s team of six logged more than a few extra hours.

The rollout continued the next year for 10th-graders, with the 11th and 12th grades to follow, and then the middle school. A 2:1 iPad plan is sufficient at the elementary level, at least for now.

From the start of the iPad rollout, a common concern was how a teacher could monitor a student’s activity without walking around a classroom and looking over shoulders. Anderson found a friendly solution in the Apple app Classroom, which enables teachers to control connected devices as well as create workgroups and keep track of student progress with screen sharing. It’s since been a regular item in the teacher’s toolbox. Further security is ensured through Shawnee Heights’ use of the Cisco Umbrella, a cloud-native platform that delivers secure, reliable and fast internet experience. 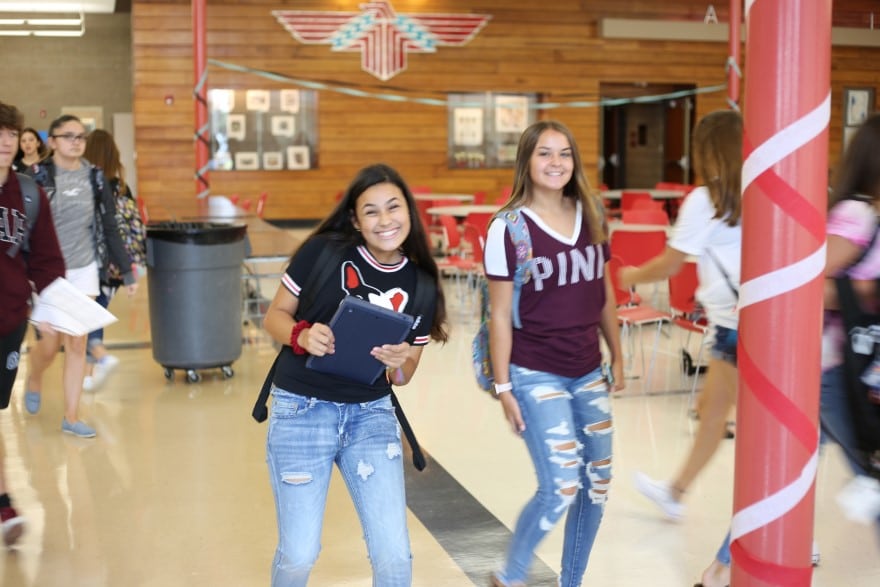 The same interaction went into one of the district’s preceding initiatives allowing teachers a choice between Microsoft and Apple products. Unlike so many other school districts, Shawnee Heights buys rather than leases products, deeming the cost an investment that’s regularly proved it’s worth the expense.

Once reliant almost exclusively on Microsoft, teachers have been opting increasingly more for Macs as the laptop of choice. All the district’s classrooms and conference rooms are equipped with fourth-generation Apple televisions.

Tech director since 2004 and an elementary computer technician the previous year, Anderson credits the school district for a progressive infotech game plan, it understood that technology is vital for preparing students for the jobs of tomorrow.

“We’ve had a supportive administration and board of education that’s allowed us to be forward-thinking and innovative,” he says. “When we’ve been able to prove the need for a system, they’ve provided the funding to make it happen.” 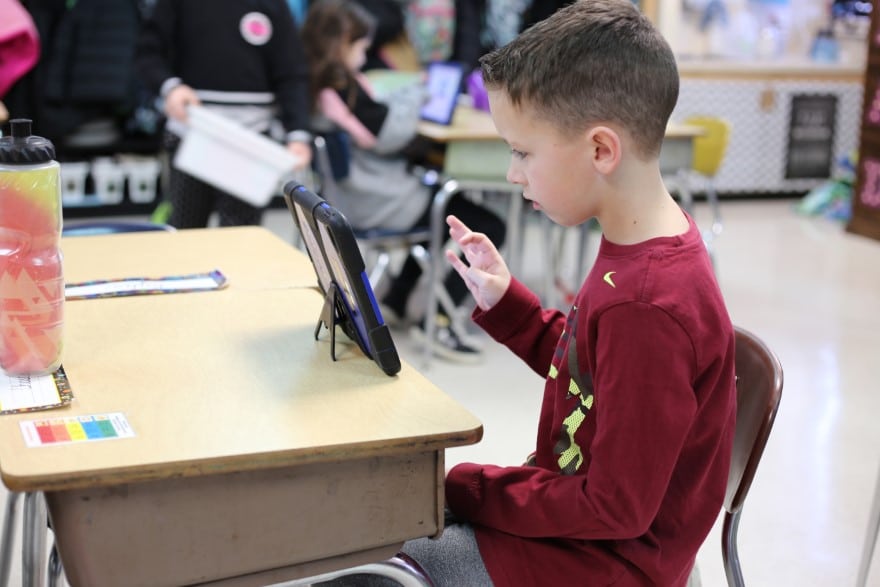 And so much has changed since he took over the IT department, which in the beginning of his career only had two servers. Those first couple years Anderson’s time was largely consumed with rebuilding the network, and that’s a process that never really will end. However, with 65 servers and network access to over 4,000 users, Anderson says Shawnee Heights is meeting its responsibilities.

He’s been part of the district since 1999, his first four-and-a-half years as a vocal music educator—a discipline Anderson says lends itself to IT.

“The more tech directors I meet, the more I find to have been musicians at some point,” he says. “If they didn’t play in a band, they at least played or taught. The detail parts of music and technology are similar. In music you must read ahead and anticipate the next measure. In IT you anticipate the next big move.”

An admirer of Wynton Marsalis, Anderson no longer plays his trumpet as often as he’d like, the mission-driven aspect of his job often affording little time for hobbies. As a Washburn University undergrad during the mid- and late-1990s, he pursued both music and IT, but the latter seemed the better long-term fit. He’d enhance his IT knowledge taking courses at Topeka-based Computer Source. 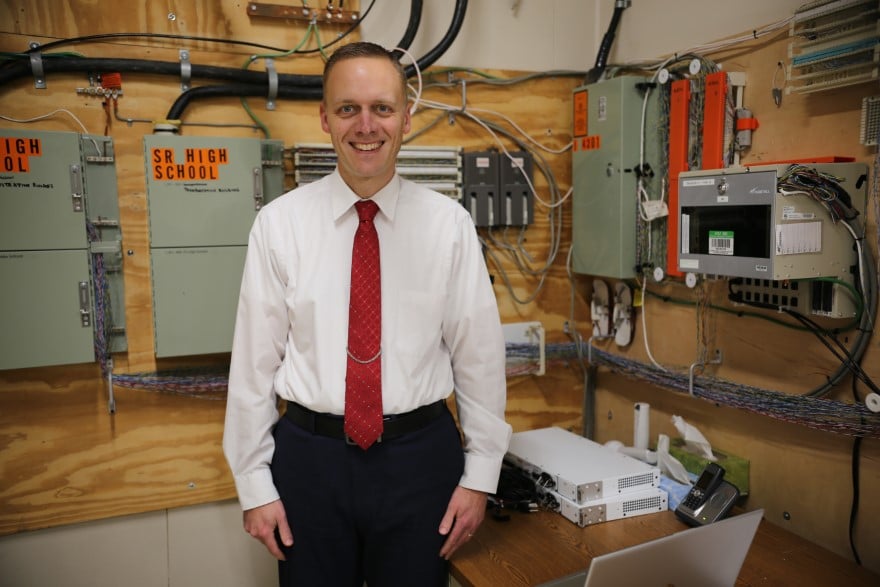 Born and raised in nearby Topeka, Anderson is active in the community, his extracurricular activities including mentoring youth with Big Brothers Big Sisters. He also serves on the board for Mid-America Association for Computers in Education (MACE) and is involved in Topeka Technology Leadership Forum. Photography also appeals to him, Anderson laughingly explaining how it allows him to finally be still and focus on the small details that comprise a fine portrait.

Another part of Anderson’s personality has him working alongside his brother as the pair tinkers with off-road vehicles and riding in the sand dunes of Oklahoma.

“I’m proud to say that we’ll drop anything and everything to help a student or staff member,” he says. “No matter if you’re the director or a technician, if there’s a keyboard or mouse to replace, or a question to be answered, we’re there.”