IT’s all about preparing young people

The rewards—the tangible ones—might be greater in the private sector,  where Bobby Applegate applied his info-tech expertise before circumstances had him, and so many of his colleagues, looking elsewhere for much of 2011.

For their long-time employer, Word & Brown Insurance Administrators Inc. in Orange, California, was undergoing a shakeup and had cut the IT team loose. With other Southern California companies also partaking in downsizings, many capable midcareer techies—Applegate among them—found themselves at a professional crossroads. 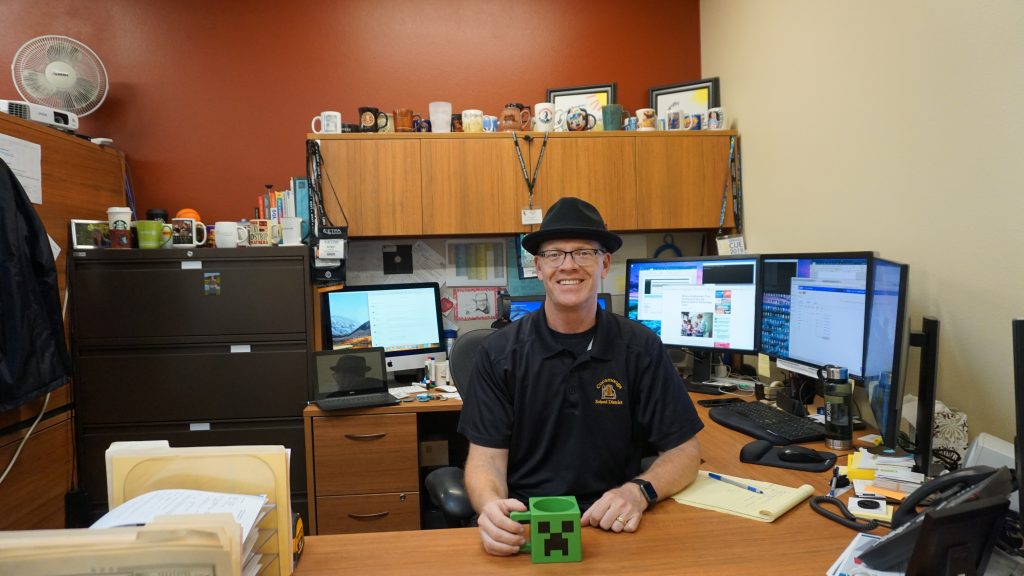 Finally, in early 2012, Applegate was taken aboard as supervisor of technology and information services at the Cucamonga School District in San Bernardino County, where IT accomplishments are apparent in the social and intellectual progress of students rather than just numbers on a spread sheet.

Which is just fine with Applegate.

“What I’m enjoying the most is seeing the results of the labor that my department is in charge of,” he tells Toggle in mid-April, as another academic year enters the homestretch. “It’s the back-to-school nights and open houses and the classroom tours throughout the year. It’s seeing kindergartners playing with iPads and doing things that I didn’t know how to do when I was that age—and older.”

He goes on to describe watching a couple of precocious 5-year-old boys who discovered iMovie without any help from the teacher. Could be that teacher needs mentoring in some handheld devices, Applegate muses, and if so, she wouldn’t be alone.

But there those little boys were, firing virtual rockets at each other,  learning in the process and likely on their way to someday fitting the description of Cucamonga’s “Profiles of a Graduate.”

A very multicultural K-8 district serving 2,500 children through three elementary schools and one middle school, Cucamonga is challenged on many socioeconomic fronts. Nevertheless, the district has ambitions for its students, including its “Profiles” that call upon each grad to be well-versed in such areas as critical thinking and problem solving, initiative and desire, social and cross-cultural skills, empathy, resilience, IT literacy and creativity.

“It’s not all technically focused, but IT has a role in all areas,” Applegate says. “The goal is to make each graduate a well-rounded student who can be the next teacher, rocket scientist or president.” 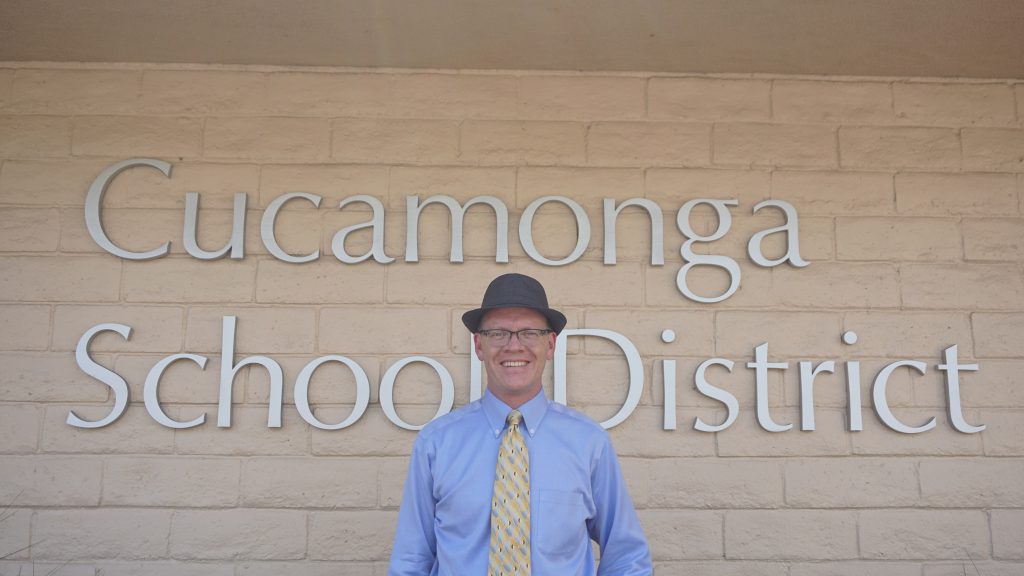 Whatever path a young person takes, he or she is not likely to go far without at least some technical aptitude, Applegate reminds. With the support of his immediate superior, Dr. Michael Chaix, and the progressive Superintendent Janet Temkin, the IT team has been empowered to put in place the pieces necessary to reach the children early—as in kindergarten.

With those two aforementioned 5-year-old boys serving as examples, Applegate says kindergartners take well to touch-screen devices and often need little help in learning the basics of the iPad. By the time they’re in third grade, they’re ready for Windows tablets. Sixth- through eighth-graders are entrusted with Chromebooks, so they can take their schooling home.

“Our philosophy is predicated on the idea that you’ve got to get the technology into the kids’ hands,” says Applegate, adding that the district has succeeded in that area—its 3,000-plus devices allowing at least one for every student, teacher and staffer. “By the time they graduate, they’ll be familiar with the Big 3: Apple, Windows and Chromebook.”

That said, readying such a process took some doing during Applegate’s early years at Cucamonga.

Southern California’s demographics can pose a multitude of challenges for school districts, and that may be especially so at Cucamonga. Two-thirds of the student body is Hispanic, with 21.5 percent of the children being English learners. Nearly 70 percent qualify for free or reduced lunch, and 12 percent are in some type of special education.

The state weighs funding in such districts’ favor, and while it’s much appreciated, it adds to the pressure to perform. Applegate has high praise for Temkin, who started her Cucamonga career as a teacher, ascending the ranks to principal first in an administrative role and then to the overall boss. She saw the importance of IT upgrade even before he was mulling his next career move, Applegate says. 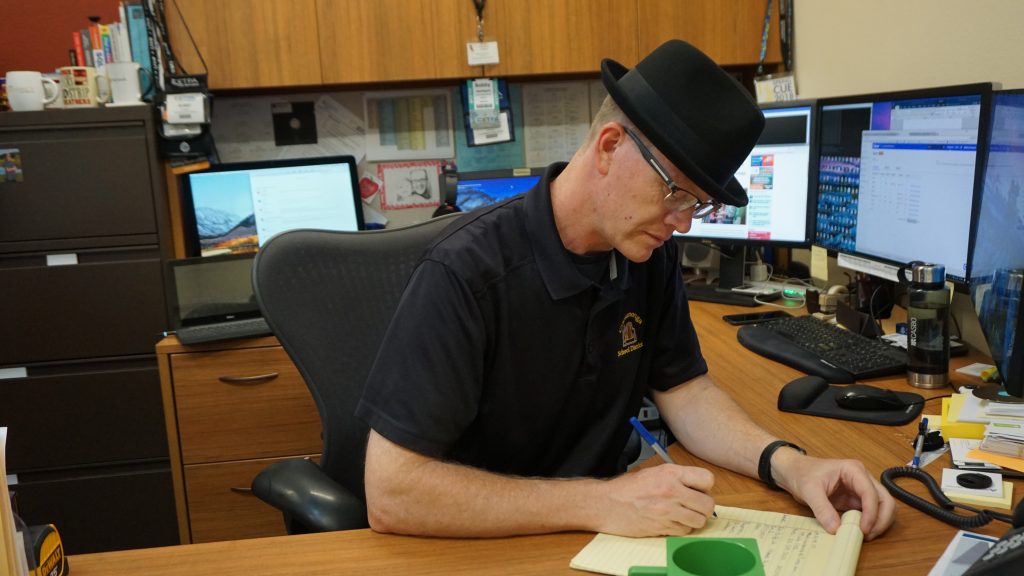 The district had WiFi, but Applegate remembers it as being spotty and in dire need of upgrade, especially with state testing about to go online. Once his team had the new system in place, the networking had to be modernized for the larger capacity. After that came a firewall upgrade, a significant increase in bandwidth and the investment in devices that would leave no student with the excuse of not having the means to progress.

And no one should need reminding of what’s at stake.

“Our focus is to prepare kids for jobs that don’t even exist today,” Applegate says.

A downsizing casualty who picked himself up, the now 50-year-old Applegate can talk from personal experience. The wired world always spinning to destinations unknown, he felt the need in 2006 to finish his BS in technical management with CIS emphasis through two years of night courses at DeVry University, while working full time at Word & Brown.

Then again, he always was drawn to technology.

“In my family, it was always me who would figure out why the VCR was blinking,” he says.

That VCR, of course, is an artifact. The same fate awaits today’s seemingly cutting-edge gadgets.

But what will remain timeless is the responsibility to prepare young people for the ever-changing workplace. Applegate seems to be having fun doing so.

“Everything seems to have worked out for the better,” he says. “I now work five miles from home and have the access and ability to work and play with all kinds of different things and wear different hats. It’s been a real plus for me and, I’d like to think, for the district as well.”