Prior prep paves the path for e-learning in a pandemic

If you turn back the calendar to January 2020, Brad Hagg’s plans to improve the technology at Warsaw Community Schools in Indiana seem pretty mundane now. Topping the list: replacing the aging classroom projectors, followed by upgrading the elementary school computer labs. 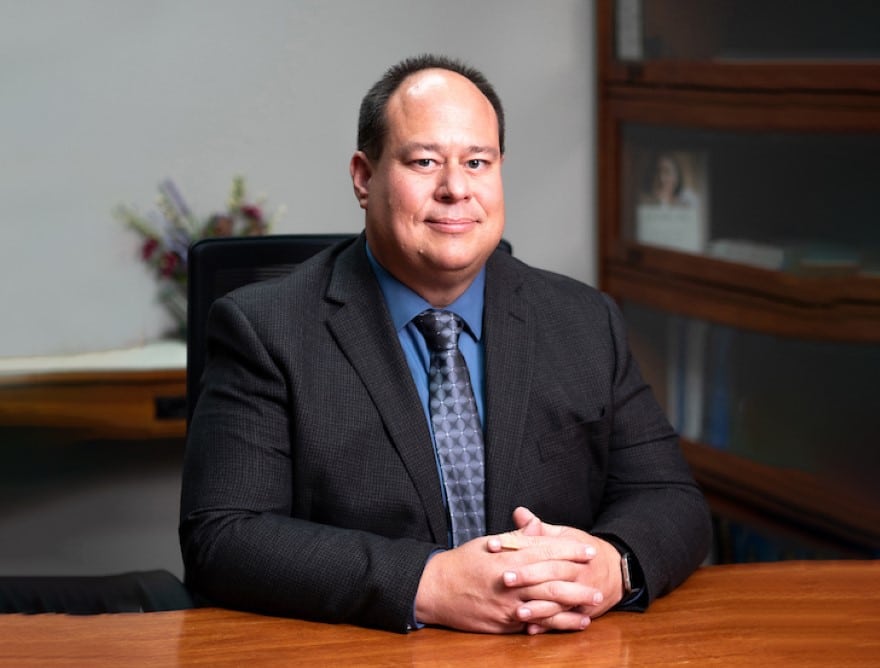 While that was occurring, Hagg, the district’s chief technology officer, planned to continue advocating for increased broadband throughout the district. By early March, his plans changed.

“It’s an incredible time; we are living through some unprecedented days here,” Hagg says. “Warsaw schools were, like many schools in the Midwest, educating students and preparing them for their lives. And then the coronavirus hit.”

The Warsaw Community Schools district serves about 7,000 K-12 students between Fort Wayne and South Bend. With eight elementary schools, two middle schools and one high school, the district is centered in Warsaw but extends into surrounding farmland.

Though the 1:1 program for students in every grade was contemplated prior to Hagg’s arrival in 2012, and Warsaw Community Schools had already installed a private fiber optic network, one of his top priorities when he became CTO was the 1:1 launch. The dividends were felt then and have been throughout the pandemic and school closures. 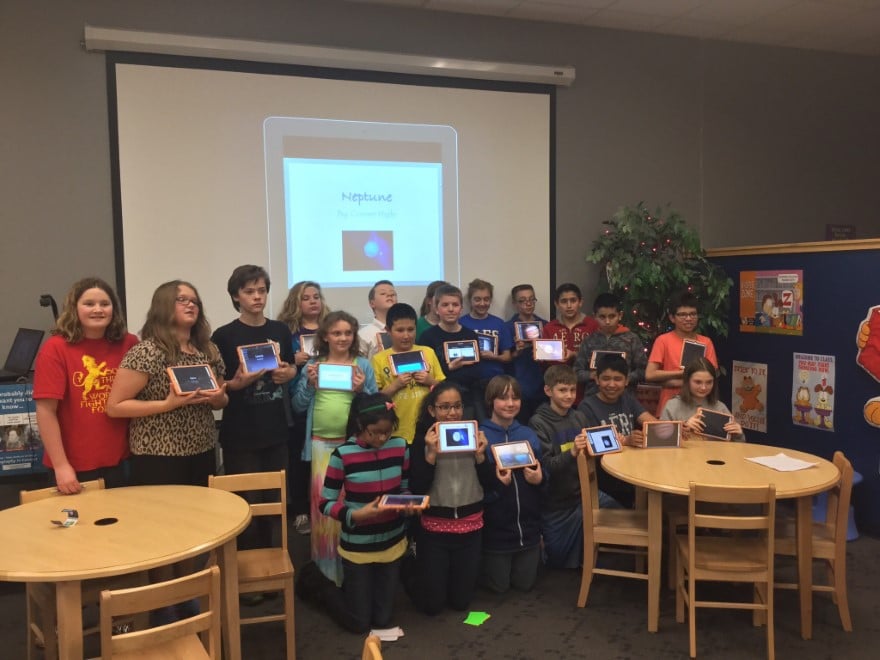 WCS students pose for a picture after completing their individual presentations.

The rollout, completed in 2016, first supplied iPad minis to sixth-grade students in 2013. The device’s built-in tools, including the camera and recording capabilities, suited the educational aims for the district, as did the cost, Hagg says.

“We also loved the fact it didn’t have any hinges, could easily fit into a protective case and provided a great platform for students to create and collaborate,” he adds.

However, the screen turned out to be too small for some applications, so Warsaw schools quickly shifted to full-sized iPads. 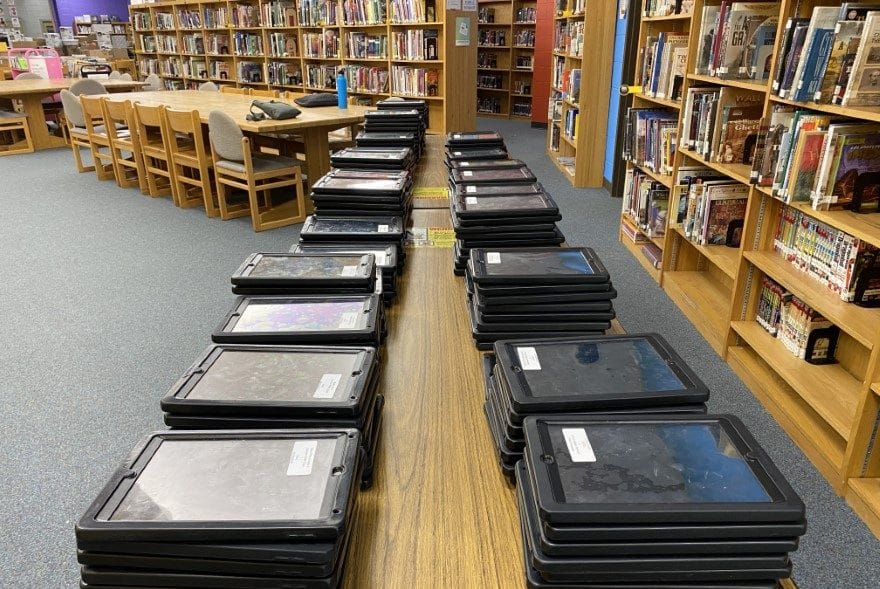 iPads are collected following remote learning during the Covid-19 crisis.

The iPads are supplied in class sets to students from kindergarten to fourth grade. Fifth and ninth grade students receive new devices each year and use them until the end of eighth and 12th grades, respectively, when they get to keep them for personal use.

The ownership component has been crucial to students caring for their devices and has led to a reduction in breakage and repairs, Hagg notes.

While Warsaw Community Schools are well-equipped for a shift to virtual learning, things still got pretty frantic in the second week of March.

The district leadership team, including Hagg, began meeting mid-week as Indiana Gov. Eric Holcomb announced the closure of public schools. Holcomb’s plan waived 20 days for students through the end of the school year, though staff would still have to work. 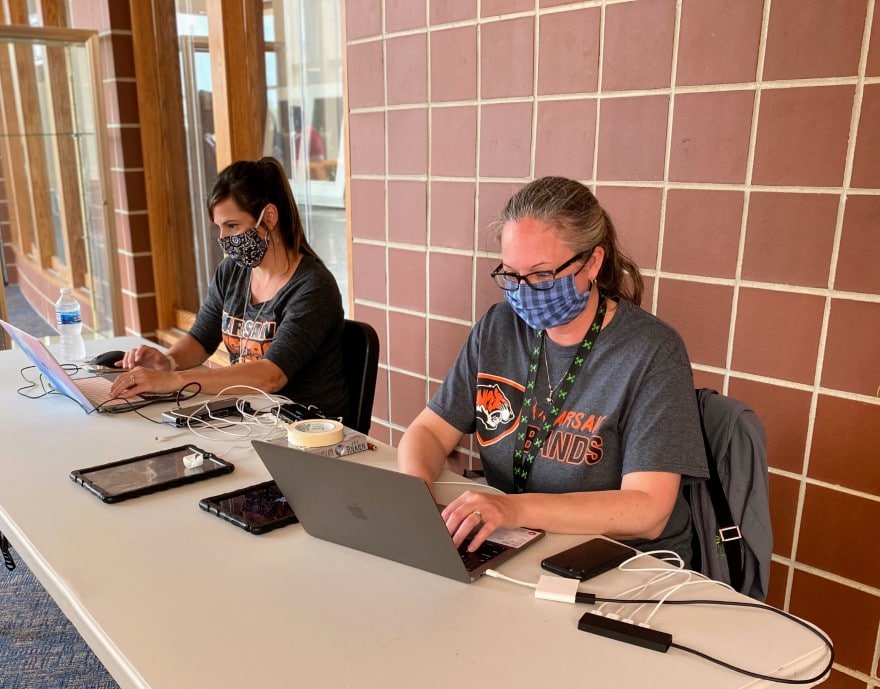 Faced with an option of closing immediately or stretching out those waiver days, Hagg successfully pitched a plan to close March 16 and 17 in order to give teachers time to prepare, and then hold e-learning days on Monday, Wednesday and Friday for the rest of the school year. Tuesdays and Thursdays became waiver days.

The plan to get the district through the scheduled end of its school year on May 22 was accepted late in the morning on March 13. 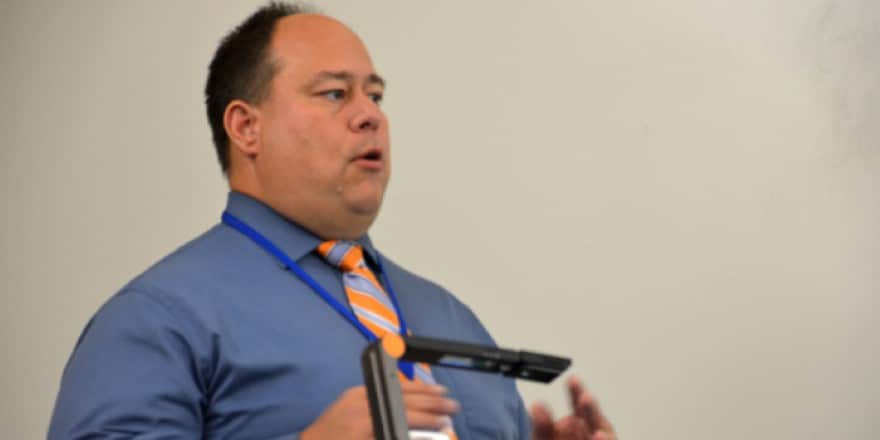 Hagg delivers a proposal to the WCS School Board

Even then, he had other meetings to attend, but his technology team of 17 spread out across the district, especially in the elementary schools, to prepare devices. Because students through fourth grade are not assigned specific iPads while in class, the tech staff also had to track which student got which device and remove all of the charging bricks and cables from the classroom charging stations, Hagg adds.

Teachers are provided iPads and a MacBook or PC-based laptop, Hagg says, and those were already set up for some virtual learning as Warsaw Community Schools had created e-learning days for school closings due to inclement weather. 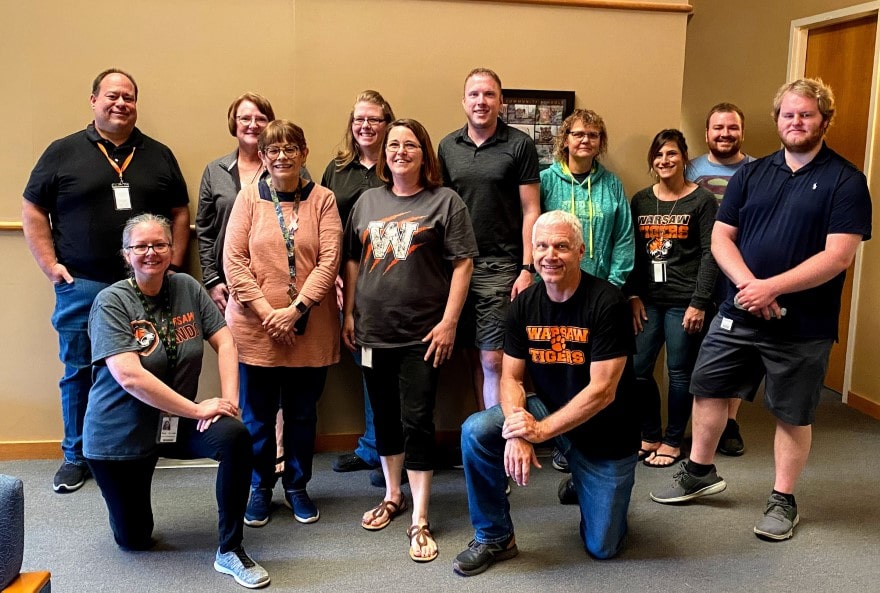 Members of the WCS technology team take a break from preparing 1:1 devices for the 2020-2021 school year.

The district’s educators use the Canvas learning management system as well as Google Apps for Education and were able to use the advanced conferencing features when Google opened its premium tools for free use by teachers and students. Techsmith Snagit screen capture tools were also in use, as was Seesaw, which provided more visual content for students from kindergarten through second grade, he adds.

Add Cisco Webex and Zoom for internal communications and Warsaw Community Schools had the means and the tech for productive learning days. Internet access, though, is another issue.

“It was already on my list of goals to advocate for bandwidth throughout the district,” Hagg says. Downtown Warsaw is served by several providers, which offer discounted services for low income families. The schools, library and local businesses have all boosted Wi-Fi signal strength to enable high speed internet service use outside their buildings.

But Hagg’s BrightBytes data demonstrates that 7 percent of students do not have internet access. Of the students who do, 22 percent of them lack quality internet service. To address this concern, the school district created mobile hotspots by parking 36 buses with Wi-Fi throughout the district on e-learning days. 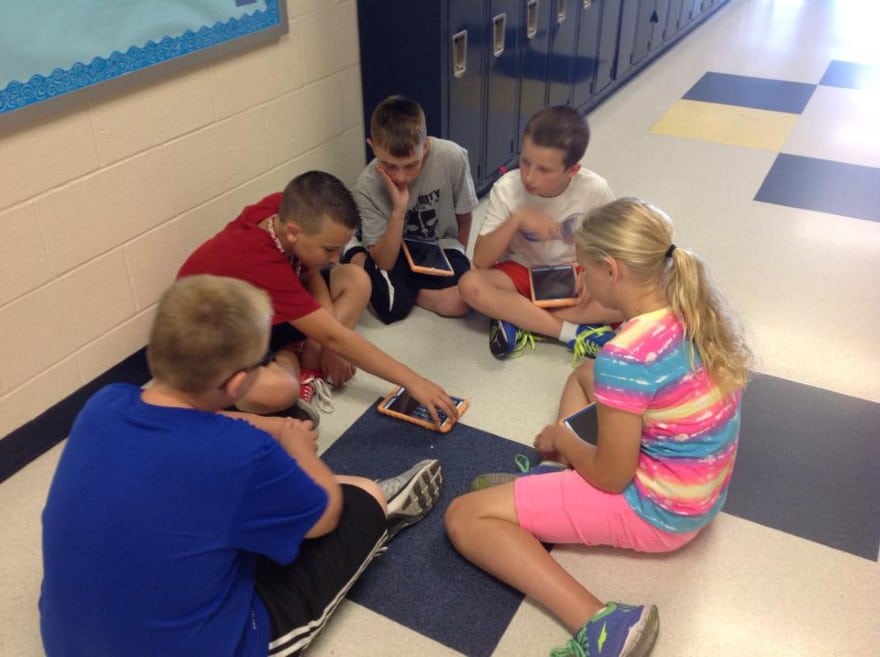 Students collaborate in the hallway on a group research project.

His other plans are on hold. The technology team will triage the projectors and replace items as needed. The computer lab project can wait another year, Hagg says.

“Unprecedented days” indeed, but Hagg has enjoyed working through them while serving the community where he grew up.

After earning a bachelor’s in elementary education from Indiana State University in 1993, he’s never strayed far from his roots. He was a network administrator at Biomet, which manufactured medical devices in Warsaw, then shifted to education in 1998.

For almost 14 years, Hagg was director of technology at the nearby Tippecanoe Valley School Corporation, and in September 2012 he began his current position in Warsaw. In 2016, he earned a Master of Education in educational leadership and administration from WGU Indiana. 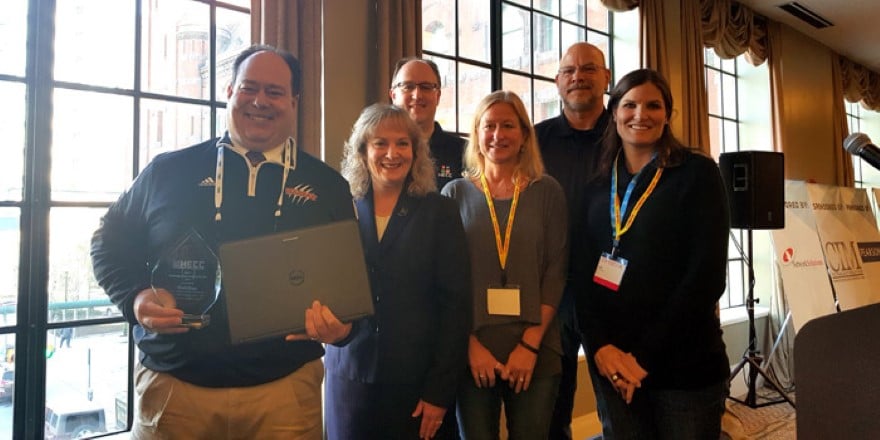 Hagg awarded the Technology Coordinator of the Year award by then Indiana State Superintendent of Public Instruction, Glenda Ritz.

While he’s been a catalyst for change and he and his staff have made remote learning possible in a pinch, Hagg’s still eager for schools to reopen in the fall.

“This crisis has definitely established the power of e-learning with me, but I’ve always felt our teachers are amazing in the classroom and what happens there every day can’t be replaced by virtual learning,” he says. “I am excited about what this will look like one, two or three years down the road. Teachers are continuing to engage in professional development to be better equipped with the technology skills they’ve been using, and I’m eager to see how it transforms the learning process when our students and teachers return to the classroom.”