While Bruce High, the county’s chief information officer, is primarily focused on technology, he’s proud to support the county’s public safety efforts. Given the fact that High started as a deputy, that’s understandable.

“Giving back to the community that’s given so much to me, especially in the public safety area, every day is exciting,” High says. “I look forward to getting back to work on Monday.”

It makes sense, then, that one of High’s prized projects is the radio system—the largest in the U.S.—operated by Harris County and its public safety partners throughout the region. That includes 110,000 radio devices and more than 130 inter-local agreements with the public safety entities that use them.

High started his career in a Harris County constable’s department, where he took care of IT needs—the radios, computer aided dispatch and vehicle fleet. While he was there, he worked his way through sheriff’s academy and became a deputy assigned to a civil district. From there, he moved to the county commissioner’s office, where he worked for 8 years and continued to take care of IT needs, this time at the commissioner’s level. 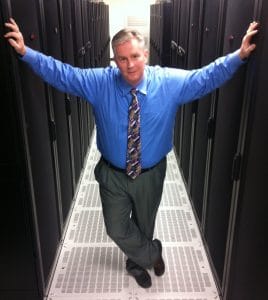 High left the public sector for a 10-year stint in the private sector, where he eventually became director of customer-facing apps for BMC Software.

In 2006, the county asked High to come back, with the hopes he’d succeed the CIO. “It all worked out, and I’ve been the CIO for a little over eight years,” he says.

High’s combination of deputy experience and time spent in both the private and public sectors gives him authority and perspective.

“Being in law enforcement, you either wore a badge or you didn’t, so [my background] helped me, when I came back, to establish those relationships and trust to enable these technologies that these people can count on,” High says. “Understanding their priorities, I think, was a big plus.”

Since coming back, High has worked with law enforcement to make Harris County one of the first in the nation to implement LTE broadband for public safety. His IT team is implementing a new jail management system, replacing the legacy justice information management system and replacing an outdated computer aided dispatch (CAD) system.

Several years ago, High’s team decided that every solution it wrote would include latitude and longitude data so it could generate map-based reports.

“I think that’s when the data became real to decision-makers, when they [could] actually look at a map and see and do those queries specific to an area, or specific to a geo fence, that is interesting to the citizens but also to the decision-makers on where to put their resources,” High says.

Law enforcement is a perfect example. When officers arrive at a scene, they want to know if it’s an abandoned house or if the residents are paying their taxes—things they may not have considered before. The new CAD system will be able to share that information, often from disparate databases, with the 130 agencies that use Harris County’s radio system.

“Crooks don’t know precinct lines; they don’t know county lines. They just conduct their business,” High says. “Now, we can share that information so you know as much as you can to make a decision necessary when you’re out in the field. It’s amazing. That initiative has really taken off.”

“A lot of things start out as a proof of concept but quickly become a production need, and that’s exciting, I think, seeing the people recognize and realize what you’re implementing and what it’s capable of doing for them.”

Keeping the lights on

High’s team is also building the infrastructure to support body cameras for the police.

“The demand is how do we get the information that is current and accurate to the individuals to make life and death decisions,” High says. “One of the mechanisms is to give them the infrastructure that they can count on to do that, but in the background you’ve got to have those core systems in place that support the business.”

In addition to the public safety work, High’s team is working on major initiatives like building a new enterprise resources planning (ERP) system, which will support the county as a whole.

“If you remember the hoopla around the year 2000 and how the world was going to stop,” High says, “they crammed [an ERP] solution in, and now we’re going to replace that.”

When High came back to Harris county, after his stint in the private sector, the country was heading into the Recession. The county was still running on legacy systems like the ERP system, but it was ready to start operating as a business. It was looking to IT to enable that business.

“Harris County was looking to IT to find the efficiencies and ways we could improve the way that we do business,” High says.

To this day, High’s team looks for efficiencies. It has tech committees around various business functions and uses those to drive solutions. “What I tell the business is, to work with them, I need to understand your business in order to enable it, not to run it.”

No matter which business committee the IT team is working with, High says, “impact-wise it all comes together to be one big way we can conduct county business.”