When it comes to IT, Cabarrus County Schools has three major things going for it—or rather, three people: Dr. Katherine “Kelly” Propst, Michael Stocks and Adam Harkey. The trio has a unique management style, which helped build the most robust school district IT network in the state and keeps 36,000 devices up and running.

Propst, Stocks and Harkey play off of each other’s strengths. Propst contributes a doctorate in organizational management. Harkey is the lead engineer, the one watching the systems; and Stocks directs the technicians and engineers, helping them organize and shoulder a huge amount of work. 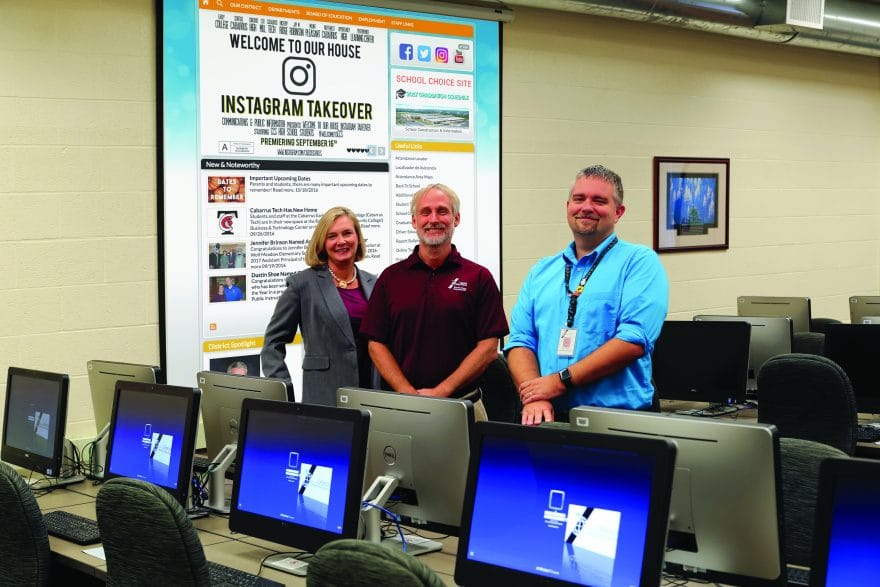 Cabarrus County Schools is a North Carolina district with 32,000 students, 5,000 employees, 44 facilities and 36,000 computers. The past few years, it’s invested millions in infrastructure, and it now has one designated device for every student in grades three through 12.

The Friday Institute—an initiative of NC State University’s College of Education—named Cabarrus County School’s tech infrastructure as the best of any local education agency in the state.

Propst was thrust into the technology role during the Recession when the district’s chief technology officer left and she was put in charge of IT.

“I will tell you upfront that I am not a techie,” she says, but she has her own spin on the responsibility and enjoys it.

Propst has worked in the district for 32 years and has a full plate overseeing accountability, after school programs, state testing, school nutrition, transportation and of course, technology. In the technology department, she takes the organizational leadership role and leaves more technical aspects to Stocks and Harkey.

“I do all the managerial, budget and strategic planning for the department. Michael [Stocks] and Adam [Harkey] are the “tech gurus,” the ones behind the curtain that make it all work,” Propst says.

Both Harkey and Stocks have been with the district for 18 years—Harkey came right out of high school—and together they built the district’s 10-gig network.

Harkey is a 24-7 player. It can be 3 a.m. and Propst knows that Harkey has a pulse on the network. He oversees things like the district’s data storage, firewall management, internet filter and network patches.

“Adam [Harkey] is where the rubber hits the road with the implementation of our projects,” Stocks says. “We trust Adam to make it work.”

The small-department is able to serve so many through good communication, weekly meetings and an ego-free culture where no person is more important than another, and everyone’s insight is seen as equally valuable.

“We weren’t always like this in the technology department,” Stocks says. “Eight or 10 years ago, we were not a true, cohesive team. We had a different leader. We had a different set of employees. The morale was pretty low, and while we were still functioning, it was like work; I guess [that] is the honest way to put it. Over the past seven or so years, we’ve really built the department into a true team, and I guess that’s kind of the secret.”

Despite being the one who is ultimately accountable to the board, Propst says her strategy is to give employees as much autonomy as possible, even if that results in occasional mishaps.

That approach seems to be working. Harkey, a major IT talent, was heavily recruited by the private sector and left for eight months. He returned to the district, though, because he says it feels like family.

The benefit of having a leader like Propst, who understands the political side of things, was made clear a few years ago when Propst happened to be at a meeting where the district was deciding how to allocate federal Stimulus funding.

Maintenance had been taking all of the money in discussion, and Propst made the argument the technology department should get some of those funds. The district agreed and swung about $3 million to IT, Propst says.

“Without Dr. Propst being at the table, we wouldn’t have even known that there was money out there,” Stocks says.

After it invested that $3 million in its 10-gig network, Cabarrus County Schools began investing in devices. To make sure students are comfortable on all types of devices, the district has Macs in the elementary schools, PCs in the high schools and Chromebooks in grades three through 12.

Ultimately all of the technology department’s work comes down to making the best decisions for Cabarrus County students.

While the district has a 1:1 program that assigns a designated Chromebook to each student in those grades, students do not take the devices home, as they do in most 1:1 programs. That is to extend the longevity of those devices and save the district money in the long run. The district does allow students who don’t have computers at home to check out devices.

Ultimately all of the technology department’s work comes down to making the best decisions for Cabarrus County students.

“It’s about trying to find a balance,” Propst says. “You can’t just put a device in a kid’s hand all day long. That’s not right either. Finding that happy balance of when you do use technology as a tool, and when you do not—that in itself is an art.”