When Janet DeBerardinis joined Caliber Collision in July 2011, the company had 86 locations. Today it has more than 475.

The smart technology framework that made that growth possible was built by a team headed by DeBerardinis.

Caliber Collision is the largest collision repair company in the U.S. It’s striving to improve the image of the collision repair industry by making its services clean, timely and professional, using technology to enable this growth and customer focus. 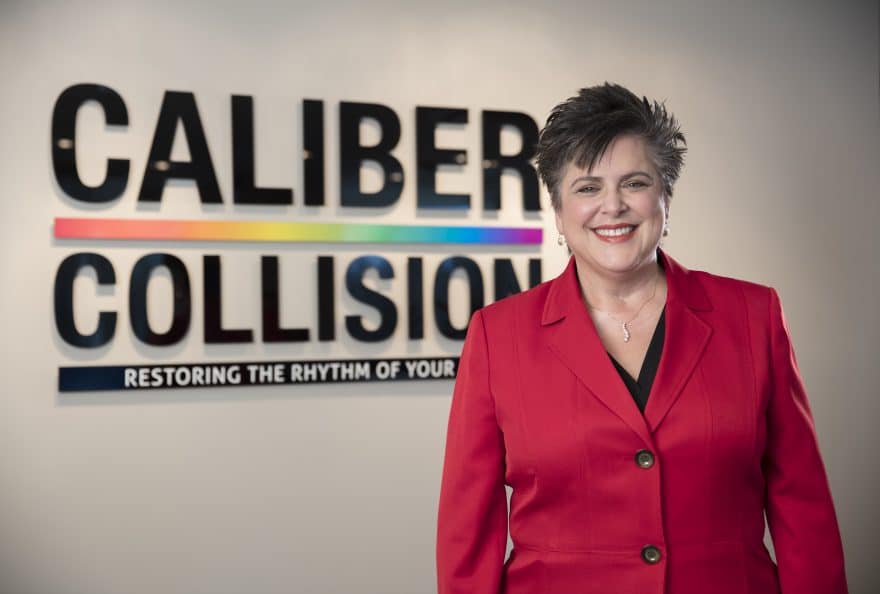 Internally, DeBerardinis and her team are using technology to support the company’s family-like culture, which in turn, makes the company even stronger.

Thanks to its focus on tech capabilities, the company is experiencing “hyper growth.” It is not uncommon for Caliber Collision to acquire anywhere from one to five collision repair shops on any given Friday.

Five-or-so days later, Caliber sends one of its many key partners, Lighthouse Communications, to the new locations. Lighthouse swaps out all of the locations’ hardware and installs new desktop computers, which are standard across Caliber’s network. That’s the hard conversion.

With each acquisition, new locations are folded in and business continues as usual.

Caliber’s mission is to “restore customers to the rhythm of their lives,” by making technology an enabling force, not a roadblock.

The company’s stated goal is to double its business every three years, and so far, it has exceeded that mark. With more than 475 locations, Caliber is in 17 states and has more than 9,800 employees. In addition to acquiring established collision repair centers, the company is also building new locations from the ground up. Those fold into the flow of business just as easily.

While DeBerardinis expected Caliber to grow, she never imagined the company would grow so quickly.

A virtual framework for growth

When DeBerardinis joined Caliber, notifications that customers had a collision came in via fax. Then, optical character recognition (OCR) software converted the printed and handwritten image files into machine readable text and sent it to a database—with “maybe 50 percent accuracy,” DeBerardinis says. Once the claim was in the database, someone in the call center would call the customer to arrange an appointment.

DeBerardinis knew that in order to have any significant growth, Caliber would have to transition its services from the physical world of faxes to the virtual world of software as a service (SaaS). Then, it would need to move to the cloud. DeBerardinis made that three-step transition happen in just 24 months.

“Now, that data is coming in as ones and zeros,” DeBerardinis says. ”Immediately, as it’s reaching our database, we are reaching out to customers.”

DeBerardinis and her team of 29 employees did build two tech tools from the ground up—Caliber’s schedule and capacity planning tool and a single sign-on employee dashboard—because no provider had a tool that could meet Caliber’s unique needs.

“Those tools that are really game changers for Caliber; those are the ones that we built because there wasn’t anything off the shelf and we knew they would make a difference,” DeBerardinis says.

Just as she chose off-the-shelf software, DeBerardinis chose partners who could provide off-the-shelf services. While Lighthouse Communications swaps out and maintains the hardware at Caliber’s 475-plus locations, LAM Technology provides telecom services and Sparkhound provides IT support for Caliber’s cloud-based software, which lives in the Microsoft Azure Stack hybrid cloud, and assists Caliber’s IT team when it launches new products. Advanced Office supplies Caliber’s Ricoh devices, which DeBerardinis says are critical to the company’s efficient paperless model.

“I learned long ago in my career how effective this can be,” DeBerardinis says. “We’re in a world where our IT organizations need to be lean and effective. Big IT organizations, where you’re tripping over each other, is a thing of the past. You must leverage world-class partners.”

This approach to technology isn’t just about building a framework so that the company can grow; it’s also about making life easier for Caliber’s employees and improving customer experience.

Caliber’s mission is to “restore customers to the rhythm of their lives,” by making technology an enabling force, not a roadblock.

With custom-built apps, customers can scan and document a vehicle’s damage before it even arrives in the shop to receive a virtual estimate.

Technology benefits Caliber’s staff, too. For instance, staff can take tablets to a vehicle when it arrives at a collision center, enabling them to scan and document damage and create estimates from the shop floor site.

“How game-changing is that?” DeBerardinis says. “It sounds easy, but if it wasn’t in place, just imagine the extra steps.”