The College of Saint Benedict and Saint John’s University have separate presidents, separate boards of trustees and separate budgets. But they share the same IT department.

This creates a lot of busy days for Director of IT, Casey Gordon, who says a major part of her job is providing students at each location with a similar level of technology and service.

While Saint Benedict’s houses only women and Saint John’s houses only men, students enrolled at either the university or the college can take classes on both campuses, which are just six miles apart. 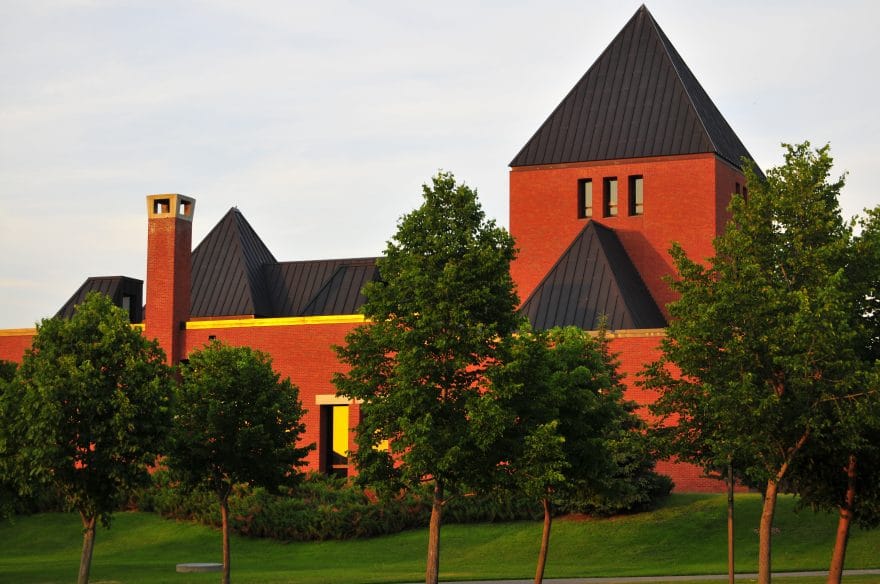 As a result, Gordon spends a lot of time asking students and staff what would make their experience between the two campuses feel more seamless. One of the keys to achieving this harmony is making sure each campus has similar access to support and resources.

“[I have to consider] does this benefit one college or both?” Gordon says. “How does an initiative affect the budget of each college?”

One for all, all for one

Gordon says the renovation of the Alcuin Library at Saint John’s is an example of how work on one campus affects the other campus. Among other changes, the renovation will join two separate IT-related services (one services hardware and the other is a general help desk) by putting them in one room instead of two rooms, which is more convenient for all.

While the Technology Commons will make the library at Saint John’s more convenient, Gordon says she must find a way to create a similar experience at Saint Benedict’s.

To do this, librarians and IT staff are collaborating so that the Saint Benedict library can also join the two related services into one space. Even though the floor plan will be different and they haven’t yet hammered out all the details, Gordon says it shows how the two campuses share innovations.

The IT staff sees online-accessible programs as another way to create a consistent experience between the two campuses. For example, the Computer Science Pilot Program will simplify how computer science students access the operating systems they need to do their work.

Traditionally, the computer science lab has one set of computers running Linux and another running Windows. The pilot program will allow students to log into a website and run virtual simulations of each operating system online—all from a single computer.

“Computer science students are playing [with both systems] all the time,” says Gordon. “They can pop up Linux on their computer, then close out and work on their Windows [system].”

Not only does this mean the school will cut costs on computers, but students will have the option to use their personal devices, allowing them to work from anywhere they choose.

That’s also the idea behind Gordon’s efforts to incorporate what she calls “anytime, anywhere technology”—online systems that can be accessed as easily from a campus desktop as a personal laptop.

One way the IT department is doing this is by supplementing its on-premises file storage system with an online system. While they work on this project, Gordon and her team have given campus members access to OneDrive, a tool that provides every member of the college with five terabits of storage, accessible anywhere.

For a long time, students and staff mostly accessed their work on campus and could only do so remotely through a confusing series of steps. Gordon says she and her staff are simplifying the process by creating a tool that gives faculty and staff secure access to campus servers from anywhere in the world using their university-issued laptops.

Storing more data online is more versatile, but can create risks. Malware-infested phones or laptops can infect other systems on the network and compromise private data. If mobile devices are stolen, non-campus members could access private information on the school and its faculty and students.

Gordon says the threat is magnified as students use more mobile devices than ever before: “students used to bring one computer to campus—now people have four or five devices: they might have a laptop, an Xbox, a Roku, a tablet and a phone.”

Unlike the private sector, where companies can easily restrict access to servers and control the programs and apps employees install, universities must give students and faculty a certain amount of leeway to conduct research.

“In higher education it’s very important to allow open access,” Gordon says. “If faculty are trying to research and you have something that locks [their internet access] down, you’re inhibiting their mission.”

To achieve a middle ground, she uses system that, for example, requires users to have a passcode on their mobile devices if they’re going to be connected to the schools’ servers. She says that requiring everyone who connects to school servers to have passcodes can assist in preventing hackers from gaining access in the event of a theft. Similarly, Gordon says that whenever mobile devices connect to a school email server, they are automatically encrypted.

For Gordon, one of the most exciting things about creating a secure, easily accessible network is that it lets students treat their two different campuses like one, vast space.

“A lot of our research is about creating spaces that let students and staff do different kinds of work in the manner that they prefer,” she says.

Even though the budgets and leadership at each school may change over time, collectively, they will remain an easy, free space to learn.