As vice president for information systems and technology at the University of Central Arkansas (UCA), Chris Davis is responsible for meeting the technology needs of more than 11,000 students and 1,350 faculty and staff members.

Overseeing the Division of Information Systems and Technology (IST) and a staff of more than 40 employees, Davis has been with UCA since mid-2014. With an annual budget approaching $5 million, Davis and the IST staff handle the university’s full range of technology needs, including network and administrative support, programming and operations, security, enterprise resource planning (ERP) software, database administration, user support, help desk assistance and instructional technology. 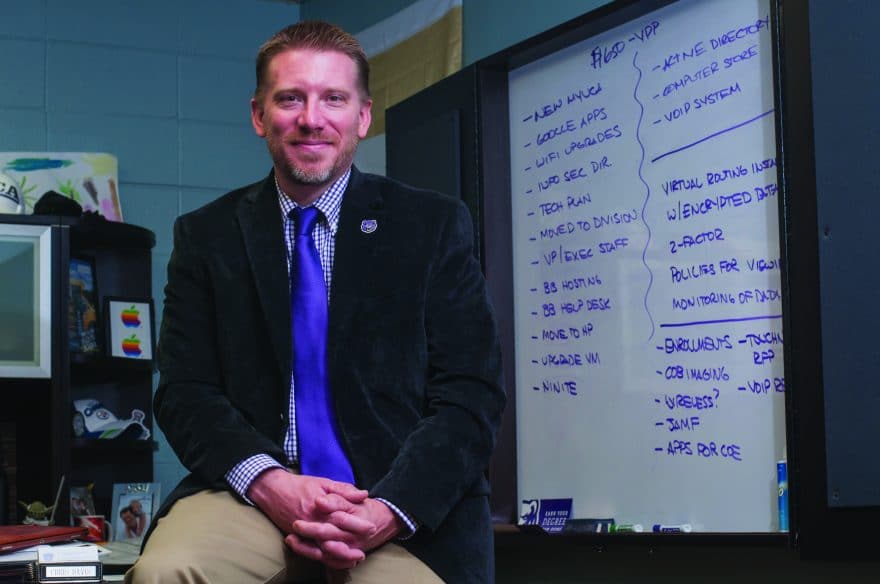 Davis’ journey to the top of UCA’s Division of Information Systems and Technology started in 2001 when he was teaching high school social studies in Spring Grove, PA. While he enjoyed teaching high school, he decided that technology was his calling and moved into a career as a database administrator in the education realm. For Davis, it was the logical outlet for a lifelong passion.

“I started programming when I was 11 and building computers when I was 12 or 13, though I can count on one hand the number of technology classes I took in college,” he says.

While he was gaining experience in the technology realm, Davis never left the classroom far behind, teaching in an adjunct or part-time role at colleges and universities for nine of the last 13 years. This allowed Davis to not only remain connected with the needs of students, but see firsthand how technology was being integrated into the classroom.

The integration and acceptance of technology has also been a boon to the tech professionals who make it all happen and are increasingly given a voice in the decision-making process as a result. Davis has seen this reflected at UCA where he transitioned from the role of chief technology officer to a vice president-level position in January 2016.

“I think we’ve seen an evolution where higher education recognizes that we have to function as a business,” he says. “That’s why IT is now a vice president-level position at UCA and we now definitely have a seat at the table.”

Building a 21st century IT department

In a little more than two years with the university, Davis has overseen a number of major technology upgrades and improvements, including the migration from GroupWise to Google Apps for Education.

Davis has also led the charge to adopt a hosted Blackboard solution, developed a plan to move from Novell eDirectory to Microsoft Active Directory and is currently working to improve the institution’s IT infrastructure with upgrades to a fiber-based network and increased wireless networking capabilities.

Davis and the IST division recently completed a data center refresh that saw the university work with Hewlett–Packard to virtualize a large portion of its data center. “It makes backup and recovery a whole lot easier,” he explains. “Cost goes down and power consumption goes down, so it’s a win-win overall.”

The vice president for information systems and technology has a vision for the future on the school’s on-campus wireless network that he calls the UCA Dome. “The idea is that as soon as you walk onto campus you connect with wireless and can roam with that coverage,” he says. The vision is a response to the rapidly changing needs of the modern student population, who are increasingly demanding high-speed wireless connections in the classroom and beyond.

“Mobile is the direction that our students have gone; our students just aren’t tethered by Ethernet cords anymore and for a college to survive and thrive we need to adapt to the student culture,” Davis says.

Working behind the scenes

Working diligently behind the scenes, Davis has led a massive expansion of IT services, but they might not always clock on the radar of the average student or faculty member. “A lot of the projects we are doing now aren’t flashy, but they’re necessary,” he notes. “The staff and I have done such a good job of making things work with very little resources that nobody understands the pain of expansion.”

To some extent, Davis says that the IST division at UCA has been a victim of its own success. Working with so little for so long, IST was still able to offer a consistently high level of service. Now with multiple updates and migrations in the works, the department is stretched thinner and often met with a level of impatience. “People understand we need to do this, but not to the extent that technology people do,” says Davis.

While the importance of the role of technology on campus has been increasingly acknowledged in recent years, Davis says that resources in the form of both employees and funds often fall short in the world of higher-education IT. “I lose people to the private sector all the time and sometimes I get frustrated because I feel like I am training people to send them out to professional world,” he says. “If you work in higher education you have to want it because we’re not all about making money; we are about student success.”

In the coming five years, Davis will oversee the implementation of UCA’s new technology plan. “The big thing on the horizon is growing and really cultivating these programs of distinction that we have and getting more national recognition,” he says. “We’re also looking to grow online education.”

With a passion for education and commitment to student success, Chris Davis, vice president for information systems and technology at the University of Central Arkansas, will continue to serve the university with leading IT support, planning and implementation. 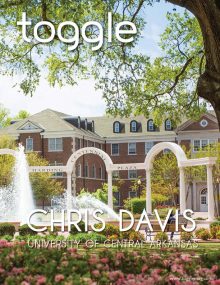