When the Columbia Public Schools (CPS) coordinator of practical arts had the idea to load a bunch of high-tech educational equipment (think: 3D printers, robotics tools and projectors) plus educational toys like Legos and an X-Box on a school bus so that CPS could bring that technology to students at all of its schools, the district rolled with it. The STEAM Bus was born. 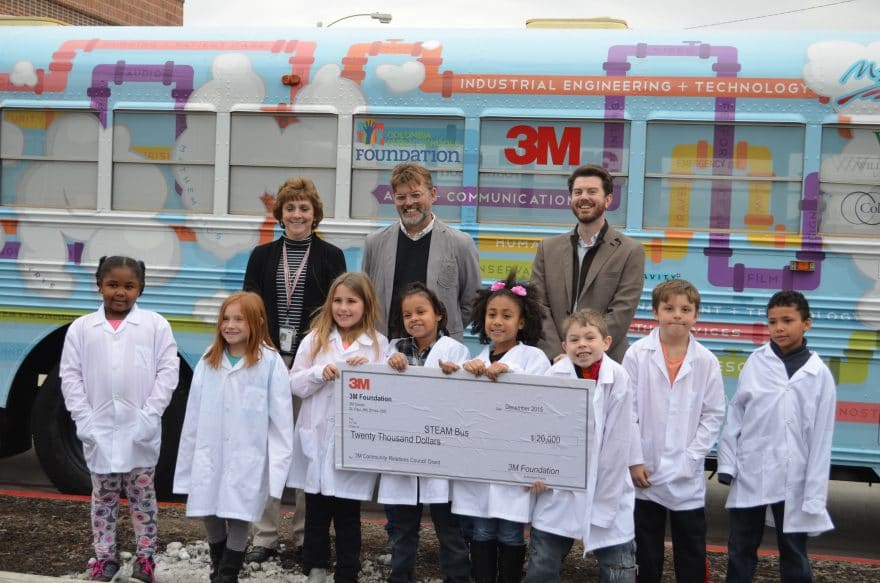 And when CPS was required to build a communications tower at a new high school to ensure high-level first responder communication in the event of an emergency, CPS offered to share that tower with Full Stream Wireless. In exchange, Full Stream agreed to provide free wireless internet to the school’s students.

These are the kinds of partnerships that have allowed CPS, located almost directly between Kansas City and St. Louis, Missouri, to bring technology initiatives to its 18,000 students. Neither of these initiatives would have been possible without strong community and vendor relationships, says Chris Diggs, director of technology services at CPS.

The STEAM Bus is a technology lab on wheels. The whimsically painted school bus has been compared to The Magic School Bus—a book and television series in which kids climb into a magic school bus and are swept away on out-of-this-world educational adventures. That’s an appropriate comparison for the STEAM Bus, which brings novel ideas, projects and opportunities directly to CPS students. STEAM stands for science, technology, engineering, art and math.

Rather than bring a limited number of students on a small number of field trips, STEAM Bus brings the field trips to the kids, and as a result, it can reach a much larger audience at lower cost.

Perhaps just as impressive as the STEAM Bus concept is that it was fully funded with zero impact to the CPS budget. That’s thanks to strong relationships CPS has built with community members and technology vendors who funded it. Even the bus was donated by the district’s transportation provider, Student Transportation Inc.

The same drive to increase technology access that fuels the STEAM Bus led to a unique wireless initiative at a CPS high school.

Through its “personalized learning initiative,” CPS provides students in grades five through eight and in its high schools with iPads. The goal is to give them better access to resources.

That only works, though, if students can connect to the internet, so when CPS was required to build a communications tower at its new high school, it jumped at the opportunity to partner with a local internet provider, Full Stream Wireless. Under the agreement, CPS arranged a partnership to lease space on the tower to Full Stream at no monthly cost. In return Full Stream provides high school students with free wireless internet modems that they can take home with them. That internet is routed back through the school district’s network, so the school is still able to filter access.

“More of our students have internet access at home than we thought, but we have really made a conversion to more digital resources, so we feel we have an obligation [to provide internet access], even if it’s just a few students, we want to make sure they can get the same resources,” Diggs says.

“When we make sure that everyone in the high schools has access, we will expand to other schools,” Diggs says.

Programs like the 1:1 personalized learning initiative—which sends each student home with their own device—Full Stream Wireless partnership and the STEAM Bus are made possible by the tech savvy culture of CPS and a strong technology services department, Diggs says.

Events like the district’s annual Technopalooza, a conference “by teachers, for teachers” point to this forward-thinking atmosphere. Technopalooza attracts hundreds of attendees and includes sessions like “3D Printing to Enhance Instruction” and “Tales of the 6th Grade iPad Guy.”

“We have adventurous teachers and an excellent teaching staff that are open to using technology in their classrooms,” Diggs says.

This fall CPS hosted a World Café themed “Teaching and Learning in Today’s World.” That event created a community dialogue centered around what skills, especially regarding technology, students need in order to succeed and what area employers seek in their employees.

Behind the scenes, the technology services department coordinates all of the district’s tech initiatives, which are made possible by their robust infrastructure and up-to-date network equipment. The district effectively uses software tools such as their student information system, learning management system and mass communication system to keep their parents and Columbia community informed.

“We have adventurous teachers and an excellent teaching staff that are open to using technology in their classrooms,” Diggs says.

Most importantly, she says, their superintendent strongly supports the district’s technology-based programs and sees the positive role technology can play in enhancing instructional practices.