A district of piloting: Corona-Norco tests tech initiatives with teachers and students

When it comes to IT, Corona-Norco United School District (CNUSD) is a district of pilots. That’s not a reference to flying; it describes the small-scale, short-term projects that CNUSD experiments with before launching districtwide initiatives.

In fall 2016, CNUSD completed its latest pilot program when it launched its MyCNUSD portal. Designed to create personalized user experiences for teachers, counselors, staff and students, the portal project was made possible through a close partnership with Microsoft. 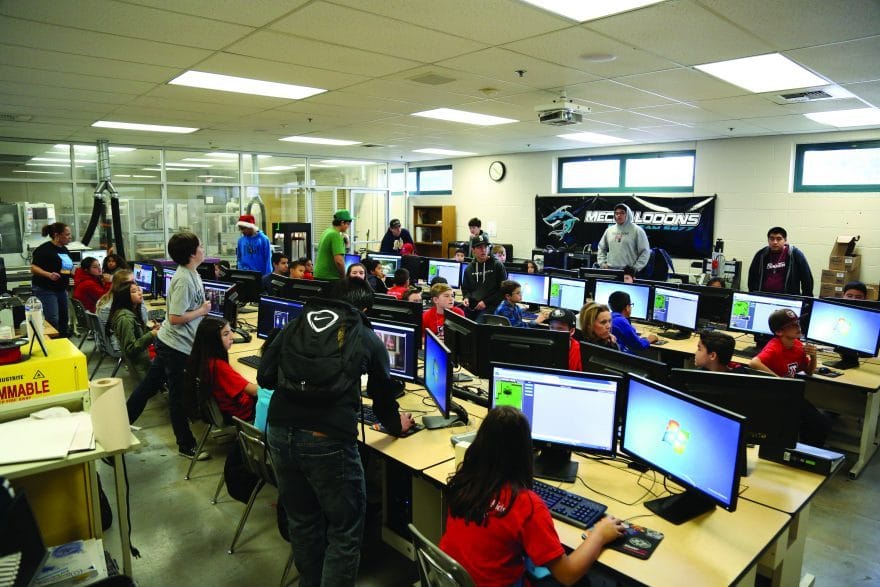 The forward-thinking and grass-roots approach that CNUSD—a district of 53,000 students and 50 schools in Riverside County, California—uses to pilot programs like this has helped the district stand out as a leader in urban education and helped bring innovative programs to all of its diverse stakeholders.

In 2012 and 2013, the district was a Broad Prize for Urban Education finalist. In addition to earning $125,000 both years for scholarships to its graduating seniors, the district was able to connect with other education forerunners, like the Miami-Dade School District (MDSD), which was developing customized online systems, like online portals, in partnership with Microsoft.

CNUSD drew inspiration from the Miami district and decided to move away from its websites and also partner with Microsoft to have an online portal that it could customize for each ‘user’—in this case, students, teachers, counselors and other staff.

CNUSD worked with Microsoft on the portal for two years and soft-launched it in fall 2015. In 2017, the district will roll out customized dashboards within the portal for each user group.

“Basically the intent is that you start the school day, whether you’re a staff member, a student or a parent, by logging in to MyCNUSD and then have all the information you need in one place at one time,” says Evita Tapia-Gonzalez, Director of Communications at CNUSD.

For teachers, the dashboards streamline their days by allowing them to sign into one account instead of accessing all of their applications, like Discovery Education, and email or learning management systems, separately.

For counselors, the dashboards within MyCNUSD will offer a more comprehensive picture of each student because all the students now have a profile that shows their course history, tracks graduation requirements and keeps a record of truancy or behavior issues. Before, that data was piecemeal.

As it does with many of its IT programs, CNUSD developed its portal and each of the customized dashboards through what Tapia calls “intense committee work.”

“One of the things that our district prides ourselves in is our transparency,” she says. “We allow for and we solicit end-user feedback, whether we’re trying to gather more information for how we should try to open a parent center or how we’re delivering a tool for teachers.”

The district regularly turns to its IT steering committee, IT advisory committee and educational technology committee for feedback as it develops programs like this, and in the case of MyCNUSD, Microsoft played a vital support role as well.

“They were sort of like the fly on the wall during all of our intense committee work, and as they were hearing from the end user, they were building the product for us,” Tapia says.

After initial planning and feedback, the district tested the portal and customized dashboards with three of its schools—one high schools, one middle schools and one elementary school. The district hired a portal specialist who spent time at those pilot sites to provide trainings, speak at staff meetings and “empower staff to jump all-in and play.”

CNUSD wanted to create a safe zone at each of the pilot schools so that staff felt free to experiment with the portal and its forthcoming dashboards..

“We encouraged them and solicited them to give us feedback as the user, so that when we deployed it to all of our 50 schools, we’d taken the perspective of the end user and modified the product so it made sense for all school stakeholders,” Tapia says.

By getting stakeholders involved early on through committee work and piloting, the district turned skeptics into advocates. Through the pilot process, the first users become “site champions,” who peers can turn to for support when they begin using the program.

“It allows them to feel a part of the process, which is helpful on the communications side because they’re part of creating a tool for their peers to use. They’re part of the input and the modification, and then they become endorsers,” Tapia says.

This isn’t CNUSD’s first piloting experience. The district has piloted some of its most successful programs, including Passport to Success, which awards students badges for things like extracurricular participation, attending school events and completing graduation requirements. Those badges can be turned in for gift cards, donated goods or privileges like jumping in front of the lunch line.

And this isn’t the first time the district has worked with a major tech player like Microsoft. For the past few years, CNUSD has partnered with Cisco to offer a certification program that allows students to be IT technicians at one of the district’s high schools.

Going forward, the district has plans to expand the dashboards in order to pursue more data-informed decision making tools, and it hopes to continue working with tech partners like Microsoft and Cisco.