Once a cadet, now Polk is the city’s first CIO

In 2016, the Obama administration invited cities across the U.S. to participate in the Police Data Initiative, a program designed to bring together governments that exemplify transparency in law enforcement. One of those cities was Rancho Cucamonga, California, a midsized bedroom and industrial community nestled in the foothills of the San Gabriel Mountains.

For the past year, Rancho Cucamonga has posted key information concerning public safety to an online dashboard. Residents can now view the average response time for emergency vehicles or the total number of reported crimes and traffic collisions. They can even filter data to see crimes by location or type. 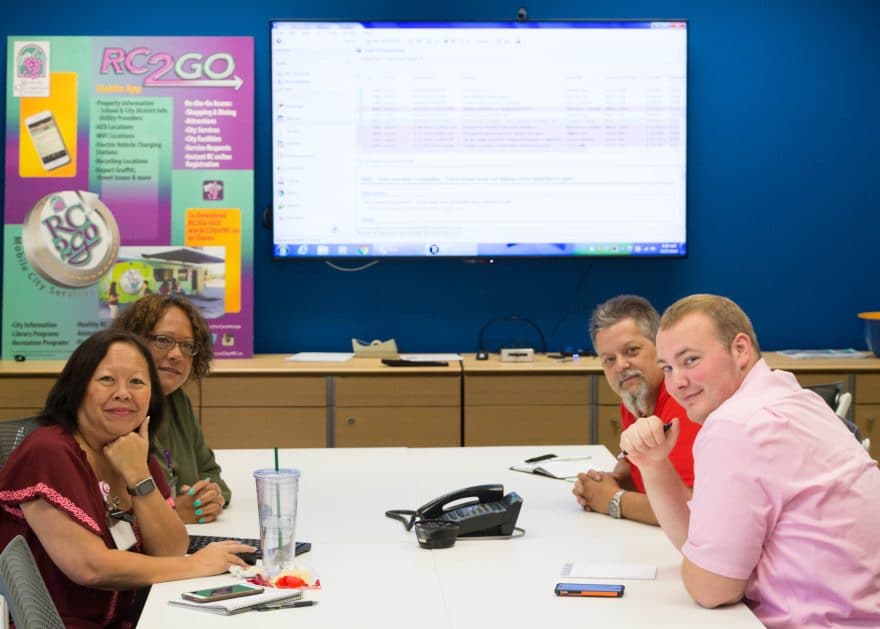 It could be alarming to some, Darryl Polk, chief innovation officer for Rancho Cucamonga, hopes it inspires confidence.

“That’s the spirit of open data; it allows people to get ahold of the raw data and really make concrete conclusions about what is happening in their community,” says Polk.

Changing role of IT

Allowing public access to this information, some of which is public anyway, but difficult to get, is just one way technology is changing the face of local government. “For decades, the role of IT was just handling spot fires,” says Polk, such as solving computer glitches or helping provide internet and email.

The past five to 10 years, Polk says that role has expanded as more government services transition online. While basic IT services still include maintaining the infrastructure of the network and keeping servers and data centers running, today one of the largest responsibilities of IT departments is recognizing ways department services could be improved through technology.

Often, the impacts are surprisingly simple. Polk recently met with the Rancho Cucamonga Animal Care & Adoption Center to find ways to reduce the number of walk-in services for dog licensing, pet adoption and vaccination. He has also worked with human resources, to streamline the hiring process, and with the fire department to use drones to search for lost hikers.

The result of providing these types of services is IT departments have become the new face of local government, says Polk.

“When a developer submits an online application for a building permit and it doesn’t go through, it’s no longer the department of building and safety’s fault, it’s the IT department’s fault,” he says.

For Polk, it’s not just a welcomed challenge: it’s a huge improvement. “City hall is not a 24/7 operation. If you work an eight-to-five job you can’t just turn in an application on Saturday,” he says. Now people can access government services through web-based platform at any time, making local government accessible around the clock.

“And the sweet spot on that is its not completely replacing personal contact, but it makes the personal contact so much better because we’re reducing the volume,” says Polk. “For people who don’t need or want to come in to City Hall, they can take care of what they need online. This means people who do need or want to come in meet with staff that has more time to walk them through the process and provide a better level of service.”

As CIO, Polk makes sure all these developing systems stay on track. “My job is kind of a facilitator of all these different elements that we hope creates a great customer experience for our community,” he says.

Connecting technology and public service has always been a part of Polk’s career.

At 19, Polk worked as a police cadet in Ontario, California, a neighboring city of Rancho Cucamonga. After a few years as a cadet he was offered a position in dispatch, where he discovered the importance of technology in law enforcement.

Polk had always been interested in computers and, at the time, dispatch had just transitioned from pen-and-paper logs to a computerized system.

His understanding of technology and his willingness to accommodate all levels of users allowed Polk to rise through the ranks, eventually landing him the position of police administrative director in 2011. A few years later, the City of Rancho Cucamonga was looking for someone to oversee its newly created department of innovation and technology, or DoIT. Polk was impressed that Rancho Cucamonga was breaking new ground with its ambitious use of technology.

But “the biggest attraction of the job for me was that I had lived in Rancho Cucamonga all my adult life and I really like the idea of seeing the impacts of what I do in my community,” says Polk. He applied for the job and in January 2016 became the city’s first CIO.

“My time with the police department helped me understand the difference between a problem and a crisis, which helps me focus on the big picture when dealing with incremental issues.”

While Polk describes the new job as “a big paradigm shift” for him, he says his background in law enforcement has helped.

“My time with the police department helped me understand the difference between a problem and a crisis, which helps me focus on the big picture when dealing with incremental issues,” says Polk.

For instance, on a given day both the fire department and the parks and recreation department could be experiencing a technical issue. It is up to the IT department to make sure both problems are fixed accordingly so everyone can get back to work.

“A big part of the job has been establishing relationships and understanding how different departments define their priorities so we can best serve all our partners in the city,” he says.

Polk also appreciates the unique relationship Rancho Cucamonga has with the community at large.

“Rancho Cucamonga’s local government shares a lot of trust with our community that has been built from continued community engagement,” says Polk. This is one of the reasons releasing open data on public safety was not considered a controversial move.

“It wasn’t spurred by community activism. It was an evolutionary move to continue engaging our residents in decision making and to keep solidifying our relationship,” he says.

And for Polk, public safety is only the beginning. “Our ambition is to take as much of our city performance metrics and open data online as we can,” he says. This includes the information from the city’s finance, development, public works and engineering departments.

“Because the more we can do, the more engaged the community is, and ultimately the better the relationship.”