In the heart of the nation’s capital, American University (AU) has been in operation for more than 123 years. Today, AU has more than 14,000 students and is continuously recognized for its balance of class time and career-advancing experience in Washington, D.C., with more than 89 percent of students participating in outside internships in a broad range of studies. “Our rankings keep going up every year, which is a sign of the great progress here at AU,” says David Swartz, vice president and chief information officer. “Our acceptance rates are 25 percent, down from 45 percent just a few years ago; an indication of the desire of people to make AU their first choice.” 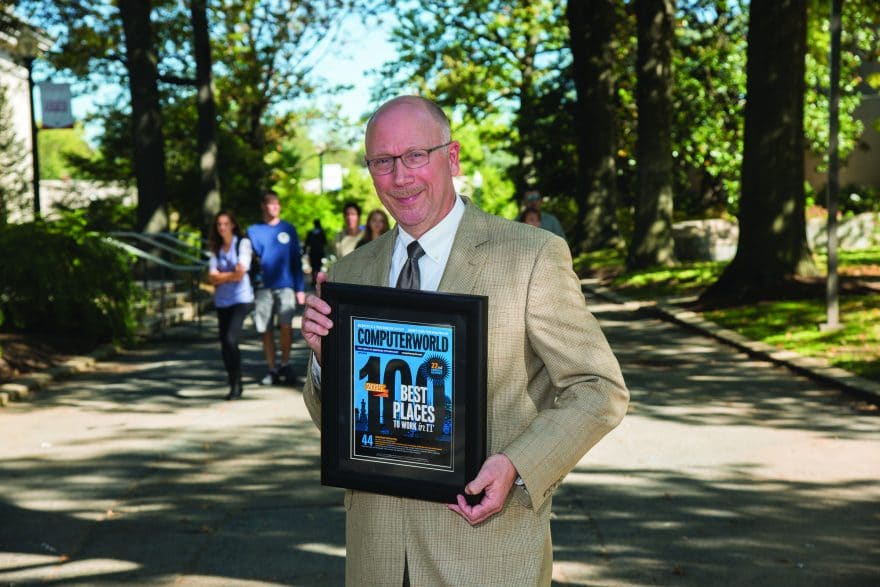 As a first-choice school for many students looking to Washington, D.C., for higher education, AU faculty and staff have been tasked with the challenge of making sure the school stays up to speed in terms of the latest in modern classroom technologies and infrastructure. As of late, the focus has been on reinventing the student experience. “Our focus is on providing value in students’ educational investment and ensuring this investment yields a positive outcome. We’re becoming more student-centered,” says Swartz, who has been CIO at AU for over eight years.

This commitment is seen in AU’s recent partnerships with major tech brands such as Sony and Verizon, paving the way for classrooms of the future, more 4G LTE network coverage and greater bandwidth campuswide. A new East Campus construction project along with other projects will expand AU’s usable space by a third with new facilities targeted at technology and innovation.

Swartz has a long tenure in the higher ed technology space and has helped direct many of AU’s recent initiatives by leveraging this experience. “I have my Ph.D. in resource economics from the University of Maryland – College Park,” he says. “I started out in this field as a research faculty member and eventually became head of research computing.”

Bringing a diverse background to the table

These experiences led Swartz to George Washington University (GWU), where he served as CIO from 1999 to 2007. “Overall, I’ve been in a CIO role for more than 17 years,” says Swartz. “I’ve spent a few years working outside of higher ed in health care and telemedicine and this was a good way to bring best practices back to education.”

Tired of constant travel and hours on the road away from his family, Swartz came back to the higher-ed tech space and has been involved in leading projects, academia and research. “My friend and colleague Dave Lambert was working at Georgetown back when I was at GWU and we worked on Internet2 research and collaboration with some of the top 100 universities in the country,” he says. “We also worked on the Mid-Atlantic Crossroads (MAX), a system that ties all universities in the region together into Internet2. Since then, this has blossomed and includes many more universities.”

Swartz has also been an active member of EDUCAUSE, a global organization whose mission is to advance higher education by promoting the intelligent use of IT. Swartz was named IT Leader of the Year by EDUCAUSE in 2012.

Today, he supports some 200 professionals working in AU’s extensive IT departments. AU implements many of the same institutional IT programs other universities do, such as Blackboard — which two AU alums actually created — but the school is also rolling out new partnerships with big names in the tech industry.

Swartz’ experience and oversight has been crucial as AU joins new partnerships with Sony and Verizon and embarks on a campus expansion project to ramp up state-of-the-art classroom and laboratory space for several departments from the College of Arts and Sciences and other schools.

Hands-on experience with tools of the trade

AU’s School of Communications has developed a new Media Innovation Lab (MIL), outfitted with Sony high-definition broadcast and production equipment, including 4K and business projectors, studio cameras and production switchers. “We wanted to build a facility that could benefit from the depth of knowledge, research and development that Sony has to offer,” says Swartz.

The new Sony classrooms are part of the School of Communication’s recent upgrade, consolidating operations for six spaces into the newly restored McKinley Buildings. AU’s use of Sony technology demonstrates how new A/V technology can fit in all forms of instruction, from general lectures to live event production, interactive classrooms to research, video production and even video surveillance.

“These classrooms will become the model for hundreds more that we’ll be rolling out across the entire campus,” adds Swartz.

To ensure that AU has enough capacity to keep up with the demands of the School of Communications and many other programs the university offers, it has partnered with Verizon to install a 4G LTE network across campus in about 75 buildings and spaces. “In the mobile-first world that is today, the demand on campus bandwidth is insatiable,” says Swartz. “The goal is to be the most wireless university; we want our students, staff and faculty to have access to tons of bandwidth so they can accomplish whatever they need to.”

Not only is AU renovating existing classrooms to bring them up to future standards, the university is also building brand-new facilities to further its mission of reinventing the student experience.

Once a large parking lot, the East Campus project is located directly across the street from AU’s main campus. Upon completion, East Campus will consist of three new residence halls and two academic and administrative buildings, as well as a small fitness center and retail outlet.

One of the most exciting components of this project is the Don Myers Technology and Innovation Building, offering new classroom and laboratory space. The building commemorates Donald L. Myers, who served as chief financial officer, vice president and treasurer for 32 years and was a strong supporter of technology. He died Jan. 6, 2014, after a long struggle with cancer at the age of 68. The East Campus project is set to open in fall 2016.

In his role as CIO and vice president, Swartz says many of his duties range far beyond IT programs and oversight. “I also am involved with risk-management projects and work to understand our business process and the needs of all areas of AU and how to support each college and department. A successful system is much more than technology, its people and process,” he says.

Swartz says understanding people, process and vision in terms of the bigger picture at AU is a very important aspect of his job. “In order to successfully deploy any technology, you need to focus on best practices, as well as people, and understanding if it is something they know how to use and can get the full value from,” he explains.

Fortunately, Swartz says he is very lucky to work in a collaborative environment. “We have shared goals — we want to reinvent the student experience and offer the most value in the investment that is higher education,” he says.

With more hands-on classroom technology and new facilities dedicated to innovation, American University, David Swartz and the IT team are making sure the return on investment is real and attainable for all graduates. 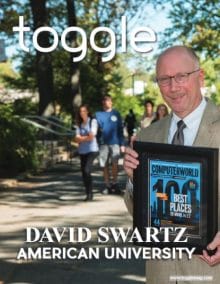