When he was a young project manager working for a multinational company, Derek Kruse asked an executive to give him some career advice.

What he was told: “Make yourself obsolete.”

Kruse found the notion a little silly at the time, but it’s one that he now wholeheartedly embraces. It’s a concept often referred to as “servant leadership,” a term coined by Robert K. Greenleaf in 1970 that bucks the idea of traditional leadership—accumulating and exercising power—by emphasizing sharing leadership, putting the needs of others first, and helping people achieve their highest success. 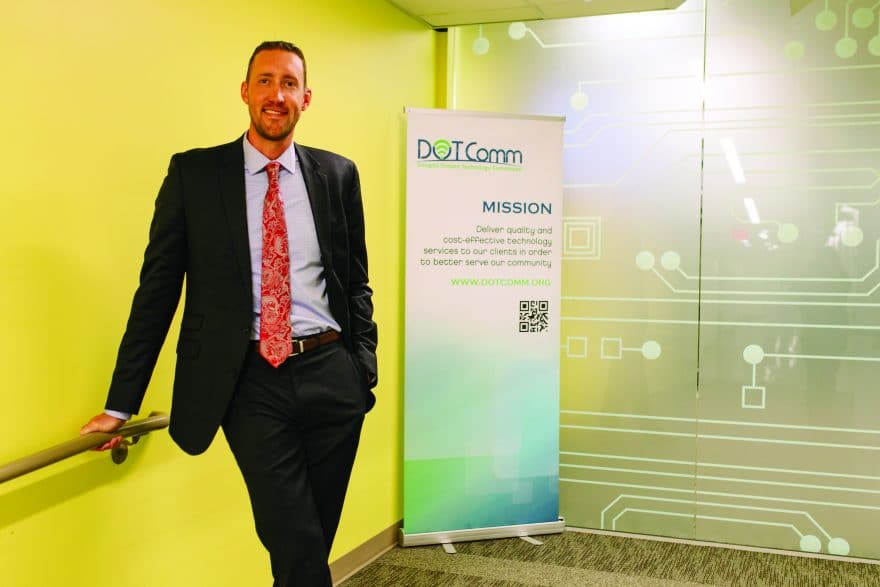 “It’s not about me, it’s not about the person who sits in this chair—if everything has to run through me, then there’s a problem,” he says. “I strive to be a person who makes other people’s lives easier and more productive.”

Kruse brings that philosophy to his role as chief information officer of the Douglas-Omaha Technology Commission, or DOTComm, an agency that serves the technology needs of many city and county departments throughout Douglas County and in the city of Omaha, Nebraska.

The commission was created in the early 2000s as a means to restructure and consolidate what were initially two diverse technology organizations in the county and the city, the goal being to provide better, more cost-effective technology services for more than 70 governmental entities and roughly 5,000 employees.

Kruse, who has nearly 15 years of experience in the private sector, most notably working in a variety of positions in IBM’s real estate division, was recruited as DOTComm’s CIO in 2012.

Working from the inside-out

When Kruse joined the organization, his first order of business was to assess the agency itself, which had just been restructured with a new governance model prior to his arrival. That included instituting service level agreements to create greater accountability in the organization and between vendors, analyzing how quickly service tickets were dealt with and resolved, and performing surveys of end users. As Kruse explains, this enabled the agency to have real, aggregated data on itself.

“When you speak anecdotally, you can get in trouble,” he says. “You can tell me you hate DOTComm, you can tell me you love DOTComm, but can you show me any data why? By focusing doggedly on the data, we now get to talk about how to change behaviors, as opposed to talking about feelings.”

In collecting that information, DOTComm has been able to streamline and improve services and set goals. The organization continually measures its performance and regularly publishes its results. In 2015, for instance, it dealt with 51,753 service desk inquiries, opened 27,285 tickets and closed 26,940 tickets. Published metrics showed that 96 percent of tickets were resolved within the target time frame, and in surveys, 95 percent of respondents reported being very satisfied.

That’s quite a change from just a few years ago, according to Deb Sander, who serves as chair of the DOTComm oversight committee.

Over the past four years, during Kruse’s tenure, DOTComm has upgraded all major locations in Douglas County and Omaha to fiber-optic internet, which greatly improved speeds and bandwidth.

She has worked for the city for 26 years, and joined the DOTComm board two years before the reorganization. At that time, she recalls, there was “a lot of dissatisfaction with IT support and IT services.”

And the organization, for its part, took some time getting off the ground, she says: There wasn’t much of a plan, leadership or direction. But that has changed since Kruse took the helm.

“He’s provided meaningful leadership,” says Sander. “His approach is very collaborative. He’s always forward-looking, forward-thinking, asking the question, ‘How do we make the most of the money we have?’”

Over the past four years, during Kruse’s tenure, DOTComm has upgraded all major locations in Douglas County and Omaha to fiber-optic internet, which greatly improved speeds and bandwidth, making for “easier and more productive work lives,” Kruse says.

DOTComm has also migrated applications and web sites to the cloud (including Salesforce, Google Apps and Amazon Web Services), which has enabled more reliable, secure and stable working environments. They have updated the city’s Oracle business management software, implemented a modern telephone system, and installed a managed print program for more cost effective and reliable printing.

As Kruse stresses, it ultimately comes down to constantly exploring cost-effective ways that technology can make lives better.

“We’re facing fun, interesting challenges today, as opposed to the bang-your-head-against-the-wall challenges we were dealing with a few years ago,” he says. “It’s a collective movement toward progress as opposed to pointing fingers and being frustrated. There are tremendously talented people in Douglas County and in Omaha and now we are partnering with them. We’ve moved beyond putting out fires to solving important problems.”

That feeling is shared throughout the organization.

Vijay Badal, DOTComm’s director of application services, recalls joining the organization three-and-a-half-years ago and finding “ancient” infrastructure that was “way behind” on maintenance, inconsistent throughout departments, and highly vulnerable to malware.

The migration and implementation of Salesforce, Amazon and Oracle for more applications throughout the city and county is, and will continue to be, a fulfilling challenge, he says.

“We want to leverage these technologies to the max,” says Badal. “I’m really excited—there are a lot of projects to work on.”

While it may seem drastic to move from a global private sector corporation with hundreds of thousands of employees to a public agency with not even 100, Kruse says he sees more similarities than differences.

At DOTComm, “there’s a need to justify, a need to prove out that the decisions we’re making are in the best interest of the city and county,” he says.

That’s similar to the private sector, where decisions also need to be justified—except the primary concern is stakeholders, not taxpayers or government employees. He notes that it’s easy to get “insulated” in the corporate world because so much is kept under wraps, whereas when working with government, it’s all public, and you have to stand up out in the open, in a room full of constituents, and argue your case—a concept that he calls “challenging and refreshing.”

Still, he says he is “very grateful” for the time he spent in the private sector. Particularly at IBM, he “jumped around” in a variety of jobs, which he says is “the greatest gift they gave me,” and which also helped to prepare him for his current role at DOTComm, for which he juggles multiple responsibilities, aims to achieve a diverse set of goals, and works to create compromises that satisfy parties with varying sensibilities.

Making the transition to DOTComm came at a point in his life when he was looking to pursue new opportunities.

“Every couple of years I say to myself ‘what’s the next challenge’,” he says. And four years ago, that question had become: What could he do to positively impact his local community?

“I wanted to utilize the skill set that I have, and make a difference in the community,” he says.

And he has. At DOTComm, in his charity work for the Cystic Fibrosis Foundation, working with the United Way, and in seminars he offers throughout the region, he stresses the concept of “servant leadership.” 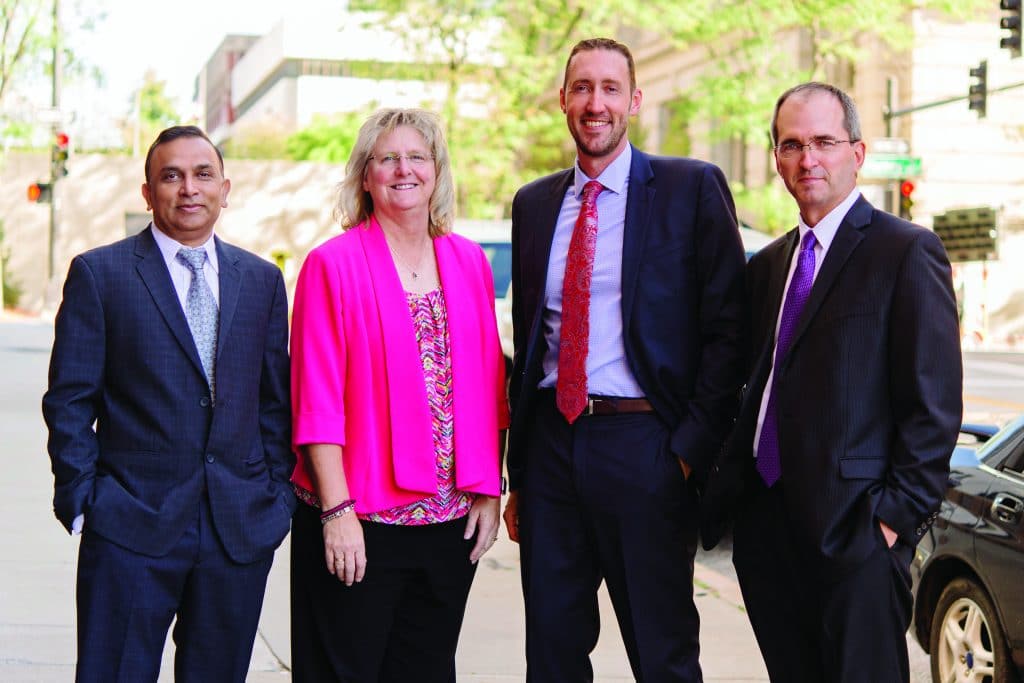 Leading is about enabling everyone to have a voice, directing by example, and promoting teamwork, he says—not lording over them or being indispensable. He practices that by freely sharing knowledge, encouraging his team to be collaborative and also sharing their ideas, and ultimately creating a sense of family.

It’s a philosophy that hasn’t gone unnoticed. The Nebraska non-profit AIM—which strives to foster the state’s tech ecosystem—named Kruse “Tech Leader of the Year” in 2016. The organization gives the award to executive-level leaders who provide “effective, efficient, high-quality service” to external and internal clients, and also serves as an inspiration to others in the tech community, according to its website.

“You’ve got to be someone who helps other people,” says Kruse. “You want to give your knowledge away, make other people empowered to do their jobs and genuinely own their ultimate success.”