Head of the academic IT class

It sounded like a battlefield promotion for Greg Limperis when the role of interim principal at the Hampton, N.H., middle school was added to his primary responsibility as the district’s director of educational technology.

How long that interim would be, Limperis couldn’t say, but when speaking to Toggle in late August, he was hoping his tenure as overall boss of Hampton Academy would be short. There’s already a lot on his agenda as he goes about making School Administrative Unit 90 among the leaders in leveraging technology for student and faculty success. 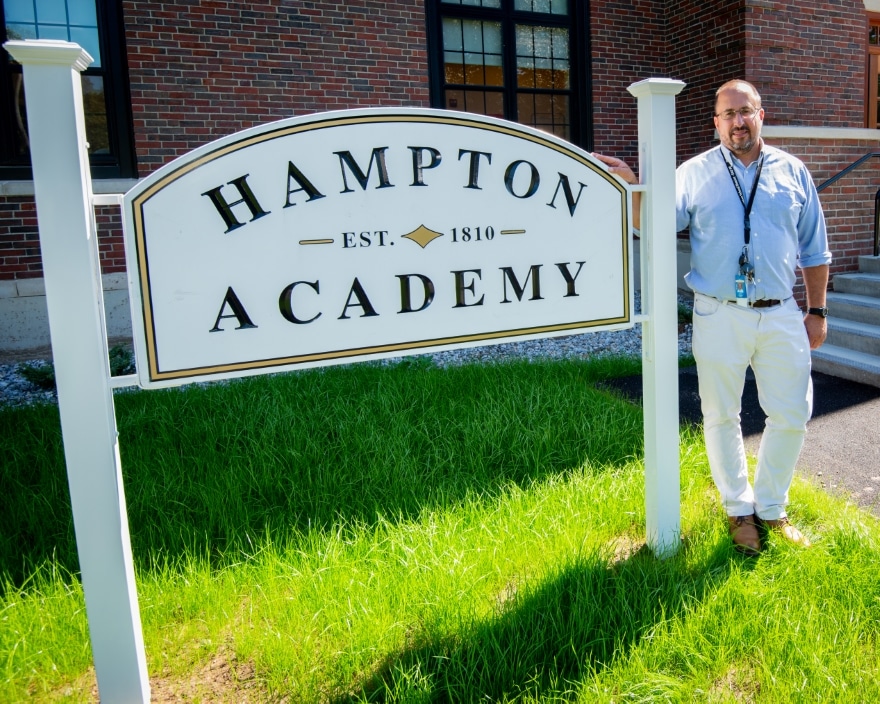 “I’m not sleeping anymore,” he says with a laugh while hustling back to his home in Derry 45 minutes away so he could watch his 13-year-old son play Pop Warner football. “Sometimes the weight of the world gets tossed on your shoulders, but you still get everything done. It could be two weeks or two months, but I love the superintendent [Kathleen Murphy] and won’t let her down.”

Limperis says Murphy shares his vision for a progressive infotech strategy at the district that serves around 1,100 children from pre-kindergarten to junior high in three schools.

Plans for the new academic year are both incremental and ambitious. Servers have been virtualized, new apps include one that locates all the children aboard a bus, and the student-run and award-winning Hampton Academy TV station airs live on Mondays. A new drone program also offers a fully immersive STEM experience that might be all the inspiration some youngsters need to pursue a career in technology. 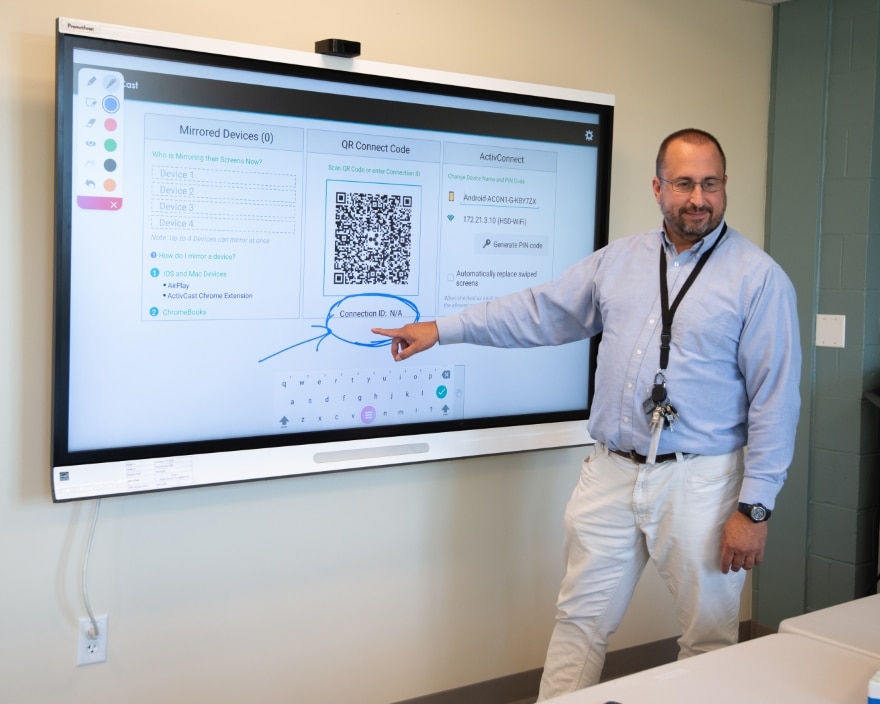 Lots of preliminary steps are already in place, and in a cost-effective manner to boot. Around the time when Limperis came aboard, SAU 90 was committed to having one modern device per pupil but was leaning toward iPads. He knew of another tool that offered more bang for the taxpayers’ bucks.

“I could get two or three Chromebooks, case and keyboard for the $400 cost of one iPad, and the kids just loved them,” Limperis says. “It was a wise investment, along with laptops for teachers.”

A student-parent Chromebook use agreement has since been put in place for grades 3 through 8, with no fee, but the family is liable if the device is stolen or damaged. All activity on the Chromebook, whether at school or offsite, is subject to search by district staffers. Impressed with Chromebook’s results, the district will supply them to the Centre School, which serves kids from pre-K to third grade.

His line in the sand

SAU 90 has also benefited from two new websites launched under Limperis—the implementation of a data-secure Student Information System, and report cards being posted online. Each classroom has either a projector or large interactive panel and each child has access to robotics and 3D printing.

“I’m an educator with a vision,” Limperis says. “The question is, ‘How do we make this more engaging? How do we capture a student’s attention and harness their creativity?’”

He and a few aides seem to have captured the attention of children, teachers and the school board alike with their built-on-premises Augmented Reality Sandtable that Limperis likens to something one might see at the Boston Museum of Science. The brainchild of the Army Research Laboratory, such a high-tech sandtable was first used to create a 3D battlefield map.

But there’s no limit to the tool’s peaceful and educational purposes, Limperis says, explaining how a projector displays a topographical map atop the sand, the colors changing as piles are made and the lowest levels often blue to depict water. Should a hand be placed between projector and sand, it appears as a cloud.

The sandtable might best illustrate the consequences of global warming and rising sea levels. Limperis says those are very legitimate concerns on the homefront, the low-lying town of Hampton subject to coastal flooding, especially during winter storms.

Rising test scores in the district attest to the value of its IT investment, Limperis believes, again citing the commitment of Superintendent Murphy.

“It doesn’t do any good to give technology to people who don’t know how to use it,” he says. “She’s seen to it that the staffers do, and we’ve got teachers and students engaging with each other on a level previously unseen.” 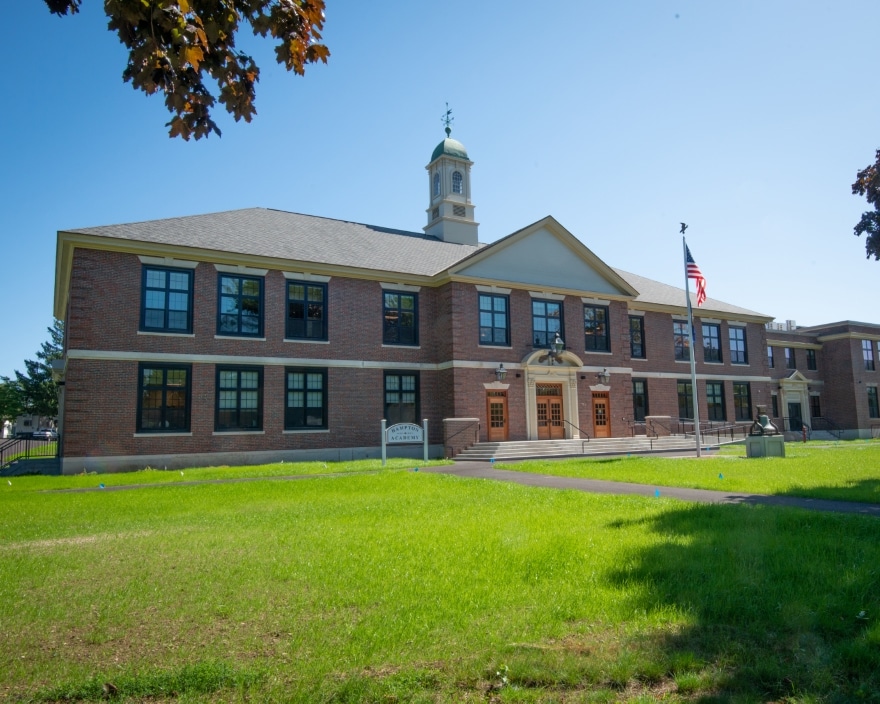 And while school districts are engaged in healthy competition, Limperis eagerly shares his strategies with anybody who will listen to him or read the blogs he’s written for the online EdTech Digest. He takes a farsighted approach to his profession and part of that might stem from an unconventional background that includes credentials in non-technical fields and a lot of on-the-job learning.

A criminal justice student at the University of Massachusetts-Lowell, Limperis would earn a master’s with emphasis in urban education from Boston College in 1996. His BC years coincided with work as an interpretative ranger for the National Park Service’s installations in the Bay State.

He’d go on to serve in multiple positions in the public and private sectors, including a long stretch with the troubled Lawrence school district before the state of Massachusetts took it over in 2012.

“I knew what that meant,” he says. “The superintendent was going to make changes and Hampton had an opening. A perfect storm.”

A perfect storm in the best of ways. Six years later, it’s still in progress, with progressive changes blowing in from all directions.

Including from the position of chief administrator at Hampton Academy, though Limperis will be glad when that issue has been resolved. After all, he’s got plenty to be consumed with on the IT front alone.