When Jacques Monica left IBM to work in education in 1993, he understood what he was leaving behind. As a systems engineer, he had a stable future developing online catalogs and video content for businesses with the possibility of a six-figure salary. But Monica was looking for more.

“I left IBM and a good paying future, because I wanted to help kids and teachers,” he says. 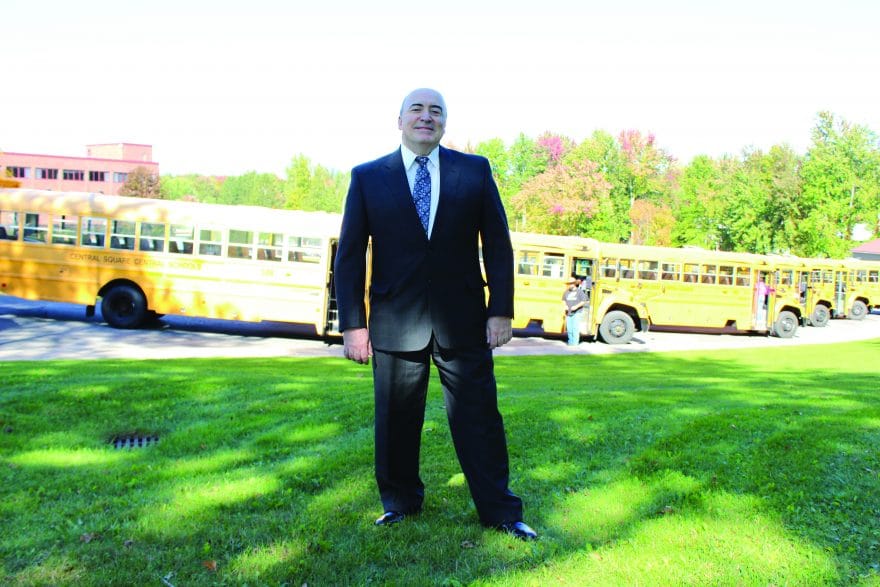 So, he accepted a position as a project manager for the Central New York Regional Information Center (CYNRIC). There, he created a department that taught teachers how to integrate technology into the classroom during a time when computers and other devices were just making their way into schools.

Monica stayed in the role for five years until 1998, when he applied for the position of Central Square School District’s first IT director and got it.

When Monica started as the IT director, the Central Square School District had an annual budget of $1.2 million. Monica was excited to build the department in a relatively well-funded environment.

“I left IBM and a good paying future, because I wanted to help kids and teachers,” he says.

During this time, Monica also co-founded an organization called the Central New York Directors of Technology (CNYDOT), which brought together IT directors from around central New York to share experiences and solutions and align district technology initiatives.

But just four years into the position at Central Square, the annual budget was slashed to $50,000, hardly enough to support the needs of 5,000 students in eight buildings or find a solution to thousands of aging PC’s and 30 servers.

“The challenge was trying to make people understand how far we were falling behind because of this miniscule budget. No one argued that technology wasn’t important to them. After all, they wanted the best for the children, but where was the money going to come from now that it was no longer in the budget?” says Monica.

Monica is proud of the ways he was able to provide students with the technology they needed despite the tiny budget.

During that time, Monica forged relationships with parents from the community and approached the businesses and organizations where they worked for donations of their retired desktops.

“At that point, the average age of the districts technology had gone from five years, to 12 years … So four years old PCs, heck, that was brand new,” says Monica.

“In this way, I was able to continue to get newer technology into my district with a minimal budget,” says Monica.

Currently, with seven school buildings, Central Square School District is the largest district in Oswego County, New York. The district also encompasses one of the largest geographic areas in the entire state with some children having to travel over an hour to attend school.

As director of information services, Monica is the primary contact for all things technology-related. His department supports numerous forms of technology in the classroom, such as the 100 AP Wi-Fi network, the district-wide video surveillance system and several other technology systems. He is also responsible for maintaining software that analyzes students’ reading levels and several databases for human resources, libraries and food services.

“Most people who work in IT in business think IT in education is very basic like just running Microsoft Office for spreadsheets and term papers. But there’s a whole lot more involved than they realize,” Monica says.

In fact, he says there are lots of similarities between the IT of education and the IT of business.

“We all have networks, we all have to manage people and accounts, and we have the same security problems. Actually we probably have more security issues because we have what I like to call our ‘student hackers’, who want to see if they can crack the network. In the end, we have a lot of the same issues as business, but we also have greater personnel and financial constraints,” Monica says.

Today, Monica is happy to report that technology is becoming a priority for the school district once again.

“I’m fortunate that we now have a school board that has members who are IT people in the business world,” says Monica. These are network administrators and computer consultants, and people who use technology every day in their business lives, and believe their children should have access to it at school too.

Beginning this year, the Central Square School District will also be awarded $4.1 million as part of the Smart Schools Bond Act. This state-funded act distributed millions of dollars across the state in order to fund educational initiatives that increase network bandwidth capacity.

According to Monica, this was the first state funding his district had received for instructional technology in decades.

“Before I retire I would like to see a world where state governments fund their education better and that they realize that the rural local economies can’t support them on their own,” Monica says.

“So if we, as a society, want a better educated child, [these governments] have to take responsibility to equitably finance education, and quit blaming the people who have dedicated their lives to helping children learn,” he adds. “Do away with the red tape and political agendas, make children your priority, your future prosperity.”