Peekskill City School District has enhanced its classrooms with new technology, despite limited funding for tech

Inside Peekskill City School District (PCSD) classrooms, students and teachers are embracing a new way of teaching and learning thanks to their eagerness to try new technology.

As a small city school district whose student population is growing, PCSD has had to get creative in order to provide more technology with limited funding. To help ensure their students receive the same level of education as their suburban counterparts, PCSD is implementing Google Apps for Education and shared equipment to provide the best opportunities while minimalizing the cost to the district. 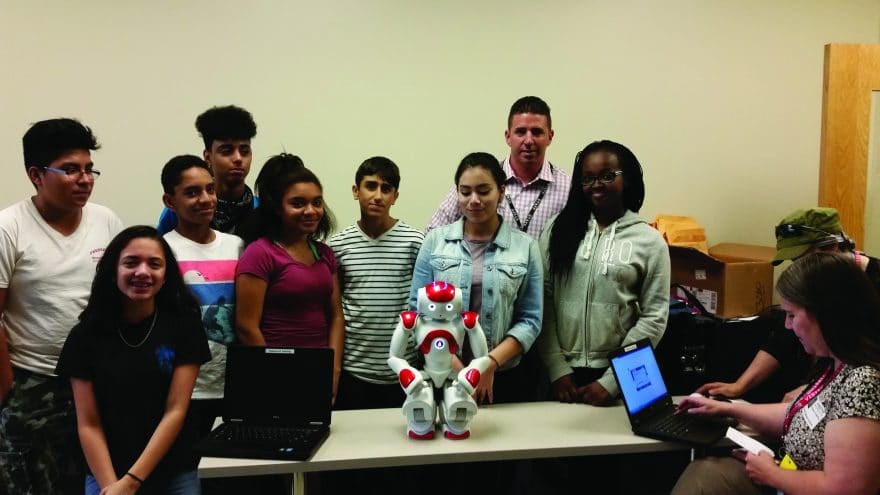 “As the global thirst for educational technology continues to grow, PCSD is taking advantage of all of these new tools and planning strategies for working within our district’s budget,” says district Chief Innovation Officer Janice Reid. “Fortunately for us, technology is moving in a direction where it has become more accessible to everyone, making it easier for our educators to provide equal opportunities to our students.”

Once PCSD embraced Google Apps for Education—which only requires schools pay for the domain name—the district found that students and teachers were excited to explore the new opportunities this platform provides.

“The collaborative capabilities of Google make the workflow for a teacher and student much, much, much easier.”

Through the Google initiative, PCSD schools have access to the suite of Google Classroom apps, including Google Drive, Google Docs, Google Slides and more. Students can access their work anywhere—at home, school or the library— and from any device—Mac, PC, phone or tablet—and they’re not lacking essential Microsoft Office skills even though they are not using the Microsoft Office suite.

“The collaborative capabilities of Google make the workflow for a teacher and student much, much, much easier,” Reid says.

Instead of a student printing their document or emailing it, they can put it in the Classroom. The teacher can make comments and edits right there online, so it improves the workflow as well as makes it more collaborative. There is the added element of saving paper, making this an environmentally friendly option as well.

Because students know where their work is and who can see it, Reid says, they take more ownership of it. That visibility has opened the doors to lessons on digital citizenship, a topic the district previously struggled to teach because it was hard to convey the complexity of appropriate tech use without these technologies.

Because students know where their work is and who can see it they take more ownership of it.

This real-time platform for assignments also helps teachers keep students focused on their school work. When a recent assignment began to veer off course because students started an unrelated side conversation with in the comments section, the instructor was quickly able to halt the chatting and return attention to the intended topic of discussion.

“What we have found is the more they have access to technology, the more students are prone to engage in discussions, “Reid says. “When you have those discussions without technology, students tend to be more shy or dismissive about the conversation. A virtual platform allows them to express their views in a whole new way.”

Through its partnership with the Lower Hudson Regional Information Consortium (LHRIC), a nonprofit consortium that provides educational and administrative technology services to 62 area school districts, PCSD is able to share a technologist who trains teachers right in their schools instead of the teachers having to attend seminars or lectures outside their school.

“With Google, the kids and teachers are learning at the same time, so it’s a collaborative effort where the two are troubleshooting and figuring things out together.”

According to Reid, thanks to the LHRIC support, PCSD teachers are more willing to try new technologies, and thanks to Google, the kids are too.

“With Google, the kids and teachers are learning at the same time, so it’s a collaborative effort where the two are troubleshooting and figuring things out together,” Reid said.

It’s developing a new bond between the teachers and their students because to some extent it dissolves the traditional hierarchy of the student-teacher relationship, she says. It gives them a common goal, which is to figure out how this new technology can improve their classroom experience.

And while there is a small learning curve to the newly introduced technology, this has not stopped teachers and students from embracing the platforms.

In order to bridge the gap between how many computers it has—not quite enough—and how many computers it wants—one for every student—PCSD adopted the “Chrome cart” model. In each building, the district invested in one or two carts of up to 30 Google Chromebooks. Teachers sign out the carts and wheel them into their classrooms.

“Ideally our teachers would like for every class to have their own Chrome cart, but they understand that this way, eventually, we’ll be able to sustain whatever we purchase,” Reid says.

The district is building its Chrome cart fleet gradually. This spreads the investment costs out, and if PCSD invests in the Chromebooks incrementally, it can invest in their repairs incrementally.

“For example, when you buy 300 computers at one time and then they all no longer function or become obsolete in three to five years from now, we don’t have the funding to fix all 300 three to five years from now,” Reid said. “But if we buy 100 computers a year for the next three years, then the replacement of the machines will not impact the District’s budget as much at one time. Thus making technology purchasing more sustainable”

The computers PCSD does buy are still only as fast as the infrastructure that supports them.

“Technology’s not cheap, and when people look at our budget, it’s hard for them to understand why we are spending millions of dollars,” Reid said. “But to build a strong enough infrastructure, that’s how much it costs.”

PSCD started with just 10 megabytes of bandwidth and then increased to 100 megabytes. Even then, there were many days that the district would use 96 or 98 megabytes. Now it’s budgeted for 400 megabytes. As PSCD continues to invest in its technology infrastructure, it will be able to use those 400 megabytes to full capacity.

In an effort to build their technology infrastructure, the district is actively seeking additional state and grant funding that would allow it to make investments in routers, wireless access points and network switches and to increase bandwidth to one gigabyte.

“In the meantime, until we can secure additional financial support for technology, we are just creative with the funds we have,” Reid said.