As Jeff Coiner likes to say, Springfield, Missouri, is a small town with a lot of big opportunities.

The city of roughly 160,000 is home to the headquarters of Bass Pro Shops, O’Reilly Auto Parts, and Prime Inc., as well as an Expedia business center, nearly a dozen colleges and universities, an airport, a zoo, and a thriving business incubator.

It’s a diverse, flourishing environment that has been fostered by a longstanding, shared commitment to innovation, entrepreneurialism, and collaboration—all of which inspired Coiner to join the city and dedicate himself to its forward-thinking mission. 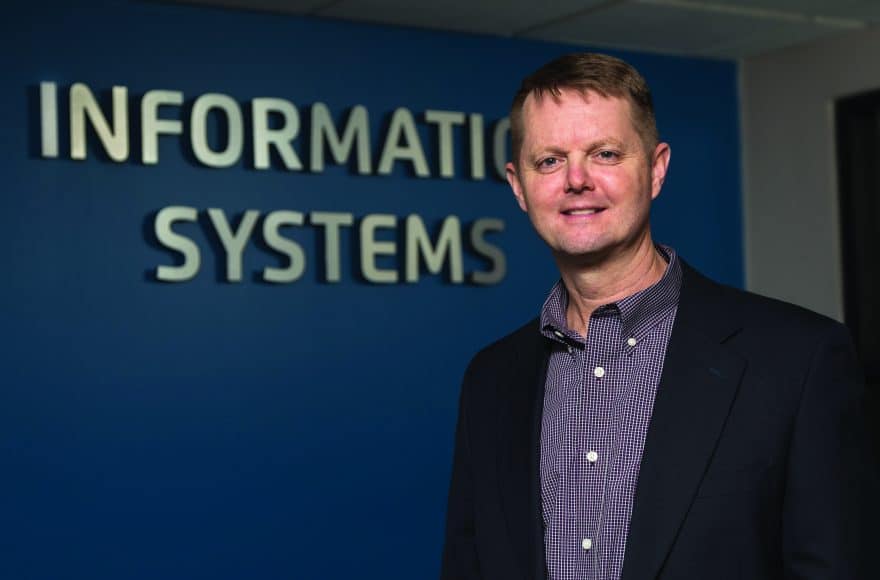 “There’s just a lot of good community spirit and cooperative spirit,” he says.

Coiner has served as the director of information systems for the city of Springfield for the past nine years, a role that he quips came about as the result of “accident or destiny.” He was born in Springfield and attended Missouri State University in the city, but moved back and forth between the city and other areas and states over the years to take information technology positions at various businesses in the private sector.

“This has always been home, I’ve always enjoyed living in Springfield, I always looked for an opportunity to come back,” he said.

He finally got that chance in 2005, taking on the role of director of information technology at Northrop Grumman Litton Interconnect, an aerospace and defense company in Springfield. When the company was bought out two years later, the opportunity came up with the city—and Coiner decided to take the plunge into the public sector.

“It’s the opportunity to make a difference,” he says. “It can be really innovative and progressive to work for a city. It’s really exciting work and there are always good projects to work on.”

A range of projects

One of the biggest initiatives currently being undertaken by his department is a migration to the Infor cloud platform. The city uses the software for asset management—that is, keeping track of issues that come up with crucial infrastructure such as sewers, streets and sidewalks.

“We’re expecting to see improvements in processes and our ability to report and analyze information,” says Coiner.

The team’s other efforts include upgrading to Office 365 for Business, implementing Oracle for financial and human resources management, and replacing the city’s previous police records management system with Niche, which it has integrated with its 911 software to create comprehensive reports. The department has also launched a centralized video surveillance project that has involved installing more than 200 cameras downtown, and it established a more streamlined system for the submittal and review of building plans.

A large physical undertaking, meanwhile, was moving the city’s data center underground— an effort that is helping to keep it safer and more secure.

All told, Coiner estimates that about 95 percent of Springfield’s infrastructure has been virtualized, which has greatly simplified day-to-day operations. “We’re more flexible in what we can do and how quickly we can do it,” he says.

The goal is to continually stay on the cutting edge, and move the city forward with technology, he says, along the way eliminating legacy systems and providing better capabilities both inside and outside the organization.

“There are so many different ways to do that now that it can be overwhelming,” Coiner acknowledges. “We want to continue to be innovative, continue to hire really good people and expand our knowledge, and stay on top of technology.”

Of course, Coiner says, none of these projects could be accomplished without the hard work of a strong team; his department is comprised of roughly three dozen IT professionals.

“We really do have a good group of people that work here,” says Coiner. “They are dedicated, hardworking people who just get things done. They deserve a lot of credit for all the things that we’ve been able to accomplish.”

“Our entire leadership team really does a good job of working together. We don’t want to be the department of no, we want to help other departments, help them solve problems.” – Jeff Coiner

In particular, having a cohesive team allows him the ability to be even more forward-thinking and “look down the road a little further” to analyze upcoming trends and assess the pros and cons of emerging technologies.

“Our entire leadership team really does a good job of working together,” he says. “We don’t want to be the department of no, we want to help other departments, help them solve problems.”

As for what he brings to the table, he emphasizes his well-rounded skill set honed over the course of his career working for a diverse array of private sector companies—from window manufacturer EFCO to oil and gas company ConocoPhillips. And there was another unique element he brought to the table, as well.

“I was the first IT director here that actually had an IT background,” he says. “I brought that knowledge and that background. I could sit down and talk with other IT professionals and understand their language.”

But in addition to fostering cooperation within city departments, Coiner and his team are equally dedicated to building relationships throughout the community.

He reiterates that it is an ingrained philosophy throughout Springfield—the free sharing of ideas and leveraging of local expertise to create a better community overall. That mindset permeates the city’s large established companies, small but burgeoning startups, chamber of commerce, nonprofits, trade associations, and colleges and universities.

“It’s the spirit of people willing to show what they do, and talk about things, and help others, regardless of the industry or anything else,” says Coiner.