Integrating technology into the day-to-day and delivering different instruction

In Salem, Virginia, the Salem City Schools (SCS) include Salem High School, Andrew Lewis Middle School, G.W. Carver Elementary, East Salem Elementary, South Salem Elementary and West Salem Elementary. All in all, the district has about 4,000 students in attendance. Jim Rieflin is the supervisor of technology and data management for SCS. As all levels of SCS — kindergarten to high school — transition to new online learning platforms and integrated 1:1 student devices such as Chromebooks, Rieflin plays a central role in laying the groundwork for new technology while ensuring these efforts align with each school’s mission.

Rieflin, who has been with SCS since 1999, says the role technology plays in schools has drastically changed in the last five years. “Today, everything is technology based, whereas before information technology [IT] and technology support used to be an ancillary role that might not be important in certain projects. Now, it’s involved in everything — from school security to how teachers deliver instruction, school administration and so much more,” he says. 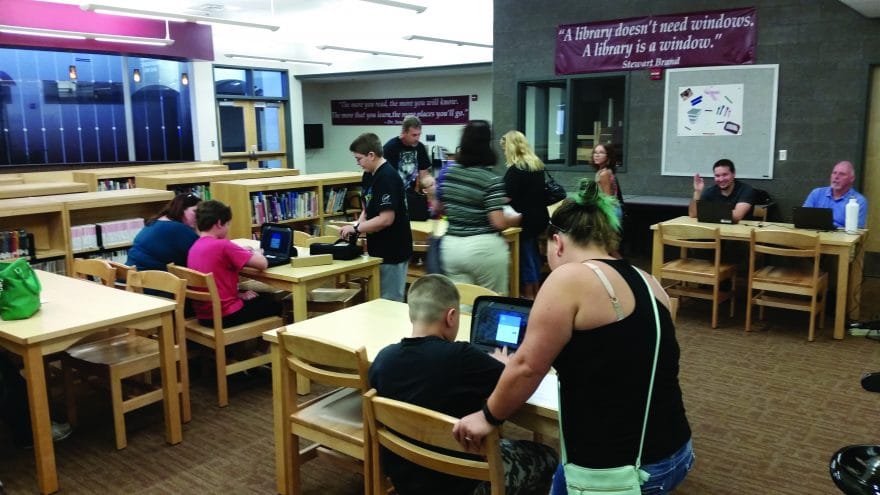 With a background in computer science and federal defense, Rieflin has been in the IT sector for nearly three decades. “My graduate work led me to Virginia where I got into the educational arena at Roanoke College and moved to Salem City Schools in 1999,” he says. “My title has changed over the years, but largely I’ve been managing all IT programs including infrastructure, networking and software implementations.”

Using technology to support the learning objectives of a school system is a constant learning cycle. “It’s about learning to apply the right technology to the right issue,” says Rieflin. “I learn a lot from the people I work with, especially our teachers. It’s important to work with them to understand how their roles work, how teachers and students think and learn, and what tools work best for them. Each person brings a different approach to the problems we face. When we work together we find the best solutions.”

In the last several years SCS has made a big push to drive classroom technology to the next level with the support of an innovation grant. “Our superintendent, Dr. Alan Seibert, is very interested in classroom innovation and how we can deliver instruction differently. In the coming years, public education will look very different. We are going through transformational times and technology will play a key role in supporting these changes,” says Rieflin. “My team is here to help SCS support this goal and grow in this direction.”

SCS has had support to grow learning in a new direction with state funding from a High School Innovation Planning Grant. “We were one of only five in the state, and the only school in southwest Virginia, to receive this grant which includes the opportunity to seek waivers from some of the normal educational requirements and rules about classroom hours and testing,” explains Rieflin. “The idea is that if a child can demonstrate mastery in a subject then they shouldn’t have to sit in on the remainder of the class. They should be able to focus on growing additional skills.”

SCS is now offering high school credits for middle school students. “If a student is aggressive and self-motivating then by the time they’re in 11th grade they can start differentiating their studies and shape their classwork into more of what they’re interested in and might want to go to college for,” says Rieflin. “We’re able to expand these opportunities to more students thanks to this grant.”

1:1 Devices in the classroom

Traditional classroom learning is also changing in the sense that it is becoming increasingly personalized. “Each student learns differently and at their own pace,” he says. “This is a challenge. The question for us is ‘How do we deliver the right information at the right time to a large number of students?’”

At SCS, the Chromebook plays a major role in this delivery. Like many districts across the country, SCS has ramped up its device ratio and now every student at the high school level has a Chromebook.

“Technology isn’t an ‘add-on’ where students ‘do technology’ for an hour a day. Rather the technology is part of every part of the day.” – Jim Rieflin, supervisor of technology and data management

“We’ve been evaluating the benefit of 1:1 for years and when the Chromebook came out, we determined it was the right product at the right price point,” says Rieflin. “Also, we have found that Chromebooks feature solid administrative tools which make providing service for so many devices a little easier.”

Although the 1:1 device ratio is becoming more prevalent in education, Rieflin says it was the advance preparation on the part of all parties that made the program roll out so smoothly. The IT department built a solid wireless network ready to handle the influx of 1,200 new devices.

“Years before we purchased the Chromebooks Jennifer Dean and the instructional technology resource teachers worked closely with our teachers to begin preparing instructional materials designed for 1:1,” says Rieflin. “At the time, we didn’t know what the device would be but we knew that a digital transformation was coming. We still use textbooks, but our reliance on them is much less now since we started developing a lot of our own content.”

A robust wireless network is essential to the smooth rollout of a 1:1 device program. In the past Rieflin’s team conducted classroom surveys to determine correct access point placement. “But today, with so many devices and the addition of bring your own device [BYOD], nearly every room needs an access point to handle the quantity of connections,” he says.

Now that the 1:1 Chromebook program is complete at Salem High School, the fifth-graders in SCS will receive Chromebooks in September 2016. “We’re currently building the infrastructure to make way for this,” says Rieflin. “We’re adding access points and increasing our bandwidth to the point to support these devices. And it is very likely that the Andrew Lewis Middle Schools students will have Chromebooks in September 2017.”

In addition to Chromebooks, SCS has adopted many Google Classroom products to assign and track assignments, send updates and stay in touch on projects and distribute grades. “We’ve done a lot with Moodle, but now we’re transitioning to more Google apps and there’s a lot that goes on behind the scenes to make sure teachers are able to use these learning management sites,” says Rieflin.

SCS is onboarding more cloud services as well. “We moved all email to the cloud two years ago. Now with higher bandwidth we can integrate more cloud services, which could reduce capital expenses in our data center,” adds Rieflin.

From supporting instructional delivery to supporting the business administration of the school system Rieflin says technology is now no longer an afterthought and as a result, he is part of any major project discussion and planning at SCS. “Today ideas need technology input from the beginning of the project process; it’s changing how we look at things and how we make a plan,” he says.

With so many ideas, ways to innovate and new devices coming on board, Rieflin says his biggest challenge is supporting his IT team and helping them deal with the rate of change. “When there’s a new program or device my team is often worried about getting up to speed so they can provide adequate service,” he says.

What it comes down to for Rieflin and his team is a simple question: does this (technology, device, program) serve the student well?

“We exist to serve students any way we can by providing excellent instruction and facilitating the learning process,” says Rieflin. “If technology can enhance this, then it’s a home run.”

As the supervisor of technology and data management for the Salem City School, Jim Rieflin continues to leverage resources to bring the best technology to the table for students and staff.