Taking IT higher in North Carolina.

As the school’s first chief information officer with an extensive background in both higher education and information technology (IT), John Champion oversees a $10.5 million technology budget and strategically applies IT resources to help support the complex organizational mission of the 4,500-student university. 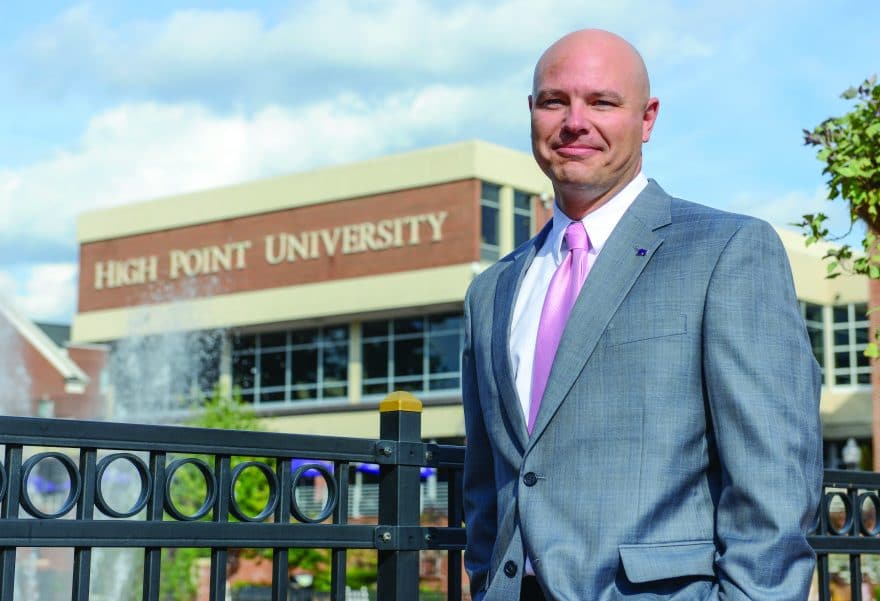 Having worked at a number of colleges and universities during his 16 year career, Champion was eager to take a position at an institution unintimidated by the prospect of implementing new IT solutions. “At a lot of institutions I’ve been at, I’ve seen the need to leverage technology better,” says Champion. “In my two-and-a-half years at HPU, I’ve been amazed at the level of acceptance and commitment to actually doing those things.”

When Champion presented the university with his strategic plan for the IT department after coming on board in late 2013, HPU’s administration did not bat an eye. “They said let’s start right now; so we left that meeting almost doubling the size of our team and significantly increasing the funding  in order to accomplish the goals outlined in the plan,” he says.

Champion sees the IT department as a strategic asset for HPU. If leveraged correctly, it could drive change and optimize institutional spending. His vision for the department includes improvements in six distinct areas: team development, infrastructure, security and data integrity, business operations, supporting academic initiatives and increasing outreach to faculty and staff.

“As an organization, we’re looking to grow and you do that through automation, business intelligence and other technology powered efficiencies,” says Champion.

Before earning a degree in business information technology from Walsh College, Champion got his bachelor’s in education from Central Michigan University. Before setting down the IT path, Champion  taught in kindergarten and first grade classrooms where he was given an unexpected lesson in management. “Everything I learned about management, I learned in kindergarten,” he jokes.

Struggling to decide between a career in education and IT, Champion started an IT consulting, project management and application development firm in 1998 called ChampSolutions. After graduating from Walsh, Champion joined Oakland University as an IT analyst, leaving a year later and moving to North Carolina where he would spend the next five years focused on the growth of ChampSolutions.

In 2008, Champion joined the University of North Carolina at Charlotte as technology team lead for instructional technology. He was soon promoted to director of technical operations and planning before landing his first CIO position at nearby Queens University of Charlotte in 2011.

Never fully leaving his educational background behind, Champion has served as adjunct faculty at Capella University since 2006, where he teaches a course in business communications for the school’s IT professionals program.

Over the course of his career, Champion has grown his skillset to include strategic planning, business process analysis and improvement, system architecture and design, budget development, cost containment and team building. Champion has brought his full arsenal of abilities to bear at HPU, where he is currently overseeing a number of initiatives and projects.

The largest of those projects is the current migration of the ERP system. HPU had a history of simply making customizations to its current ERP system, racking up some 3,200 such customizations before Champion arrived and proposed an overhaul. The university has decided to migrate to Workday for its ERP needs, a process which is currently underway.

Through the implementation of its CRM and revisions in a number of manual business processes that touched the ERP, the IT team was able to increase the admissions team’s ability to process applications. “We deployed the Hobson’s Connect CRM product and combined it with a number of ancillary improvements — including migrating our undergraduate application to the Common Application — the admissions team was able to solicit and process 50 percent more applications than the year prior in less time,” says Champion.

One of Champion’s favorite projects in his time at HPU has been the migration from a Cisco-based voice over IP (VOIP) system to Unified Communications, leveraging a Microsoft-based product called Lync, which the company has since renamed Skype for Business. “It’s a huge improvement from a business continuity standpoint,” he says. “Our users have team presence information, can text chat, video conference, conduct scheduled or ad-hoc web conferencing sessions and make or receive business calls from their desk phones, mobile devices or computers from any internet-enabled location in the world just as if they were in their office.”

When it comes to picking vendors or partners to assist in a new IT project, Champion starts with a list of specific functional requirements to define the problem and required outcomes. “It’s very helpful if you know what you’re looking  to accomplish; it’s too often that  we’ve seen the practice of reaching out to a vendor and signing a contract and then before you know it, you are overspending on a solution that doesn’t actually solve the root problem to begin with. Defining the outcome up front and developing the SOW accordingly prevents this problem,” he says.

As HPU continues to grow, Champion is particularly excited about the school’s new Health Sciences programs. A new $85-million facility will feature state-of-the-art teaching tools and capabilities, including 70- to 80-inch interactive whiteboards and fully Unified Communications integration with the new Skype for Business system that will make learning and collaboration between students easier than ever. “As faculty annotate over whatever they might have on screen, it can be shared real time across the globe or recorded and uploaded to our Learning Management System (LMS). That’s the kind of exciting experience this architecture has positioned us to provide for our faculty and students,” he says.

When Champion isn’t rebuilding a university’s IT infrastructure, he can be found performing similar top-to-bottom rebuilds of his Harley Davidson motorcycle, camping or spending time with his wife, 20-month-old and 14-year-old daughters. As the man responsible for connecting 4,500 students and 1,500 faculty and staff, Champion often works longs hours. “But it doesn’t always feel like work,” he says.

With a solid background in education and IT and a value-added approach to his job, John Champion, CIO at High Point University, will continue to help students, faculty and staff excel in their roles.