CIO and his team pass the IT tests during COVID-19 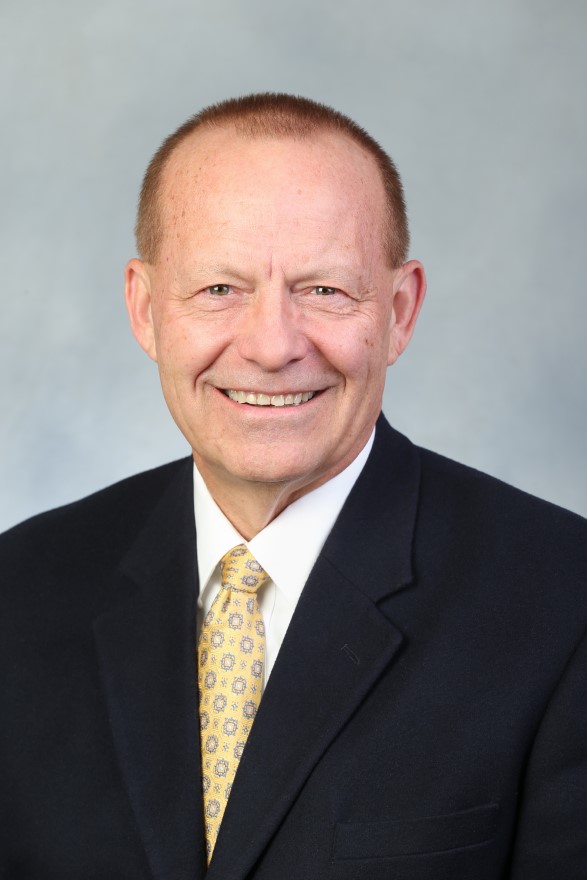 It’s been years since John Ellinger’s been to class, but there’s no doubt he and his IT team were tested in 2020 at Bowling Green State University.

In his more than 30 years of IT experience at the university level, he’s built events management systems from scratch and guided cloud migrations for campus operations and learning systems. However, none of his experiences come close to the tests he and his team faced as COVID-19 arrived in Ohio and closed the BGSU campus in spring 2020, he says.

As CIO, Ellinger oversaw the shift to virtual learning. To be sure, the infrastructure was largely in place to support remote education, but preparing the campus for a hybrid learning approach was exhausting—and exhilarating—as was procuring the necessary wares.

“Watching our BGSU team perform was one of the most rewarding experiences in my career. This was a ‘how good are you?’ type experience,” Ellinger recalls.

Founded in 1910 in Bowling Green, about 30 minutes south of Toledo, BGSU has an enrollment of more than 17,000 with 2,000 more students at its Firelands campus in Huron, Ohio.

In March, as students were getting ready for spring break, Ohio officials and campus administrators were preparing measures to combat the COVID-19 pandemic. 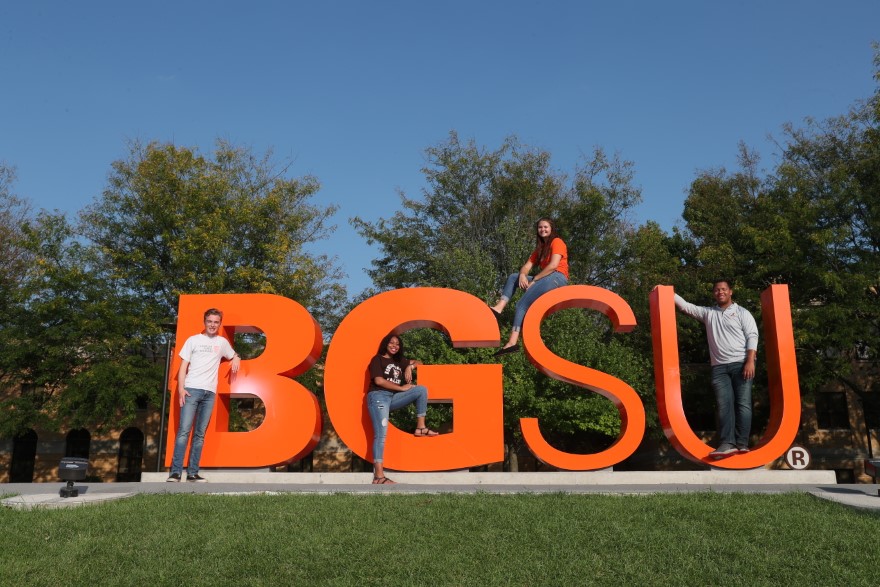 Ellinger and his team of 98 were already setting the stage for BGSU to shift to virtual learning and operations, although, at that time, it was not expected to last through the semester.

Beginning March 10, the IT team gathered 450 laptops used around campus, cleaned them, returned them to the original settings and added Adobe and Microsoft platforms and software. More laptops were on order, but demand and supply chain issues pushed delivery back from one week to seven—the digital equivalent of closing the barn door after the horses were gone.

BGSU had already migrated about 70 percent of its application operations to the cloud (an increase from 20 percent in 2010), as well as its learning management software and other content.

With a large enrollment of first-generation students and recipients of financial aid such as Pell Grants, Ellinger knew some wouldn’t have access to virtual learning and the internet. To ensure all students could continue their studies, 160 laptops were distributed to those students, along with Wi-Fi hotspots. 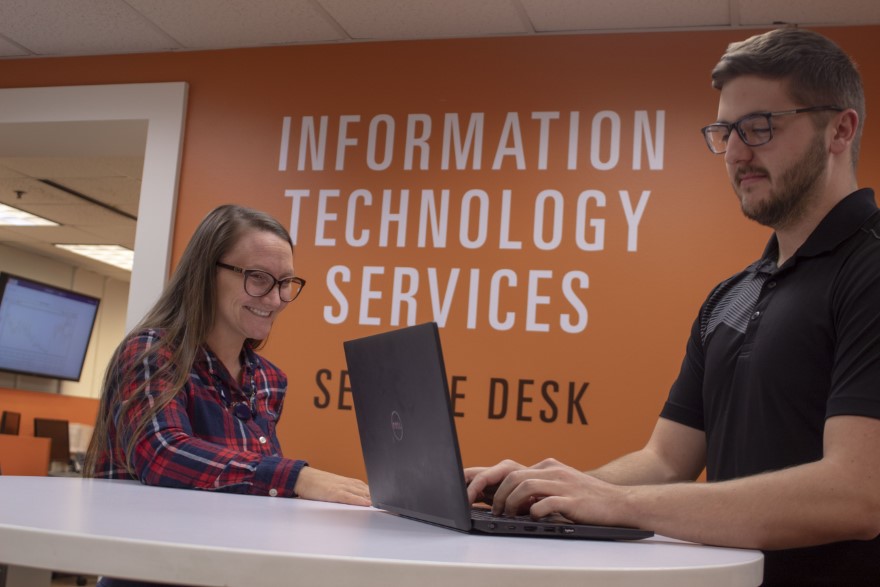 Students had already left campus, so the shipping costs were funded as part of $300,000 in donations also used to pay for emergency housing, food and transportation.

Ellinger and his team also linked students to more than 800 computers in campus labs. The virtual private network they created for students allowed use of licensed software content in those computers and showed which individual computers were in use and which were open, he explains.

Ellinger estimates his team worked nearly 24 hours a day in the 10-day period when BGSU moved 22,000 students, faculty and staff to its virtual program.

“There was a point in July when I called it my every minute project prize,” he recalls. “Every single day I would get a call from someone to solve a problem before school started! What had been a list of 10 projects June 1 became 63 projects by the end of August. Every day there was a new one, and we already had a long list.”

Among the projects was reconfiguring campus computer labs and classrooms to meet physical distancing requirements while installing microphones and cameras so in-class teaching could be viewed online. The BGSU IT team also created Adobe virtual forms so students could complete their personal health information. 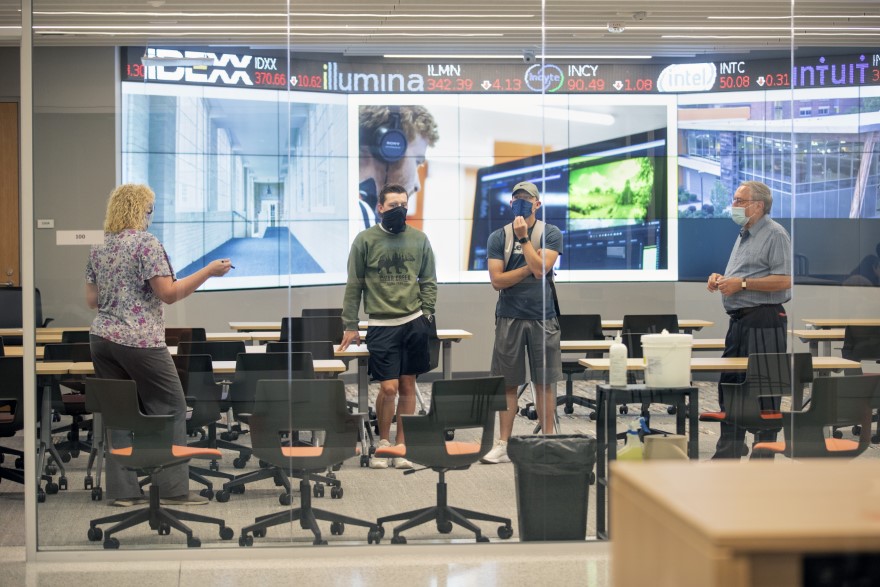 “It was one of those scenarios you live through and do everything you can. Did we know anything about illness tracking or tracking software before the summer began? No, but we sure learned a lot,” Ellinger says.

In fall 2020, BGSU went from fully virtual learning to a hybrid approach and then back to virtual as COVID-19 entered a third surge. As of December, the university planned to return to a hybrid model when the spring semester begins in January 2021.

The pandemic is unprecedented, but Ellinger’s been around tech so long that he outdates the internet.

A graduate of Ohio State University, he went to work at his alma mater in 1979 as the associate director at the student union.

Turns out there were a lot of events to manage and he quickly tired of trying to do so only on paper. With the help of a surplus VAX computer and two computer science students, the first multiuser event management system was developed. 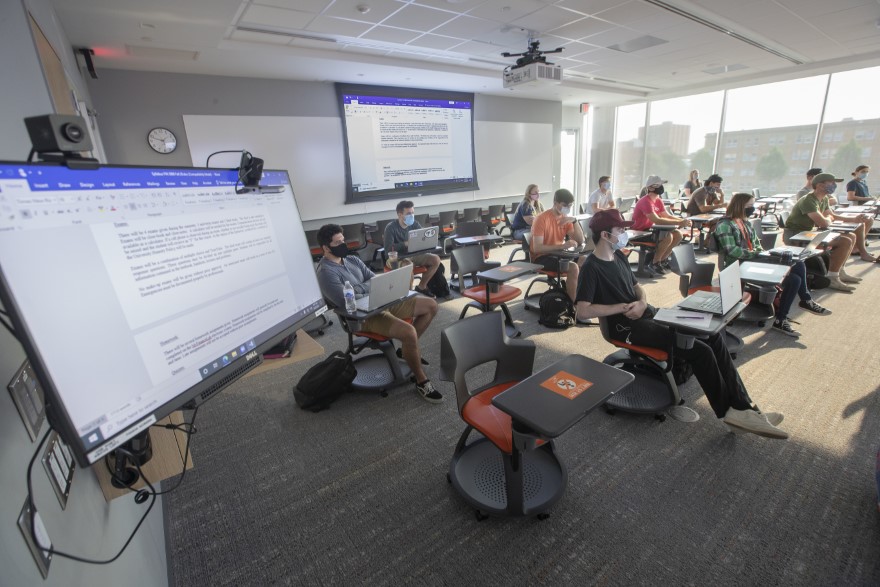 In 1988, Ellinger became assistant vice president of agriculture administration and enlisted more help to create spreadsheets to track payroll and salary increases for 2,200 staff. That, in turn, helped him land the lead role in OSU’s project to implement the PeopleSoft system for HR, payroll, finance and student systems across campus.

He was senior director at the OSU IT office in early 2010, when he shifted to consulting work for several Ohio universities—which brought him to BGSU as CIO in September 2010.

The rest may be history, but the continued emergence of IT is a crucial lesson for all.

“IT touches everything now,” Ellinger says. “IT is in the driver’s seat. We need to maintain and act like we’re the leaders of the system. When I first came to BGSU, people asked what I was going to do. I always said, technology is my toolkit but you’re going to tell me what I need to do. I’m here to be your partner and solve problems.” 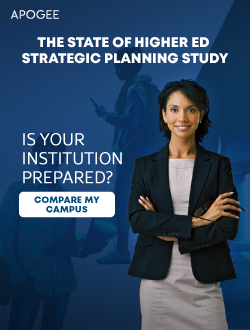