In a rural New Hampshire school district, you can get there from here

On his first day of work, John Martin, the director of technology and innovation at the Inter-Lakes School District in New Hampshire, came out swinging—literally.

Sledgehammer in hand, Martin (and his team) busted down the walls and gutted the technology department space previously described as “the rat’s maze.” The message he sent and the sign he hung up was clear: The Inter-Lakes Department of Innovation & Technology was open for business.

In Martin’s mind, geography should not limit the technological opportunities available to every student. To that end, this alumnus, who joined the Inter-Lakes school system in 2015, embraced any and all opportunities to connect Granite State kids to the outside world via many different programs such as the New Hampshire School Connectivity Initiative which seeks to enhance high-speed broadband access for K-12 public schools throughout the state. 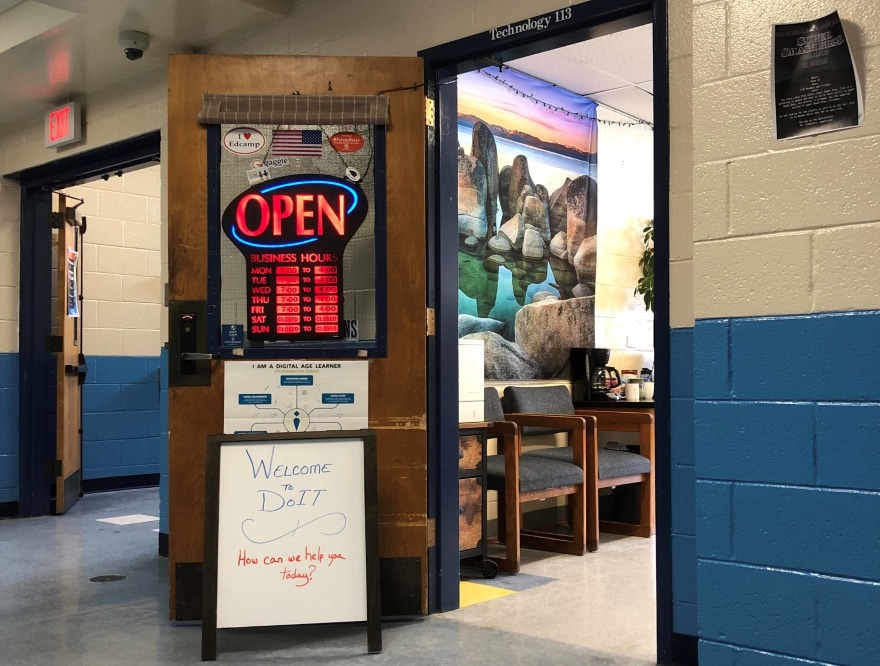 His most pressing issue was trying to decide which of the myriad projects to tackle first. To lure the technologically shy out of the woodwork and gather feedback, Martin simmered hot cider and put out a platter of cookies to draw people in to informally discuss their needs and experiences. From there he developed his master plan for the school.

“It’s a small town and the most important thing is building trust and relationships. If you can’t relate to the people you are there to support, you are fighting an uphill battle. Burning any bridge is costly,” Martin says. “I told my staff the first words out of our mouth will never be ‘No.’ I will always listen to what someone has to say and work to find the solution to their problem.”

Martin knowingly took the job with a full disclosure about the networking abomination in the closet.

Opening the door, he describes what he saw as “an explosion of spaghetti” hanging everywhere, a true rat’s nest. Unravelling that mess seemed as good a place as any to start. The closet was just the tip of the iceberg; In the process of that project Martin literally replaced 11 miles of cable with 500-600 drops throughout the district’s system and rerouted the server’s infrastructure to a single server farm.

“It was critical. We were dealing with 20 years of unplanned growth in an older school which simply had more and more tacked onto whatever was in place,” he says. “We had to take a triage approach: assess our systems, identify those areas of most critical need and rebuild from there. It was multitasking at its finest because although this work was important, it was time consuming, yet our service and support role was and still remains our primary focus.”

The wiring problem was but a pit stop in the development of the Inter-Lakes information superhighway. Next up was the old firewall and filter system, a technological bottleneck impeding connectivity with its lack of bandwidth.

“There was a lot to do behind the scenes and we had to get to that first,” he says, explaining there were 1,110 Chromebooks and 500 desktops to connect in the system. “It was an intensive effort for us, but with the infrastructure situation squared away, we finally reached a point where we could leverage our technology investment effectively and efficiently for our learning community.”

Beginning in the 2017-2018 school year, Martin expanded the 1:1 Chromebook Initiative whereby all students at the high school were provided a Chromebook for use in their classes as a common web-based learning platform through the primary grades.

“It was important to get the technology out there and available while offering the district the support and the educational infrastructure that was necessary,” he says. “Having the technology allows the students to take ‘healthy risks’ in learning and as a technology team supporting the student, we wanted to be warm and welcoming.”

Future staffing is perhaps the only concern that may affect the program. Since Martin started four years ago, staffing has ebbed and flowed and it’s a delicate balancing act for the community, based on declining enrollments and budgetary considerations.

In northern New England there is a saying: “You can’t get there from here.” As a native New Englander Martin knows this and had to find other ways to meet program challenges that would pass muster with the folks at the annual Town Meeting.

Take a server farm upgrade for example. A project such as this typically has a price tag of $80,000—a lot of money for a small rural community that must plan a hefty expenditure up to 18 months in advance. The problem associated with going about purchases that way is running the risk of saving up for something that has become obsolete. 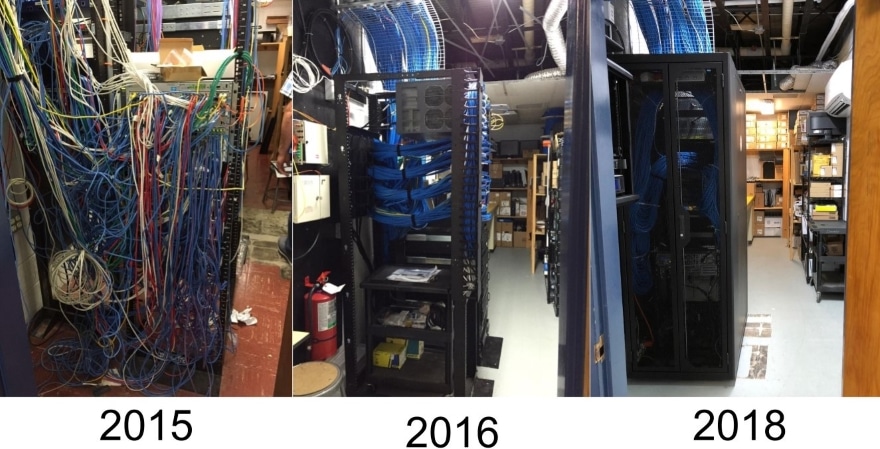 What to do? The answer for Martin was to lease technology. Four-year lease cycles certainly smoothed out the budgetary peaks and valleys, making it a solution everybody at town meeting could live with.

With cost-effective leasing options, he upgraded classrooms with the latest 75-inch interactive whiteboards; is ensuring a consistent replacement cycle for his desktops, laptops and Chromebooks; and is experimenting with HoverCam’s Pilot Podium systems as well.

In the first year the school implemented Texas-based Newline’s TruTouch TT-750UB interactive whiteboards/HoverCam Pilot (gen 2) solution to replace outdated units that were less compatible with advancing technology. Martin initially purchased one unit and did two rounds of testing and training. In the second year he utilized the Newline boards with onboard computers (Open Pluggable Specification, or OPS units), wireless keyboards/mice and HoverCam Solo 8Plus document cameras.

The OPS system upgrade was well-received by teachers and students alike who enjoyed the smorgasbord of interactive capabilities and handy additions such as motorized adjustable wall mounts to accommodate any person’s height and a multi-touch screen that could accommodate up to 10 students, where before each screen was only a single touch. Over a two-year period 64 units were phased in over the summer. Martin liked the fact that the units did not rely on proprietary software, so they could easily fit in with the district’s needs.

With the heavy lifting involving infrastructure under control, it’s on to the next project.

Topping that list is upgrading the district’s wireless capabilities. Martin will be looking at the best way to allow users from both a networking and security perspective to incorporate any device brought forward by a student or teacher. Not every Chromebook can adapt to a student’s web-based learning needs; sometimes students will have different requirements for drafting, graphics or computer programming itself.

“We are reviewing our use of Chromebooks at the middle-high school level. Our learners there have widely varying needs that are not always addressed through those devices. If a device cannot be utilized in a way the meets our student needs, it effectively becomes paperweight,” he says. “We need a wireless system that can grow with us and enable us to provide a managed and secure BYOD environment. Our reality is not either/or but rather both/and in that we will likely employ both district-owned and managed devices to ensure a measure of equity of access, while also encouraging and supporting personal devices where they are appropriate.”

Students within the district are getting more than just an upgraded technological system. With Martin, a graduate of the Class of 1987, they are getting lessons in life experience as well.

You see, Martin could have gone either way in his career with equally strong passions in both education and technology. Initially he was serving on the School Board when the director of technology became ill, and he heeded a different call to help students and the director as well. 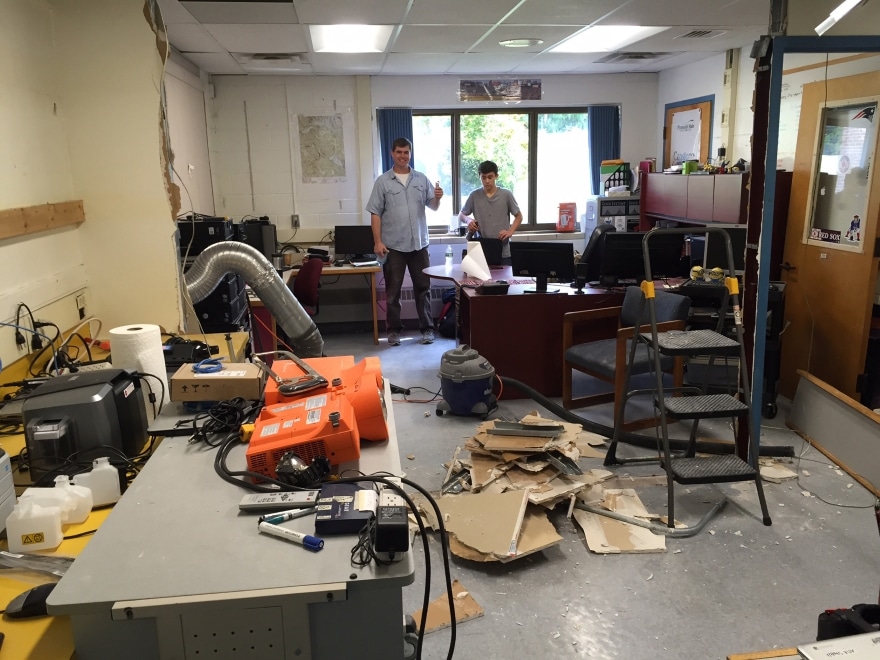 “I have always been an educator at heart,” Martin explains, “But early on I wasn’t a dedicated student, I just did what I needed to comply and get by. Not unlike students of today, there was this big external push to go straight to college, but after a year I still had no idea why I was there or what I wanted to do and dropped out. College immediately after high school is not necessarily the path that works for everyone.”

In the wake of that experience Martin joined the Navy and saw the world, training and working as a cryptologist in the rapidly advancing field of computer technology. It completely changed his perspective and put him back on the college track, earning his first degree while on active duty, eventually leading him to earn his master’s degree in computer technology education.

“I developed a broader sense of what is possible on a number of different levels and I brought that home with me,” he says. “I see my job as supporting students and I will do everything in my power to create opportunities for them.”

A key point he stresses to students in and out of the classroom is to allow themselves the time to really identify with what they are learning and to truly pursue what interests them.

“Learners today are fixated with ‘content consumption’ but I want them to become content creators. I tell them that it’s not what you know, it is what you can do with what you know,” he says. “The more that you understand, the more amazing things you can do, and the students in rural New Hampshire deserve the same opportunities as those in any other urban area.”