Computers are like trumpets, and students are learning to play them

For about as long as there have been personal computers, educators have been finding ways to incorporate them in the classroom. In 1975, for instance, Apple began donating its Apple 1 computers to public school systems to get students engaged with technology. As these and other devices became more sophisticated, so did their integration into schools.

“My generation would say that technology is a tool, but I don’t think that’s what the kids would say. Kids would say it’s an instrument for learning.” – Kirk Langer

Kirk Langer, chief technology officer for Lincoln Public Schools in Lincoln, Nebraska, remembers the early years. He joined the school district in 1991 and at the time was little more than a handyman, “the guy who knew about computers and stuff.” While beginning in that position, he quickly came to view computers as more than just word processors or calculators, but ways to help students communicate.

But like many Americans at the time, his colleagues simply viewed computers as a new way to boost productivity or store information.

“My generation would say that technology is a tool, but I don’t think that’s what the kids would say,” says Langer. “Kids would say it’s an instrument for learning.” That’s an important distinction. “If I hand you a tool, you’re going to work,” says Langer. “If I hand you an instrument, you’re going to play. Proficiency with that instrument is achieved through an act of will to express oneself, to connect with others.

From repairman to adviser

Since the early years, Langer’s role has grown in responsibility and importance. Where once the IT department mostly provided tech support or made infrastructure decisions, it now chooses the devices students will use every day. Langer personally contacted teachers for feedback on the district’s Device Assisted Learning Initiative that provides students with laptops and tablets. Langer wanted a computer that allowed students to fluidly write, research and email but didn’t allow them to download distracting applications.

Langer says these tasks are “endemic to the very thing you’re trying to accomplish, which is being connected with others,” and that this connection means students learn better because they have easy access to their teachers, the internet and to each other.

Now much technology is necessary

It’s inextricable from most departments: important school data are stored on servers; teachers and administrators communicate through email; students complete assignments and talk to one another on mobile devices.

However, Langer says nothing illustrates the value of technology quite as clearly as a devastating fire that occurred in late May 2011. The Lincoln Public Schools’ district office burned to the ground, and with it, all of the servers and devices. “The district realized how dependent it was…it had a very personal, community-facing and organizational realization that it [couldn’t] do what it [was] supposed to unless it [was] taking care of this resource,” says Langer.

When it came time to rebuild the office, Langer advocated for a more comprehensive backup system and recovery plan. In the process of rebuilding, Langer strove to achieve a balance between technology that could be “transparent, but never invisible,” he says.

Technology must be unobtrusive—but also apparent

Transparent technology is user-friendly and efficient, allowing students and teachers to focus on their goals rather than on the device itself. But Langer says that a school’s infrastructure shouldn’t become invisible, “lest [the district staff] forget it and fail to maintain it.” 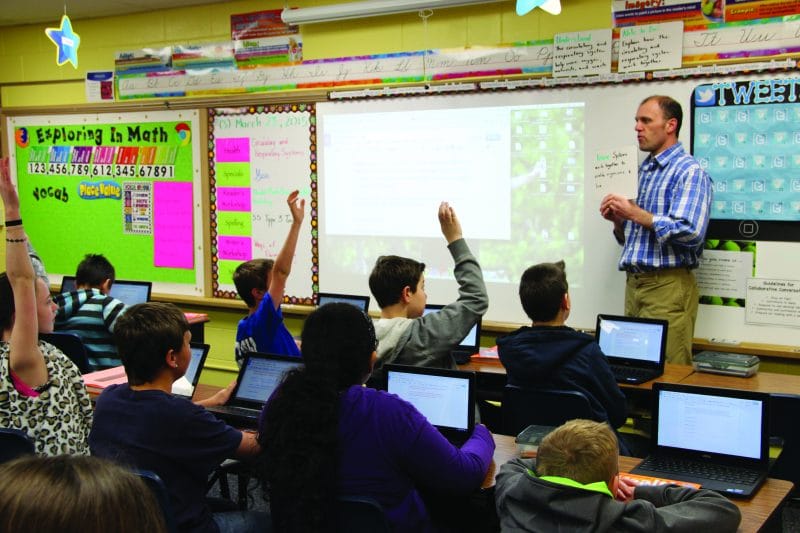 This balance between transparency and invisibility is a large part of Langer’s job. For example, he now has a role in the construction of new schools. His intent is to continue the buildout of a powerful fiber optic cable system and increase the capacity of the district’s server, storage and information security infrastructure. These improvements are at once highly visible to the district but will also ensure the schools’ learning efforts are supported by viable, user-friendly technology.

When he reflects on the early years, Langer says the shift in classroom technology from crude, esoteric computers to devices that defy simple classification is positive, albeit challenging, especially in a school district that’s adding 800 to 1,000 students a year.

The first day of school each year is especially challenging. Looking a year down the road, Langer says, “I get a little antsy” planning that far ahead for funding, logistics and responding to the rapid developments in the field.

At the end of the day, Langer says the job reminds him of his favorite pastime, hockey. He has to keep his head up and eyes open. He must see the puck without losing focus of other players. “I can’t get myself so mired down [in the basic operation] that I don’t pick my head up and look where I’m going,” he says. “If I don’t, I’m going to get clobbered.”