Wired to serve in good faith

Think of that most noble pursuit of missionary work, and what roles come to mind? For sure, those of pastors, doctors, nurses and agriculturists, all willing to immerse themselves at personal sacrifice, in some of the world’s most undeveloped regions.

But don’t overlook the contributions that a technology professional can make, reminds Kirk Nugent from his office at Oakwood University, an Adventist-owned Historically Black University (HBCU) in Huntsville, Alabama. It’s the chief information officer’s third post with the Seventh-Day Adventist Church that has employed him in various locales since early 2008. 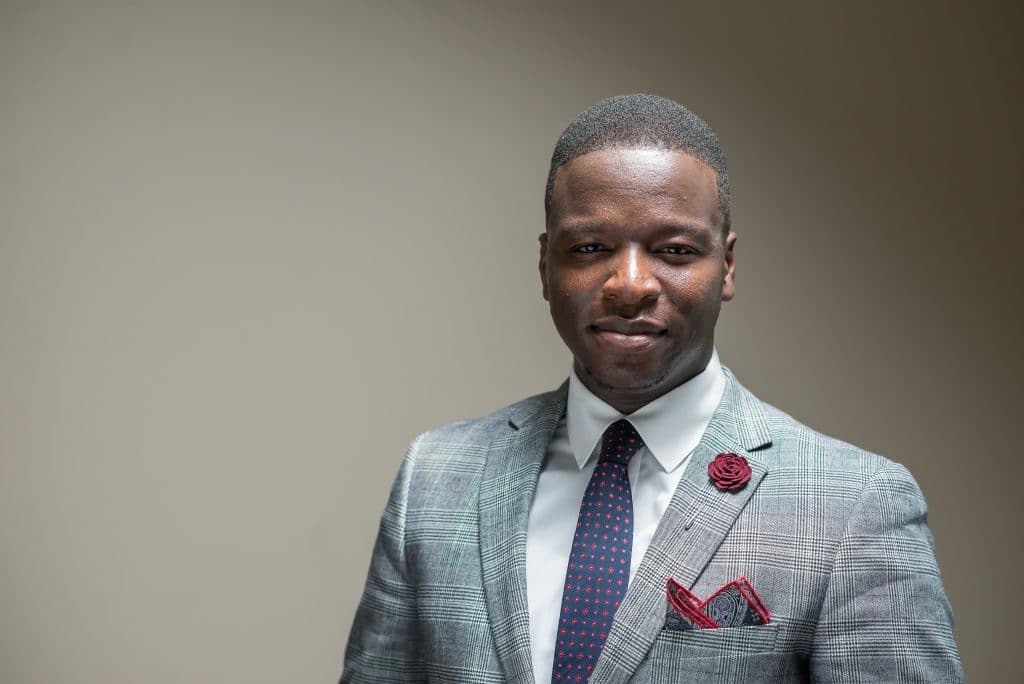 Among those former jobs was a four-year stretch in Pretoria, South Africa, where he put his technical expertise to use as a missionary serving the church’s southern Africa and Indian Ocean regions. If you’re curious about how one can mix technology skills with missionary work, just ask him.

“I relish the question,” the friendly and devout 38-year-old Nugent tells Toggle during a late November interview. “I love explaining how it’s always possible to connect your passion with your profession, and how your skill set—whatever it is—can be as valuable as anyone else’s in sharing the gospel of Jesus or simply making a difference in the lives of others.”

Having distinguished himself with NASA’s Goddard Space Flight Center and T. Rowe Price after studying engineering and computer science at another Adventist school—Andrews University in Michigan—Nugent was recruited by that Protestant faith in early 2008 to oversee tech support for its accounting software department at its Silver Spring, Maryland, headquarters. In the summer of 2011, the Adventists would send him to South Africa for a four-year stretch with his wife and two small children.

“I’m told it’s rare for African-American missionaries to go to that continent, at least from the Adventist church,” Nugent explains. “One reason they thought I’d be a good fit is because I looked like the people we’d be working with and serving there.”

But, more importantly, the church also saw Nugent as a good fit for enhancing overall technology efficiency. While the regional office had IT personnel in place at its division, union and conference facilities, it didn’t function as a cohesive structured operation that could streamline solutions to whatever issues might arise in the southern Africa region.  Nugent was able to implement an interdependent, fully functional IT department in all levels of the division, enabling the church “to fulfill its mission of sharing the love of Jesus.” 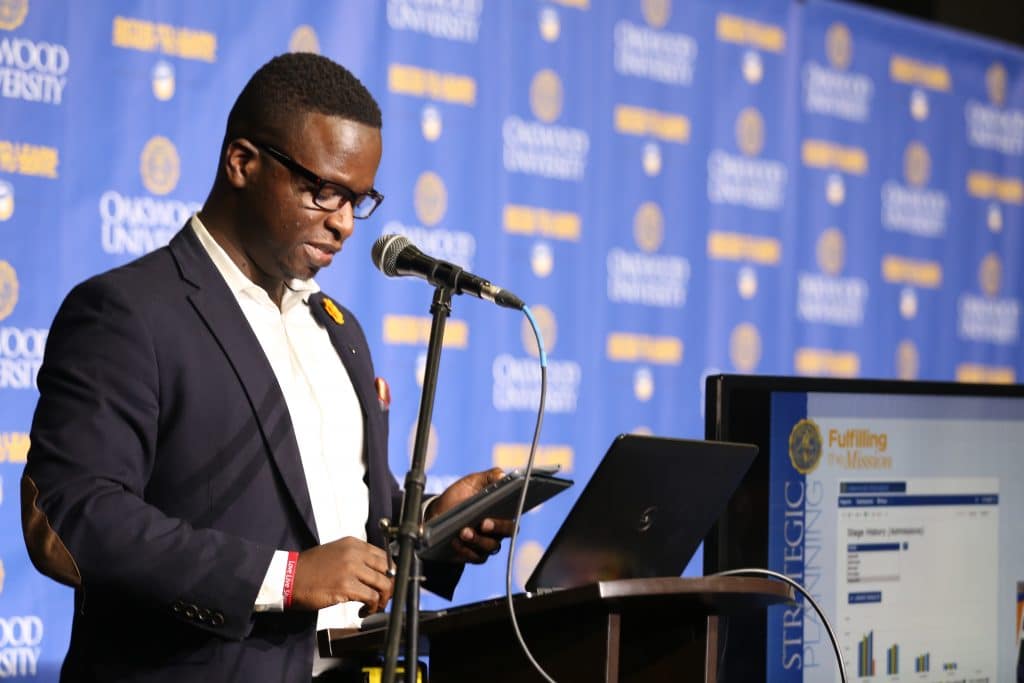 In the process, the Adventists might have also helped fulfill the aspirations of a more earthly martyr: Nelson Mandela, whose 2013 death coincided with Nugent’s years in Pretoria. Just being in South Africa to witness progressive change would have made those years meaningful, he says.

“It was so uplifting to see South Africa take on the awesome task of moving past the scourge of apartheid,” Nugent says. “Of course, vestiges remain, but the marvel of South Africa is that so many know where they had gone wrong and are doing their best to right those wrongs.”

At home on campus

Comfortably settled in Huntsville with his family since August 2015, Nugent’s contributions will be mostly on campus. A lengthy to-do list confronted him from the start, as the technology division needed reorganizing. He engaged student leaders to deliver student-focused technology solutions like PaperCut and a mobile app. He secured external funding to conduct a major network and telecommunications overhaul, and trained the tech team to respond to a major cyberattack and to implement virtual desktop infrastructure.

In just these past two years, his impact has been significant. He’s also ensuring that Oakwood’s students can benefit from some of the same arrangements made available to him years ago at Andrews University.

That includes the student worker program, which once provided Nugent with duties at his alma mater’s technical division, the value of which really came from the times when he and his fellow student workers would engage in what grownups might dismiss as “bull sessions.”

“We’d sit and talk of current events, what the trends were and how a new platform and technology would be used by new industries,” he remembers.

Info-tech expertise being in much demand around 2000, many student workers left early, garnering well-paying positions in a burgeoning industry. Nugent, however, stayed in school, anticipating an even bigger payoff once he had the degree. That he earned—in 2002, when the specter of Y2K was bringing much of the tech industry to a standstill.

“My resume was hitting desks along with those of seasoned veterans,” Nugent remembers. “It took me a while to find work.”

Actually, it was just a few short months before Nugent went to work as a computer technician for Goddard, between August 2002 and January 2004. Afterward, it was four years at T. Rowe Price, first as a computer support specialist and next as a market data analyst and then on to the Adventists.

Be it Maryland, South Africa or Alabama, Nugent reminds that a wired world will only become more so. He sees technology as a great equalizer, a means that enables anyone to be heard, provided they have access to the systems.

“It’s neither that hard nor expensive,” he says, but adding that sometimes a young person just needs that extra push. Perhaps like a deadline with incentives that he began at Oakwood. 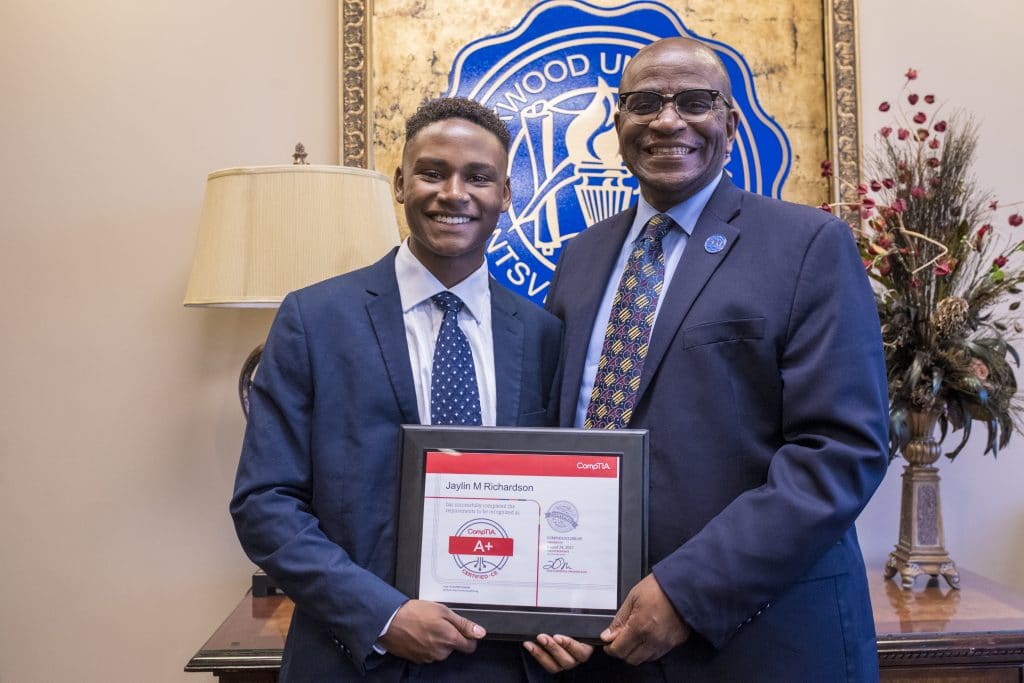 A couple of demanding exams stand between a student and a professional designation. Each exam costs $200, and while a student discount may reduce it by half, even that may be beyond the means or priorities of a young person.

Nugent’s advice: “Schedule that exam!” Meanwhile, the school will provide study guides and practice exams, and be there to mentor the students. Should the student earn that coveted A-plus certification, Oakwood reimburses the exam’s cost.

Which is what it did for young Jaylin Richardson.

Nugent saw aptitude aplenty in the student worker who had helped with a Windows 10 upgrade. He, too, was apprehensive about spending limited funds on the exams, but with Nugent’s encouragement he scheduled and aced them.

Proud as he was to be in a congratulatory photo with university President Leslie Pollard, Richardson nevertheless came back to Nugent for a portrait of just the two of them. Nugent expects Richardson will go far, but adds he feels the same about many students at the campus.

“The highlight of this job is seeing the impact you can make on a young person’s life,” he says. “Nothing compares to seeing that light go on.”