Funding is a constant challenge for public schools, especially those serving low-income communities. In a time when student and teacher access to technology has never been more crucial, Matthew Peterson, director and chief information officer for Glendale Elementary School District (GESD) in Glendale, Arizona, has taken a value-oriented approach to building up the district’s technology program.

Located approximately 10 miles northwest of Phoenix, GESD serves upward of 14,000 students and their parents, and employs more than 1,800 people across 17 schools. Peterson considers them all users in terms of the district’s varied technology equipment, connectivity and communications. “Each of these groups interacts with a different set of services,” he explains. “Our job is to make sure everything is running properly, whether that’s internet, email, phone, our websites, applications or databases.” 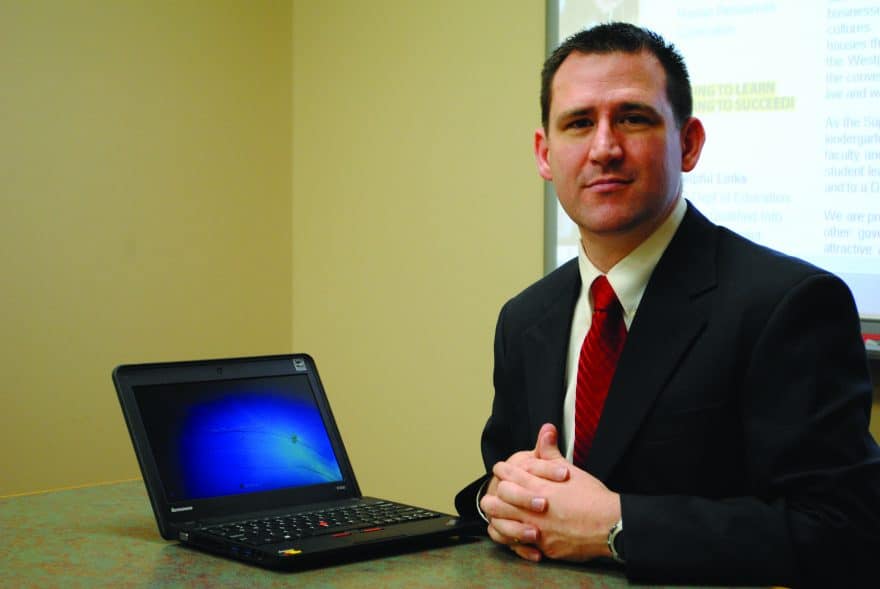 Peterson has been with GESD for six years; he operated his own consulting business and has previously served in leadership positions within the information technology sector. He wrote the award-winning fantasy novel, Paraworld Zero, and was the host of TheAuthorHour.com radio show where he interviewed dozens of world-famous authors. His knack for creative problem-solving has proven crucial in keeping the district up to speed and ahead of the curve when it comes to technology.

For students, each school has at least one computer lab and every classroom has a minimum of five computer stations as well as a SMART interactive whiteboard, projector and document camera. The district has approximately 2,000 mobile devices, including laptops and tablets, though Peterson says GESD has not hopped on the student tablet bandwagon. In addition to the hardware and software infrastructure, his department of 20 (six of whom are field technicians) supports 18,000 devices in over 700 classrooms.

“We don’t have the renewable funds to support a one-to-one initiative, but we do get bond and grant funds from the government,” he notes. “With that bond money, we bought standalone stations and incorporated virtual technology with Microsoft Multipoint Server and GreenBridge Computing hubs. It was a creative solution and that’s how we were able to get five stations in every classroom. With laptops, we would have been able to get two per classroom at the same cost as five MultiPoint thin clients that will last three times as long as the mobile alternative.”

Each of GESD’s 1,800 staff members has initial tech components. For teachers that includes a powerful Lenovo ThinkServer, a SMART board, a projector, a document camera, an IP phone and associated programs and infrastructure. Peterson opted for actual servers in every classroom for greater speed, stability and longevity. “The previous computers were over 10 years old and funding for low-income schools is rather precarious so I had to get something that would last,” he explains. “They’re blazing fast and now the teachers can spend more time teaching.”

Peterson and his team have created a unique in-house integration system to tie the databases together. “We set our system up so that all of these databases talk to each other,” he elaborates. “So data from the student management system talks to food services, transportation, human resources, the library and dozens of other systems. From that we are able to do more than we would normally be able to do; that’s a significant time and cost savings, plus it helps us make sure our data is in sync, clean and fast.”

Vendors have told Peterson that GESD is their only customer who has been able to extend their products like this. With staff and student RFID cards, the process is further enhanced, allowing the differing offices and departments to monitor and manage activities ranging from student busing and lunches to library checkouts.

“We are constantly looking at innovative ways to accomplish things without spending money we don’t have,” says Peterson. “That’s where the Multipoint server has been amazing. We didn’t have enough money to continue with our labs, but because of Multipoint, we have not only been able to get three additional stations in every classroom, we’ve also been able to keep the labs, and that became extremely important when Arizona mandated online testing. With the increase of devices we were prepared for online testing, for which we were one of the most successful districts in the state.”

Beyond connecting students, teachers and administrators, Peterson’s decisions regarding the district’s tech program have helped save time and money by streamlining the data fed to the state. “This data is very time consuming — staff spend hours fixing the data; even something as minor as an incorrect birth date means a request comes back from the state for a fix,” he elaborates. “Even one error can prevent the district from getting funded for a student, so I created an in-house validation system to clean the data before it’s even submitted.”

“We use this same system for analytics and decision-making,” he continues. “It combines data from attendance, grade books, report cards, special education, language, transportation and the gifted program, using hundreds of validations and reports to make sense of the data and to keep it accurate.”

Staff members can correct this data before submission, ensuring that the district retains money for the students it serves and saves time that could be better spent educating young people. “I talked to the chief information officer of the Arizona State Department of Education and he said the state receives millions of data errors and that he wished the other districts would do what we’re doing,” says Peterson.

“What most people don’t realize is that school districts have all the complex systems that large enterprises have, but we have to support that technology with much lower budgets, staff and salaries,” Peterson concludes. “We don’t have a choice; with the rising demand of technology in the classroom, we’ve learned to do more with less.”

Peterson’s innovative approach to technology spending on a tight budget has made a massive difference for the school district. He and his team members continue to make upgrades, most recently to overhaul Glendale Elementary School District’s entire network infrastructure with Extreme and Fortinet equipment, in order to improve operational efficiency and provide resources that will ensure student success in the 21st century.