In the Coachella Valley in Riverside County, California, the Coachella Valley Unified School District (CVUSD) is one of the poorest school districts in the country. Home to nearly 20,000 students, CVUSD covers a 1,250-mile range. Many students in the low-income region still do not have internet access at home, let alone personal devices.

In the last several years the community has rallied around new technology programs, passing a $42 million bond to put iPads in the hands of all students, grades pre-K-12. CVUSD has also helped to bridge the digital divide by adding Wi-Fi routers to 100 school buses, which also serve as routers after school, bringing Wi-Fi to the poorest reaches of the district. 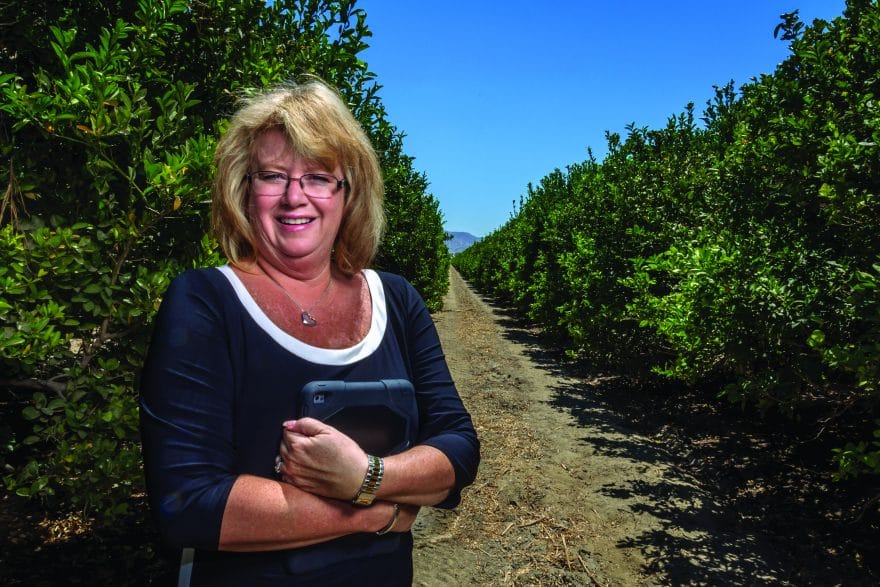 These innovative programs have drawn national attention and the district’s superintendent, Dr. Darryl Adams has been applauded by President Obama for CVUSD’s efforts and named one of the most influential people in education technology by Tech & Learning. “We’ve promised the students and the parents 24/7 learning in a 21st century teaching and learning environment,” explains Adams. “24/7 access is a critical issue, because if you don’t eliminate that digital divide that gap between the students whose families can afford a connection and those whose families can’t will continue to grow.”

Part of the reason the district has seen such success is strong community support, administrators that see the value in these programs and the leadership to carry technology in the right direction. CVUSD’s technology department is headed by Michelle Murphy, executive director of technology services and chief information officer (CTO) for CVUSD.

Murphy oversees a 30-person technology division, including six certificated staff and 23 classified members. She works as a liaison to connect all parts of district administration, including the superintendent’s office, school board, education services and faculty to build an approach to technology that works for CVUSD’s particular demographics.

“Our student population includes 100 percent free and reduced lunch children; 98 percent of the population is Hispanic and for the majority, English is their second language,” says Murphy. “The Coachella Valley is home to many migrant workers, farmers and hospitality workers. Not that far away, there are other communities where many families earn six-figure salaries.”

With these demographics in mind, CVUSD has captured a unique opportunity to bring greater equality and open new doors for students that wouldn’t have access to iPads or Wi-Fi and teach them how to be good digital citizens.

“Unlike some districts, we don’t lock down the devices in terms of blocking social media sites,” explains Murphy. “We view social media as a teaching tool when it is used in the right way and students who aren’t using it appropriately are the only ones to have it blocked.”

CVUSD does filter inappropriate content based on age group and federal regulations but encourages students to use social media outlets like Facebook and Twitter to learn and read the news. “We encourage them to use the tools they will use in their careers and their life outside of school,” she says.

Students are required to take a class on internet safety and cyberbullying to learn the acceptable ways to use the internet and Murphy’s team offers additional classes for teachers. “They can request an Ed Tech T3 (Teacher Training Teacher in Technology) come in and help train them on Common Sense Media and how to integrate social media into the classroom,” she says. “We also promote digital citizenship by doing a Skill of the Month districtwide. For example, this month we’re working on not infringing copyrights.”

Just as CVUSD is helping prepare students to be good digital citizens, Murphy’s department also works to educate teachers through professional development. “As part of the ed-tech department we have established the iCenter, which teaches technology integration,” says Murphy. “Teachers can take a five-week course called SAMRai and get up to speed. I just graduated myself and we’ve had 175 grads in the last two years including school administrators.”

With the iPad roll out in full swing, Murphy and the administrators at CVUSD set out to increase Wi-Fi accessibility for students. The district now has a fleet of 100 buses outfitted with routers and 10 vehicles with solar panels on the roofs to keep the router batteries charged.

“The newest phase of the Wi-Fi on Wheels project includes seven surplus vehicles, also Wi-Fi enabled, that are parking in different parts of the valley, near some of the mobile home parks,” says Murphy.

“Our board of trustees has allowed us to think outside of the box when it comes to providing state-of-the-art connectivity and technology to some of the neediest students in America,” says Dr. Darryl Adams, school superintendent. “This type of thinking and collaboration changes lives and increases the opportunities for students to succeed and prosper in the 21st century.”

With many ongoing technology initiatives and the necessity that technology now plays in and out of the classroom, Murphy’s department has scaled up considerably since she joined in 2012. “When I started there were just three technicians,” she says. “We now have 10 people dedicated to working on technology on-site.”

The roles in the CVUSD information technology (IT) department range from an ERP specialist to a network engineer, a project specialist and more. “We also have someone who oversees our websites and the school social media who reports directly to me,” says Murphy.

More and more, the professionals in this department are no longer just running repair tickets; they are in the classroom, assisting teachers and students directly. Even the job description of a librarian role has changed at CVUSD. “We have instructional media assistants,” says Murphy. “They’re expected to work with students and their iPads and coordinate with us.”

Murphy, who was an elementary-level teacher for 14 years, a principal for eight years and once the director of elementary education, understands firsthand the frustrations teachers have in dealing with a sea of changes. “Before I started as CTO I was asked by Dr. Adams to sit in on an Apple training for teachers with the new iPads,” she recounts. “Before long I was tasked with leading the training for 20,000 teachers and students, starting with the ed tech department and other teachers and support staff.”

Murphy went back to school to get her CETPA technologist certification in 2014 to broaden her horizons in school technology. “This really gave me a new perspective on my career,” she says. “There has been a huge cultural shift in schools. Your ultimate role as an IT professional isn’t just fixing a computer, you’re serving students and staff, not only get devices working, but to support classroom instruction and student achievement.”

Advocating for tech as a voice at the table

On an even higher level, Murphy works with the school’s superintendent, executive cabinet and the school board to plan and execute CVUSD’s technology agenda. “Before it almost felt like technology didn’t have a voice, but the reality is that technology plays a role in everyday student learning. We need it to have a seat at the roundtable; districts who aren’t doing this are falling behind,” she says.

Murphy serves as a means for her staff — as well as students and faculty — to communicate what is working and what needs rehashing. “I’m the ultimate translator,” she says. “I might not understand every technicality of something, but I can translate and communicate the goals with the key decision makers in the district.”

With a voice to promote the use and necessity of technology, Murphy and her team are looking at some new and exciting programs for next school year. “We have written a coding and robotics implementation plan for K-12 and are opening four Maker Spaces,” she says. Students will be tying into this coding course some robotics work, programming the popular Sphero educational robot.

“We’re also looking at some Personalized Learning Programs, sponsored by Facebook and started by Summit Schools at the middle and high school level,” adds Murphy. “And we are hosting our first student film festival for student-made iMovie projects.”

At the end of the day, boosting a student’s desire to learn is No. 1. “We have an obligation to teach students in the way they want to learn,” says Murphy. “If they need the level of engagement an iPad provides, we will give them that opportunity.”

Michelle Murphy and her team at the Coachella Valley Unified School District are giving less fortunate students the opportunity to be more engaged and learn the digital citizenry skills that will carry them through their later lives.