At the end of the day, a laptop isn’t that different from a textbook. Without proper instruction, it’s almost useless.

That understanding is essential to how Neal Weaver, digital learning coordinator for Santa Fe Public Schools (SFPS), does his job.

To help teachers integrate technology into their classrooms, SFPS has created the Digital Learning Plan—a five year initiative that began in 2014 and is putting state-of-the-art technology in all classrooms, as well as giving all teachers and students in grades seven through 12 a computer or mobile device to take home. 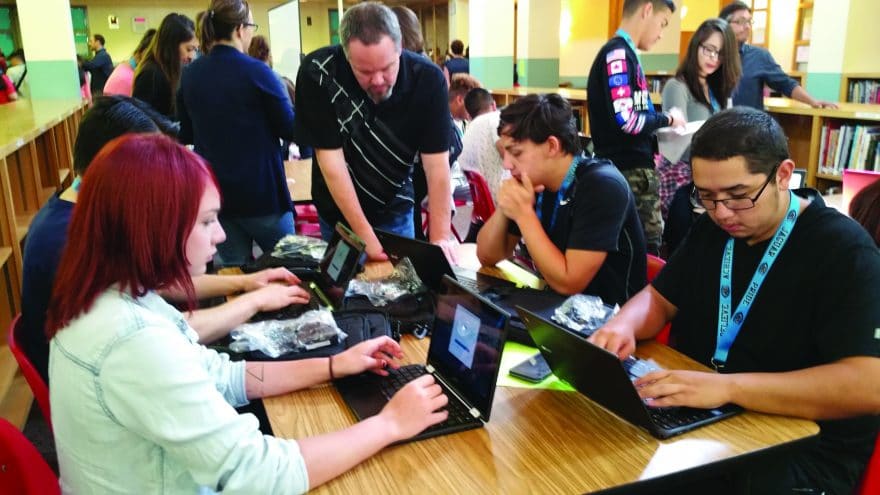 But Weaver says it’s not enough to heap devices on teachers and students. They need training to use the new technology.

“If you’re only using a smart board as a presentation medium, that’s simply substitution [for a blackboard],” says Weaver.  “What we’re really looking for is redefinition, where you’re doing things with that technology you couldn’t have done before.”

Proper training, not just gadgets, is vital to tech education

To help teachers incorporate technology, Weaver and his team have created a series of four-day workshops spread out over the school year. The workshops begin with basic lessons on operating digital devices like laptops or smartboards. Over the course of the year, teachers learn to design lesson plans and assignments that incorporate the devices.

In one instance, students learning about soil erosion researched and shared video files with each other in small groups. After the group work, the students created presentations on their own. Weaver thinks collaborative activities like these enable students learn from one another at the same time they’re learning how to use important, modern tools.

Weaver says the benefit of this teaching approach is it not only enhances the classroom projects, but also encourages good habits in- and outside of school. “One principal told me that students are more organized because they have access to their Google calendars 24/7—they have access to their documents and can no longer say ‘I lost it’ [when they don’t have an assignment],” he says.

From fast food to education

Part of Weaver’s success with the Digital Learning Program is due to his personal experience as a manager and teacher. Before joining Santa Fe Public Schools, he spent 12 years as a multi-store restaurant manager for Wendy’s from the ‘90s to the early 2000s.

While working for the major franchise, he got his first taste of creating instructional workshops and teaching young people. At Wendy’s, Weaver also oversaw the development of a training facility for all new managers in his district and conducted seminars on effective management practices.

After leaving Wendy’s, Weaver decided to combine his interest in technology with his passion for teaching youth by becoming a technology instruction coach at a Cleveland High School.  While at the school, Weaver managed the technology staff, provided technical assistance and also held seminars on using school computers. Weaver says that it was in public schools where he “began to see real student learning through the integration of technology in the classroom.”

In 2014, Weaver was hired as the digital learning coordinator at Santa Fe Public Schools. He says the district was looking for, “an educator who would focus on technology instruction as a driver for integrating technology into the classroom.”

Getting up to speed

Though his focus is on helping teachers integrate technology into lesson plans and assignments, Weaver still spends considerable time helping update the hardware and fiber optic cables the district uses to connect its computers to the internet.

For years, Santa Fe’s schools had outdated internet and were using up precious space storing bulky fans and air conditioners to cool their servers. For much of this time, the district lacked the money to support major updates. But in 2013 and again in 2016, school board members and city tax payers voted to pass an Education Technology Note (ETN). ETN is a funding mechanism that allows the city to spend property tax money on classroom technology.

“We will likely run one of the fastest internet networks in the state of New Mexico.” – Neal Weaver

With this new source of funding, the district was able to install an advanced, passive optic network that has sped up its internet connection. Passive optic networks are much faster and more space and energy efficient than traditional networks.

“We will likely run one of the fastest internet networks in the state of New Mexico,” he says.

Weaver says that a benefit of having one of the largest passive optic networks west of the Mississippi River is it won’t fall out of date for “years and years.” The new system will also free up space in schools across the district. For instance, some Santa Fe high schools formerly had up to 13 IT closets to store servers and cooling equipment, but now have just one closet dedicated to the new technology.

To make the upgrades more affordable, Weaver and his staff are installing the new technology in phases. They have broken the schools into four groups, giving priority to the oldest and most outdated schools so students in them are not at a disadvantage to students in newer schools.

“One of our priorities is getting devices in the hands of all of our students and not just the students who can afford to bring their own device,” he says. “We must be equitable in teaching all students how to become digital citizens, using technology responsibly to become engaged life-long learners.”