Championing an analytics-based approach to education

A mechanical engineer by training, Kumar first came to the United States in the early 1990s to pursue an MBA from Western Illinois University. Kumar then took a position with a market research firm, where he was surprised to learn how difficult it was to track down certain information.

“We had a lot of challenges and I thought, there has got to be an easier way to do this and share information,” he says. 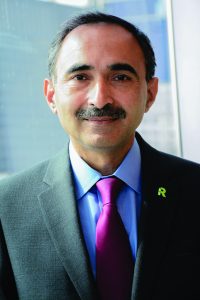 This frustration led Kumar to start developing an innovative intranet system, kickstarting a passion for technology that would come to define his professional career. “As we started to roll it out I saw the possibilities. I really enjoyed it and decided to do this full-time,” he says.

Kumar entered the education technology sector in 1997 when he joined SCT — now Ellucian — as a project leader. A global leader in higher education software and services, Kumar’s seven years with the company would serve as the ideal introduction to a career in education technology and come in handy when it came time to negotiate and implement future technology initiatives with vendors.

During his time at SCT, Kumar was instrumental in integrating the company’s Banner student information system into the world of higher education. The role allowed him to gain exposure and make vital personal connections at colleges and universities across the country, including Roosevelt.

As institutions began to place more of an emphasis on their technology needs throughout the late 1990s and early 2000s and started creating C-level technology positions, Kumar found himself increasingly in demand and joined Roosevelt in 2005 at the request of then-CIO Brad Reese.

Following Reese’s departure in 2008, Kumar ascended to the school’s top technology position. Today, the CIO is responsible for a $3.3million budget and team of 45 technology professionals, who work together to meet the myriad technology needs of the 5,500-student university.

Ever since his days with the market research company, Kumar has placed great emphasis on the power of data. Now he’s working to integrate that same analytical approach to decision making into the educational realm, starting with classroom assessments.

“For example, if students are taking quizzes in Blackboard, faculty members should be able to tell how long it takes them to finish, which questions they had trouble with and where they need to put more effort into a particular subject,” Kumar says.

Kumar has also championed the creation of a Technology Advisory Group at the university. Devised as a means of vetting technology initiatives, the system helps cut down on the adoption of ill-conceived or faddish technology rollouts by putting all proposals in front of a team of 18 professionals from across the university’s colleges and administrative departments.

“We ask the university community to submit all the initiatives they’re interested in. In any given year we have 20 to 30 projects that come through and we invite these people to do a presentation to the group,” he says.

The 18 panel members complete a survey on each proposal, winnowing the field down to a list of priorities, which are then submitted by Kumar to the university’s executive council and budget committee. “We’ll tweak that list sometimes, and analytics is an example of that. It was reprioritized because we’re focused on student success and figuring out why they’re dropping out, failing, etcetera,” he says.

The school is now working to create what Kumar calls a Student Success Network, drawing on a range of analytics to track where problems arise and when to stage an academic intervention. “If we know where the challenges lie, we can reach out proactively,” Kumar says.

Kumar believes that this collaborative and analytical approach can be used to improve nearly any process or system.  Another example of this is how Roosevelt University developed a dashboard for the board of trustees so they have access to all the high level data that is discussed at board meetings.  This gives them the opportunity to come to the meeting ready to have an informed and substantive conversation on topics vital to the school’s future.

“What use to happen when we had board meetings was they would come in and come across some surprises, so our president asked how we can get our board members to be more engaged so they don’t come to hear us talk, but to participate and discuss,” he says.

Prior to board meetings, members are provided with all the latest enrollment, retention and funding data, giving them an up-to-the-minute look at the issues facing the institution. “That way they can ask questions along the way and not wait to attend a meeting,” he says.

The recession might have had a positive impact on college enrollment in general, with 12 percent higher enrollment in the fall of 2008 than the previous year, but the effect was not felt equally throughout all corners of higher education.

Roosevelt had long relied on older and part-time adult students returning to school to pursue graduate degrees. These students were encouraged in part by reimbursements from large local employers such as Motorola, Grainger and AT&T, but these subsidies dried up when the recession hit and large, local employers started belt-tightening.

“That use to be a big focus for us and all of our systems and technology were designed to accommodate that. Then the recession hit and we had to throw that all out the window,” says Kumar.

The shifting student population required Kumar and the Roosevelt technology team to retool the entire system to better address the needs of more traditional college students, ages 18 to 24.

“We had to make sure all of our systems and processes were aligned with recruiting, sustaining and ensuring that a traditional student body persisted,” he says.

Demographics have now begun to trend back in the direction of an even balance between traditional and nontraditional student populations, requiring Kumar to once again restructure the institution’s IT offerings and learn a valuable lesson about organizational flexibility in the process.

Roosevelt recently welcomed a new president, who has been in the process of forming a new leadership team at the university. Kumar is particularly encouraged by the new president’s approach to technology, which he sees as a strategic tool. “I now report directly to him and we’re being relied on to be more strategic and aware of everything that’s happening,” he says.

As technology continues to become integrated into every aspect of student life, Kumar says the organization must be careful to continually tailor their offerings to an increasingly tech-savvy user base.

“Our primary audience is current and prospective students who have been digital natives, so we have to ensure the technology and resources we’re delivering are in line with their expectations,” he says. “They’re use to Uber and Amazon and then come to a university where, because of lack of funding, may have not invested that much in technology.”

Kumar and the Roosevelt technology team have launched a number of initiatives to address this gap between expectation and reality, including a revamped website and mobile app focused on giving students the critical information they actually want.

“The app is more focused on things that students need to know, and is based on feedback from the student body,” says Kumar.

By crowdsourcing input on the new app, Kumar and his team were able to integrate features into the app that might have never occurred to them otherwise. “For example, they wanted to know when laundry machines are available, which would have never occurred to me. Same for the computer labs,” he says. These are the things that students actually think about.”

The app can direct students to the nearest vending machine or preview the dining hall menu, as well as serving more traditional academic functions such as allowing students to review their grades, schedule and financial aid information.

This approach to technology — one that prioritizes the way students are actually using their devices —will allow chief information officer Neeraj Kumar to ensure that students at Roosevelt University are well prepared for success in the classroom and beyond.