The striking nature of the Grand Canyon State has molded life there, but not just wildlife. Located in Flagstaff, Arizona, Northern Arizona University (NAU) draws inspiration from its chiseled, mountainous location 7,000-feet above sea level.

NAU’s IT department draws particular inspiration from its surroundings and embraces the “frontier town” mentality of Flagstaff, which sits between Humphreys Peak, Arizona’s highest mountain, the red rocks of Sedona and the enchanting painted desert. 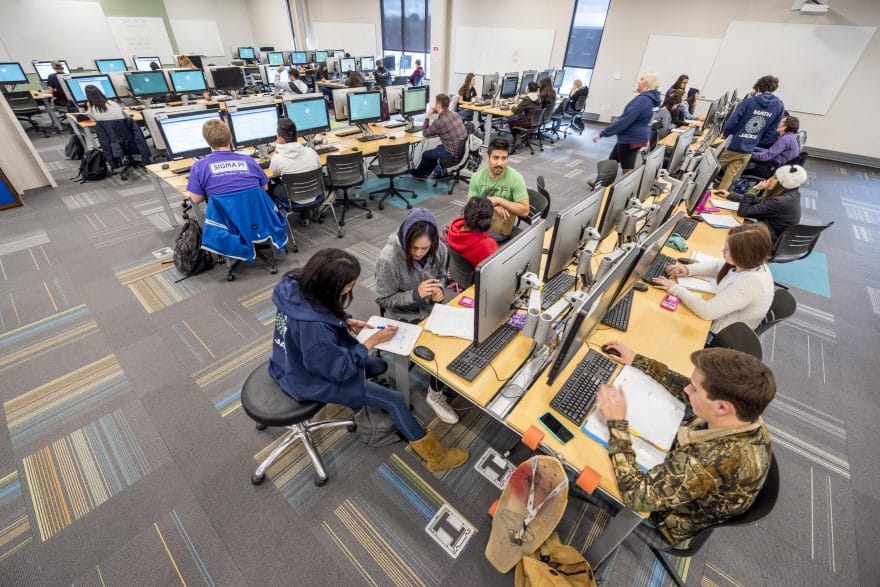 “I think the spirit of being part of this diverse and bold environment reflects on the initiatives we’ve been involved in, to make a profound statement and difference in how we approach modern higher education,” says Steven Burrell, NAU’s vice president of IT and chief information officer.

A mountain of metaphor

NAU is the recipient of several technology-focused grants, including a Frontier Set grant sponsored by the American Association of State Colleges and Universities—funded by a Bill & Melinda Gates Foundation award, which recognizes institutions willing to “explore new and untested approaches”; an iPASS grant, which supports the use of technology for advising and degree planning services; and a grant sponsored by the Association of Public Land-grant Universities, which aims to “speed postsecondary educators toward effective use of high-quality adaptive courseware.”

Burrell says these grants are helping NAU evolve in a way that is both dramatic and organic, in much the same way the landscape of Flagstaff evolved.

“There was a time period when dramatic events disrupted the geology and ecosystems around Flagstaff, but these events ultimately led to new opportunities and beautiful outcomes, so I see the parallel there, particularly in some of the grants we’ve received,” Burrell says, alluding to the volcanoes that once shaped the region.

With those improved recruitment analytics, NAU is learning how to better spend its marketing dollars. That’s important to a community like Flagstaff, where conservation of resources, whether money or water, is second nature. 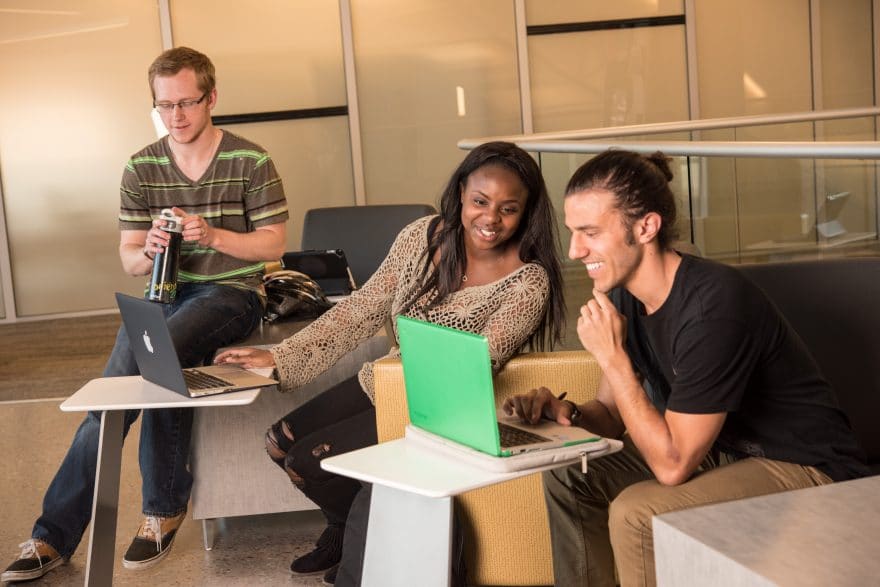 In addition, NAU’s use of technology and data analytics in recruitment is somewhat revolutionary and dramatic, Burrell says. It speaks to NAU’s pioneering personality. It demonstrates, too, how the university is piloting and evaluating new approaches.

“Much the same way Native Americans and homesteaders experimented with ways of surviving and building communities,” he says.

Ultimately, Burrell hopes NAU, like Flagstaff, will find sustainable ways to leverage technology not only to survive but to thrive.

The pool of grant funding is helping NAU leverage technology and data analytics to improve rates of student retention and graduation.

NAU is now using adaptive learning software like Smart Sparrow, in which students are assigned learning modules based on their individual performance and understanding of course materials. Such software can look at how students perform on individual test questions, for instance, and use those as indicators of future success.

NAU will use data gathered through adaptive learning software to improve all of its courses, especially challenging or gateway courses. Often, if students do not succeed in those classes, their chances of graduating in four years drop significantly.

“All analytics come together to create an upward spiral that feeds into us helping students,” Burrell says.

From frontier to crossroads

Beyond grants, carefully selected partnerships are helping NAU meet its tech goals. Sun Corridor Network, for instance, is an enterprise of Arizona’s state universities to connect them to the national high-speed research network via Internet2.

Sun Corridor’s 10Gbps connection in Flagstaff has helped NAU make the business case for third party providers to bring fiber to the university.

“Flagstaff, being a frontier town, the super information highway really hadn’t reached us when I arrived a year ago,” Burrell says. “There were some frequent outages and limited bandwidth, which inhibited our access to internet-based resources.”

Now NAU is working with Sun Corridor Network to partner with other education and civic institutions to increase fiber in the region. Burrell hopes to turn Flagstaff into a frontier city that’s “not at the edge of the internet, but really a crossroads.”

The increased bandwidth has made it easier for companies like Troxell Communications Inc. to bring updated classroom technology to NAU. When survey data indicated students and faculty wanted access to consistent meeting space technology throughout NAU, Troxell designed and installed it in 130 classrooms. 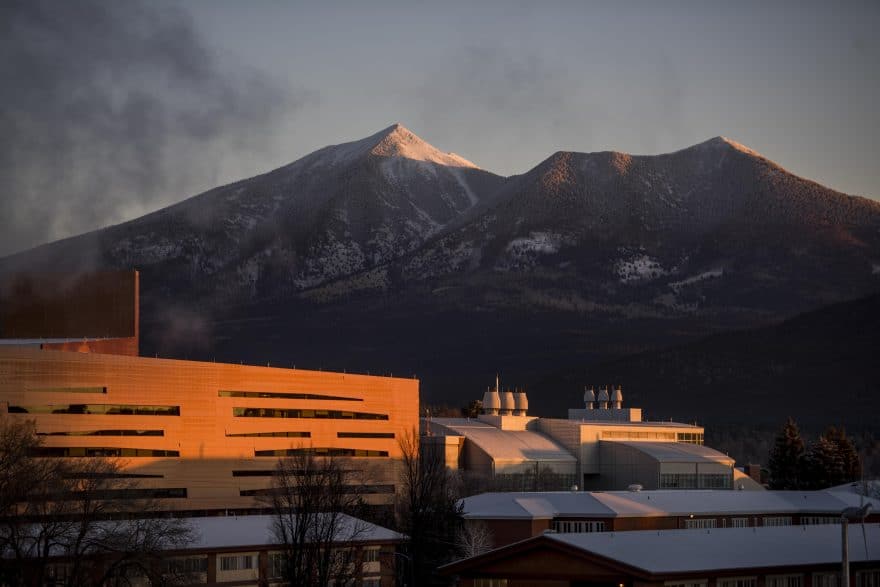 “The partnership [with Troxell] allows NAU to maximize efficiency and innovation through a hand-in-hand collaboration between the AV industry and higher education,” says Kegan Remington, a classroom support team lead.

Troxell has even brought interactive technology to some of NAU’s remote outposts, like the one in Fort Defiance, Arizona, a remote community of just a few thousand residents. In that way, these strategic partnerships are helping NAU break down frontier barriers, Burrell says.

Burrell is relatively new to NAU. He joined as CIO in July 2016, but he’s been in higher ed for more than 30 years. He was attracted to NAU, he says, by its innovative spirit and undaunted enthusiasm, even as higher education faces decreased resources and increased expectations.

Using an environmental metaphor, he says he’s eager to find water where nobody thinks water exists.

“We’re going to use technology and people and intelligence and data to make better decisions that result in efficiencies and effectiveness, with the sole purpose of advancing knowledge and creating life-changing opportunities for Arizona citizens,” Burrell says.

He attributes that direction, in large part, to NAU President Rita Cheng, who has committed to innovative support services, technology and academic programs to prepare students for an “ever-changing world and workforce.”

As a technologist who looks holistically at his environments, Burrell finds that message especially compelling.

“Just being here a year, I’m thrilled with the successes so far,” he says. “I’m really excited about what the next season will bring.” 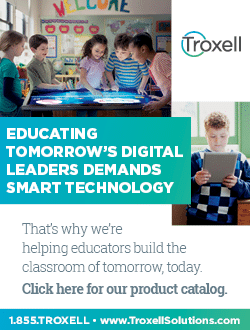 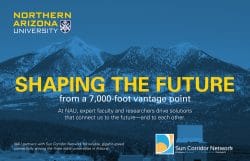 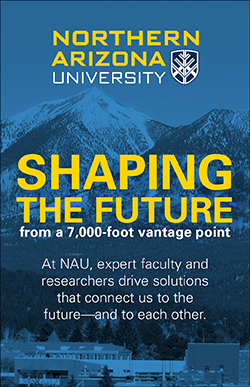