Albuquerque, New Mexico, has long been a place for visionaries in technology, perhaps beginning in 1975 when two young men moved to the high desert city to start Microsoft.

Though the city has never lacked for talented programmers and entrepreneurs, its data systems were woefully slow and out of date by 2009. Albuquerque was hampered by inefficient fiber optic networks, and its phone lines were clogged with tens-of-thousands of calls about bus scheduling that were costing the city thousands of dollars in labor to answer. Though the city had reams of useful city data regarding public safety, transportation and building permits, much of it was unavailable due to firewalls and bureaucracy.

In 2011, the tides started to shift, in part due to the city hiring Peter Ambs as its CIO to address its technology woes. Ambs says Albuquerque’s mayor, Richard Berry, was looking for “someone who wasn’t willing to accept the status quo, and also someone who wasn’t going to waste taxpayer dollars on unproven technology.” In other words, Albuquerque needed an experienced executive who would take chances without jeopardizing the delivery of city services. 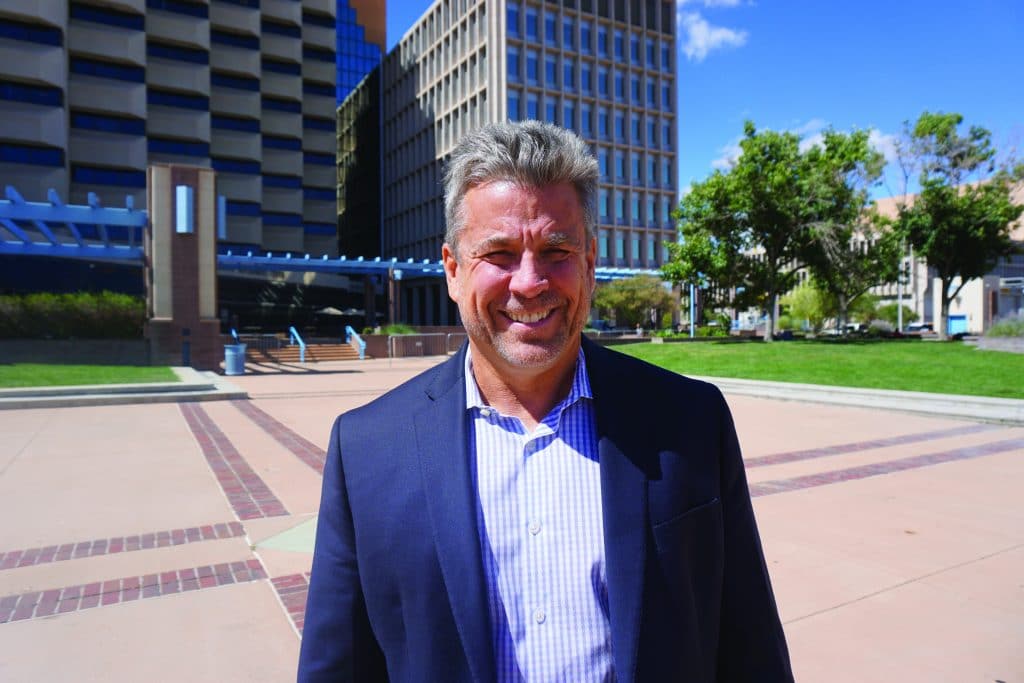 Ambs was the perfect fit. An Air Force veteran trained in computer operations, he worked in the private sector before becoming CIO for the New Mexico Children, Youth and Families Department, which was his introduction to the public sector and IT management. His blend of private and public sector experience has allowed Ambs to be “entrepreneurial and use ideas that have worked in other places without being on the bleeding edge of things,” where he might run into trouble.

Back in 2011, Ambs and a team of technologists began by modernizing the hardware and software the city used for many of its basic functions, cutting down payroll processing time by half and reducing the time taken to complete financial reports by months. The IT department also upgraded over 6,000 phones to a faster digital system and has made the city’s internal departments paperless by moving all documents, from memos to city business registrations and everything in between to a digital format.

“Every time I’m in a city office and see a piece of paper, I ask, what is that for?” Ambs says.

Amazingly, Albuquerque was able to achieve these technology improvements with no increase to operational budgets.  Ambs says the updates didn’t increase the department’s budget because it reduced the number of vendor contracts and eliminated redundant programs.  The city simply re-invested the money it saved in operations and management costs to technology-related projects.

“Every time I’m in a city office and see a piece of paper, I ask, what is that for?” Ambs says.

By removing the clutter of paper processes and speeding up the city’s computing power, Ambs and his team has given city officials their time back. Instead of slogging through forms and slow databases, Albuquerque’s government can spend more time helping residents with progressive programs, like an open data initiative.

Improving the way that citizens and government interact has always been the goal for Ambs and his team.

“We use terms like transformation and innovation—we look at things in those terms in addition to how well can we run a payroll system.” Ambs says.

To transform the perception of government in Albuquerque, the city has been publishing its public safety, community and transit information on an online portal called ABQ Data. By making the data public, Ambs says he is “creating a brigade of citizen analysts”—residents who can review city data and offer feedback or develop apps that meet the city’s needs.

Ambs believes that mobile apps are ideal for city governments because citizens prefer the ease of online interactions to the hassle of driving to an office and standing in line.

The IT department at Albuquerque has 29 mobile apps in production and some of them are already in place. One such is called ABQ Ride that is currently being used and that will be improved with future expansions. It’s a mass transit app that tracks the locations of busses in real-time, allowing users to plan and schedule trips accurately by notifying them of delays in scheduled bus and train stops. Before ABQ Ride, the city was getting 90,000 calls a year from residents confused about bus scheduling and delayed trips. Each of those calls had to be handled by an employee at the city’s 311 Call Center, which cost the city more than $1 million dollars a year.

All of the apps currently in development and production will be finished in 12 to 18 months. “By the end of this year we’ll have digitized every major city service,” says Ambs.

Other online services in production include a video feed of city government meetings, an app that creates maps out of city crime data and an app that provides listings and registration forms for local volunteer opportunities. Another app called City311 will residents to report damaged property, missed trash pick-up and even overgrown weeds, all online.

“Everything we’re doing we want to make sure we’re looking at how it’s smart, connected and mobile when it comes to providing a city service,” Ambs says.

Collaborating for the future

Ambs says one of the most exciting projects is Innovate ABQ, a joint effort between private sector partners, the University of New Mexico and the city of Albuquerque that will result in an entire “innovation district” in downtown Albuquerque. The district will contain commercial science labs, research facilities, startup business incubators and even living quarters,

“Everything we’re doing we want to make sure we’re looking at how it’s smart, connected and mobile when it comes to providing a city service.”

By the time the district is complete, Ambs and his team will be connecting neighborhoods to the University of New Mexico and the Innovation District through a new, high speed Albuquerque Bus Rapid Transit system.

“We’re making data-driven decisions now,” he says, “and not decisions based on visceral feelings.” Compared to five years ago, it’s a big shift, he says.