Bringing Healthcare IT into the 21st Century

When it comes to information technology and security, healthcare systems can face quite the quandary. First and foremost, they are beholden to protect the massive amounts of sensitive patient data that is constantly being collected throughout their facilities.

But just as crucially, it’s their duty as medical professionals to ensure their researchers and physicians have the ability to mine that information in their ongoing efforts to improve healthcare. It’s a delicate balancing act that Phil Campbell has wholeheartedly taken on in his role as CIO of CalvertHealth.

“There is definitely a struggle between sharing and withholding information,” he says.

“Patient care is a very hands-on environment, and therefore, the industry has been slower to adopt technology,” says Campbell, noting many projects in the works at CalvertHealth.

For starters, the organization recently upgraded its Meditech electronic health records system (EHS)—a massive migration that has required a significant learning curve throughout the ranks of its staff.

For more than 20 years, the facility had been using the software company’s MAGIC platform, but opted to migrate to its newest version, Meditech 6.15. Campbell notes that it’s been a bit of a cultural shift, with some trepidation and resistance resulting in lamentations of “Oh, this doesn’t work as well as it used to.”

“Change drives you to take a step up, but it doesn’t feel like a step up because you have to learn a whole new system,” he says. “That’s been an interesting metamorphosis to see. People have to invest a lot of learning and orientation into it.”

Ultimately, the upgrade will allow CalvertHealth to provide better and more targeted care, he says. The new EHS environment is “much more granular,” allowing physicians and researchers to pull out data, track various trends and then work preemptively with them—for example, identifying and following up with patients aged 55-plus who have a history of high blood pressure.

“That’s one of the big benefits patients will see over time,” says Campbell. “It’s a big project for us, but it will allow for us to provide even better care and make a difference with every life we touch.”

Taking advantage of such software improvements has also meant back-end infrastructure upgrades. CalvertHealth has updated much of its telecommunications network across the board, from larger facets such as its provider, Wi-Fi access and network security methods, to smaller elements such as switches and servers.

Along with all of this, the medical facility recently re-branded itself, changing its name from Calvert Memorial Hospital to CalvertHealth Medical Center to reflect its focus on the broader community.

The medical center is set to undergo a significant physical overhaul, as well. In September 2017, CalvertHealth broke ground on a $51 million, 88,000-square-foot, three-story expansion.

The new wing will allow the organization to convert its patient quarters to fully private rooms, and to outfit them with the industry’s most updated technologies.

“We know patients in private rooms get better sleep, have less risk of infection and benefit from improved communication with staff,” says Campbell. “Private rooms are definitely the best standard of care.”

The expectation is that the project will be completed by the end of 2020.

All told, he stresses, because medical facilities in Maryland operate under a population-based payment model that caps their revenue growth, the benefits of all of these upgrades are 100 percent for CalvertHealth’s patients.

“It’s an interesting thing from a business perspective: Your revenue is capped so you can’t add any new revenue, but the patient experience is so much better,” Campbell says.

No leaning to speak of

Despite his dedication to his new role, Campbell felt no previous tug toward the medical profession.

“I never had any expectation whatsoever of being in the healthcare field,” he acknowledges.

But when the CIO opportunity came up at CalvertHealth, he decided to go for it, at the suggestion of his fellow members of the local Rotary Club (which he has been involved with for several years). The ensuing transition has been both challenging and eye-opening, he says.

“I have certainly acquired a much greater respect for how complex the healthcare community is, and how intractable some of the problems are,” Campbell says.

He adds that he’s also been “a little taken aback” by how far behind the industry is compared to others when it comes to technology—which he ultimately attributes to its niche market, slow innovation on the part of vendors, high cost of upgrades and heavy government oversight.

Meanwhile, he says, his time in the military has provided him with insights and expertise that he draws upon today.

A 22-year veteran of the Navy, he has lived all over the world, including Greece, Australia, Japan, Hawaii and all along the Eastern Seaboard. Still, he never stayed in one place for long—he recalls moving at least 16 times over those two decades—which made embracing technology a necessity. So that he didn’t have to start over and over again with the essentials every time he changed locations, he was an early adopter of internet banking, cloud computing and VOIP systems such as Skype, and he quickly learned how to build both wired and wireless networks.

“We were doing all that way before it became mainstream,” he says.

Similarly, he credits CalvertHealth president and CEO Dean Teague—also a Navy veteran—with recognizing the type of leadership experience that the military can bring.

“It was easy for him to see that I would be a good fit,” Campbell says. “I think that leadership is leadership no matter where you are.” 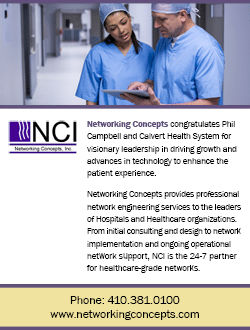