Pushing the boundaries of education

Let’s say a class is studying a sophisticated set of math equations, or interpreting a piece of art.

At the start of the lesson, each student pulls out a tablet computer, which is touchscreen and stylus-based, allowing students to write on their screens and zoom in or out with multi-touch. Everything on the tablet is interactive and can be manipulated. 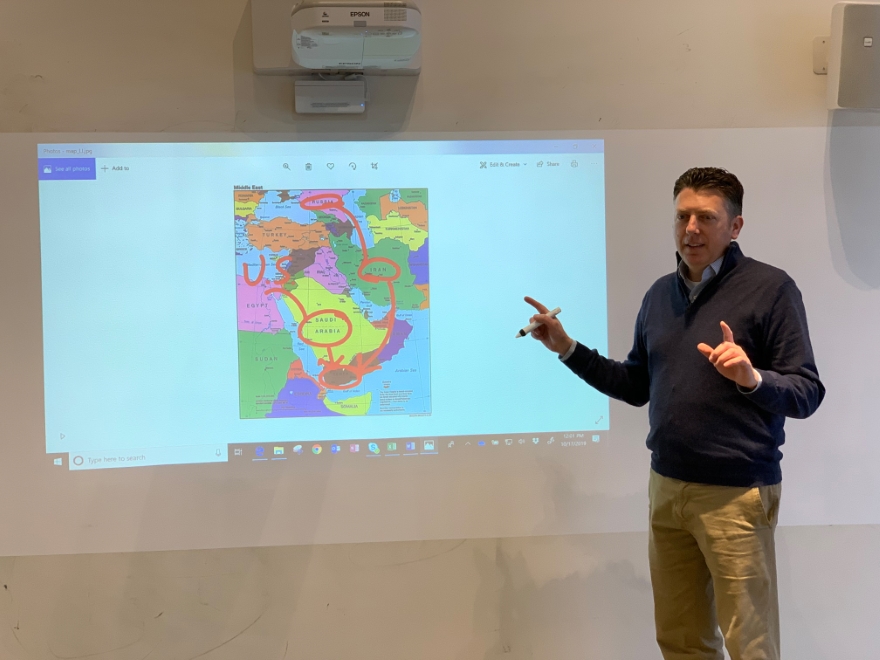 Complementing these tablets in every classroom is a wireless interactive projector. Students and teachers use their hands to mark, shrink and enlarge what is being projected thanks to the invisible infrared “curtain” the interactive projector is shooting across the wall surface.

Students draw, write, solve equations—ultimately, as Ryan Wooley puts it, “allowing them to have a conversation with the material.”

Wireless projection and digital ink are a powerful pair of technologies being used by Hawken School to push the boundaries of traditional education. They are signature “ingredients” in the school’s 1:1 tablet program, according to CTO Ryan Wooley.

“Our 1:1 program enables us to expand what we think of as the learning environment, instead of just a classroom with four walls,” says Wooley. “The learning environment can really spill out. We can take these tools wherever we need them—into the woods, out at the pond, at the local coffee shop.”

Based in Lyndhurst and Gates Mills, Ohio, Hawken School is an independent pre-K through 12th grade institution founded by its namesake, James Hawken, himself a student of American philosopher and educational reformer John Dewey.

Considered by some to be the “grandfather of progressive education,” Dewey, a Vermont native, emphasized a ‘hands-on’ and individualized approach to education that bucked the early 20th century trend to standardize or “economize” schooling. 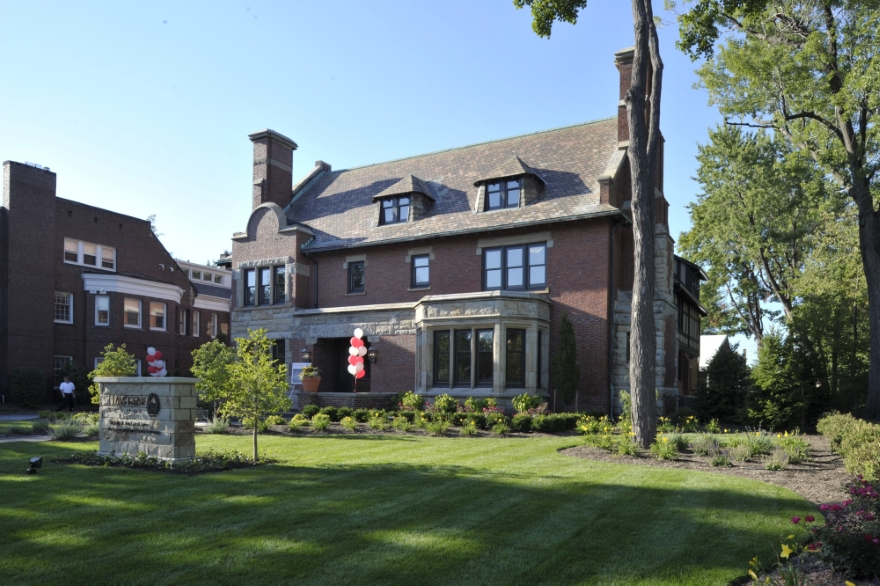 As Wooley contends, “It’s a better way of educating when you do your best to account for, and attend to, individual needs. Technology can be a big lever for that. What we do with technology here is a really important part of the puzzle.”

Case in point: digital ink, wireless interactive projectors, and tablets in the hands of every student. On top of that, students have electronic notebooks for each class, collaborating with teachers and each other via tools such as Microsoft OneNote and a learning management system called Canvas.

“Students can also project right from their seats, from anywhere in the room,” says Wooley. Projection can be passed “like a token,” he adds, so that all students can talk through their ideas, thoughts and processes. Educators call this process “making thinking visible,” he explains, and it is a powerful way to accelerate and deepen student learning.

Used in conjunction, digital ink enables interactivity and an active relationship with materials, he says, while 1:1 allows students to be “creators instead of receivers” of information.

In keeping with the idea of emphasizing active student creation and interactivity, Hawken also has two makerspaces outfitted with laser cutters, CNC machines, virtual reality equipment and 3-D printers. These spaces allow students to design and build a variety of hands-on projects. Meanwhile, for physical education—or, as Hawken terms it, “Human Performance”—digital wristbands have been incorporated into classes to track student performance data and determine progress, Wooley says.

The challenge in all this has been fusing old and new: Hawken’s campuses include historic, architecturally significant buildings that date back to the late 1800s. Wooley and his team have been tasked with preserving historic elements while implementing modern equipment in creative ways.

This includes the incorporation of sound and video equipment, security cameras, entry badges, as well as the essential networking infrastructure “behind the scenes.”

“It’s a fun challenge to work through,” says Wooley, who has been involved with several renovations and building projects at the school.

But then there’s the innovative nature of the school itself. As Wooley explains, class days are non-traditional—schedules rotate and courses change in length and time of day throughout the week. So, for example, on a Monday, a student might have English for 45 minutes in the morning and on Wednesday for 90 minutes before school lets out, then Thursday for 60 minutes after lunch.

This “rotation” runs for seven days and then repeats throughout the entire fall—from August until Thanksgiving. The “Fall Rotation” is followed by the “Fall Intensive,” where students take one class all day every day for three weeks, allowing them to do deep project work and labs, or to travel. The rotation-intensive structure then repeats in the spring. 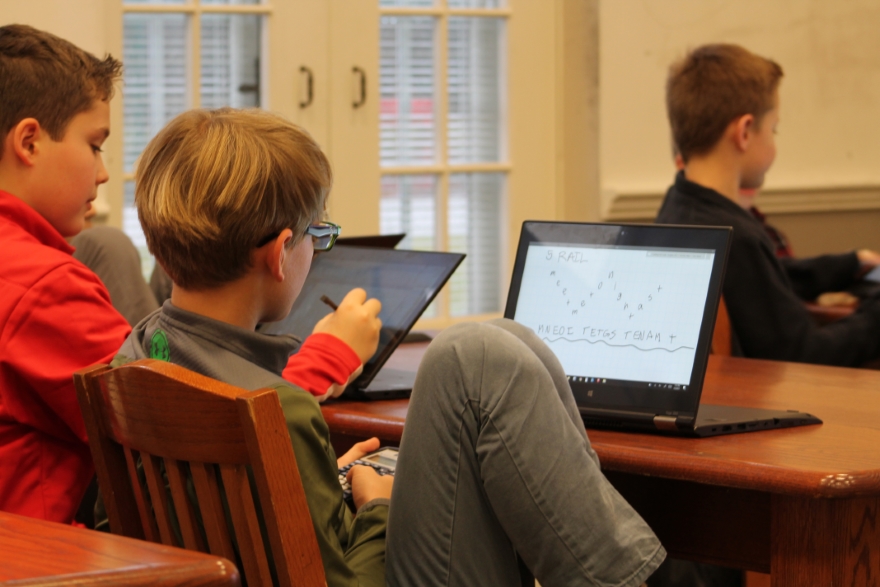 But by far the “edgiest” concept Hawken is exploring is the elimination of traditional grades and assessments. To that end, it is launching a “Mastery School” that evaluates students based on skill mastery. Current eighth and ninth grade students will have the opportunity to opt-in to this “school within a school,” which will be “more real world, real life, experiential,” Wooley explains.

Head of School Scott Looney founded the Mastery Transcript Consortium (MTC) in 2017, an organization that is designing new transcripts to replace grades with visually-represented mastery credits. The MTC has grown to nearly 300 schools around the world over the past three years and has found support from many prominent colleges and universities.

As Wooley notes, “A’s” and “B’s” have become arbitrary, and “don’t really measure what students learn.”

Fittingly, the Mastery School campus will be near Cleveland University Circle surrounded by colleges, art museums, medical facilities and businesses of all kinds.

Joining Hawken in 2008 after 10 years in various administrative positions at Kent State University in Ohio, Wooley has had the opportunity to experience Hawken’s innovative practices first-hand as a parent: His three children have attended the school.

“We talk about a lot of big ideas,” he says, “but as a parent of a student you get to see ‘What does this look like?’ Do we really deliver on our mission?”

He adds that, “The school has a lot of ambition. I wanted to be part of an organization that was really aspirational. I’m proud of what we do here.”