As far as Sean Moriarty is concerned, it takes a village to create a digital campus. As chief technology officer at the State University of New York at Oswego, he leads just that type of village, his door open to suggestions and his staff willing to lend its expertise to other educational institutions in need of hi-tech coaching.

“We’re a Starfish mentoring college,” the amiable 57-year-old career technology specialist tells Toggle, while another class completes orientation this past autumn at the scenic campus on the shores of Lake Ontario. “We’re known for being technologically advanced and are always glad to share what we know with the state university system and outside it.”

And what a difference has been made by the technical tools that the Oswego team has put in place.

Moriarty came to SUNY-Oswego in April 2013 after 27 years of serving the information technology needs of his alma mater, the University of Windsor in Ontario, Canada, where he earned degrees in science (math and computer science) and an MBA. The operation in his new place of employment impressed him from the start, but technology being an area that never rests, it was incumbent on Moriarty and the team to stay ahead of the perpetually steep curve.

“You can’t do that unless the entire campus buys into our plan,” he says. “Fortunately, that happens here, and we’re all the better for it.”

Of course, it’s not so hard to sell your plan when the rest of the campus shares in the goal of enhancing an already solid learning environment. Or when the IT team has been conditioned by Moriarty to epitomize five values: Be client-centered, collaborate and cooperate, deliver the stated business outcome and impact, communicate, manage security and risk. 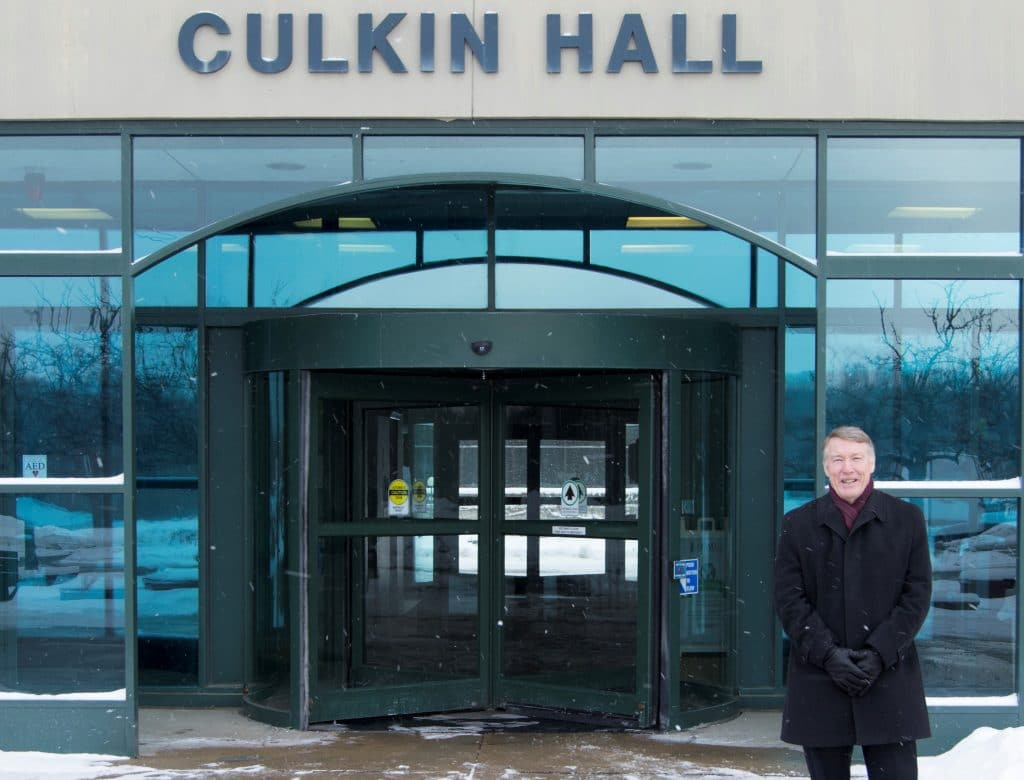 Among the successful projects has been the expanded use of Starfish, the system that uses data analytics to identify students who are at risk of dropping out or not graduating.

The program’s introduction incidentally, coincided with Moriarty’s arrival, initially targeting first-year and transfer students, as well as those on academic probation. Their midterm marks are entered into the system, and input is sought throughout the campus if a student seems to be struggling. Res Hall administrators, academic advisers and instructors’ input is sought if it appears the student’s performance is lagging. Since 2013, the retention rate has improved for some of the most vulnerable students.

“The technology is there to identify the need for intervention or assistance, but the real value comes when someone reaches out to the student to offer assistance and helps to resolve their issue,” Moriarty explains.

It may be the case that many such students who benefit from Starfish aren’t even aware of IT’s role in identifying their needs. And that’s fine with Moriarty, who enjoys hearing instructors describe the difference such a system is making and of now-successful students who benefited from tutoring or counseling.

“Some of those students may be away from home for the first time and have trouble adjusting to campus life,” Moriarty explains. “Our role—the IT role—is to provide the tools to help them.”

With Moriarty’s department at the forefront, more digital materials are also being incorporated into the classroom. The infrastructure has been revamped with the goal of offering students that “at home experience”. During his time, there’s been a 600-percent increase in the campus bandwidth and a 500-percent increase in the availability of wireless internet in the academic areas. The campus residential areas are even more covered, giving students a stronger sense of the comforts of home. 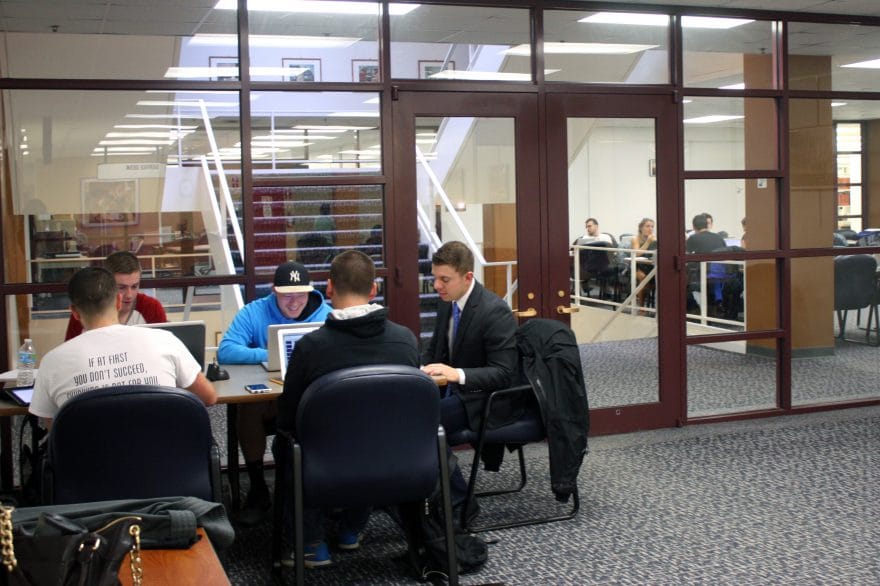 Then there’s the Technology Initiative Project, in which the IT department sets aside a pot of money for grant requests aimed at furthering Oswego’s goal of a digital campus fully supported by the surrounding community.

Among the campus recipients:

More digital learning materials also are being incorporated into the classrooms via Blackboard Inc., a Washington, D.C.-based technology company whose materials have been implemented at most U.S. colleges and universities, and over half the public school systems. A promising project is Digital Direct Access, where students receive their learning materials on the first day of class and are charged through their campus bill. It’s a win-win-win scenario: Publishers get 100 percent buy-in so they can charge less; students pay less for the materials and hit the ground running in their class; and the campus bookstore still makes a fair profit.

The son of a University of Windsor professor, Moriarty was always mathematically inclined, and followed a farsighted classmate’s suggestion that they both enroll in a computer-science course during the late 1970s. For whatever reasons, that classmate didn’t stick to computer science, but went on to be a respected math teacher. Moriarty, on the other hand, was fascinated by the emerging technology, seeing the potential it had in reshaping life as everyone knew it. 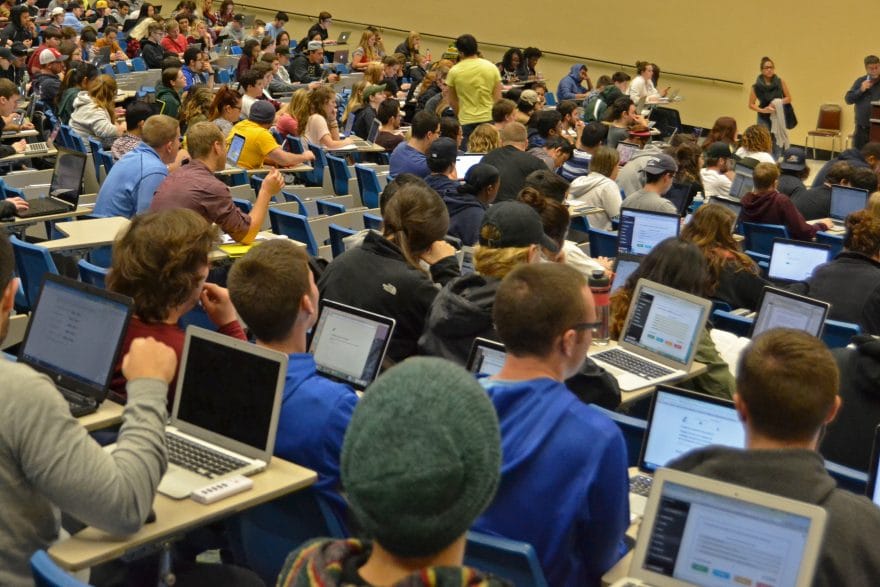 That interest was furthered when his father got the first microcomputer on campus, and encouraged his son to figure out its functions. The younger Moriarty became so proficient in that area that a few years after graduation, in 1986, he was hired as the university’s first microcomputer consultant. He remained with the university in a number of tech roles, ascending to assistant ITS director, then completing a two-and-a-half-year stint as acting executive director before opting to move to the United States for the SUNY-Oswego position.

It’s been an exciting five years for Moriarty, who enjoys leading an operation while seeing himself more as a partner. He proudly notes that four of his staffers have been awarded the SUNY Chancellor’s Award for Excellence, while another has a Lifetime Achievement Award on the wall.

“When others achieve, we achieve,” he says. “And we can achieve a lot with such a good group of people.” 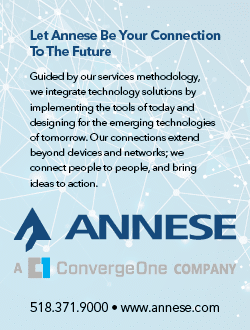