Especially in the public sector, which is where McDaniel has plied his infotech expertise and leadership the past two years as the first IT director of the south-central Texas city of Seguin. 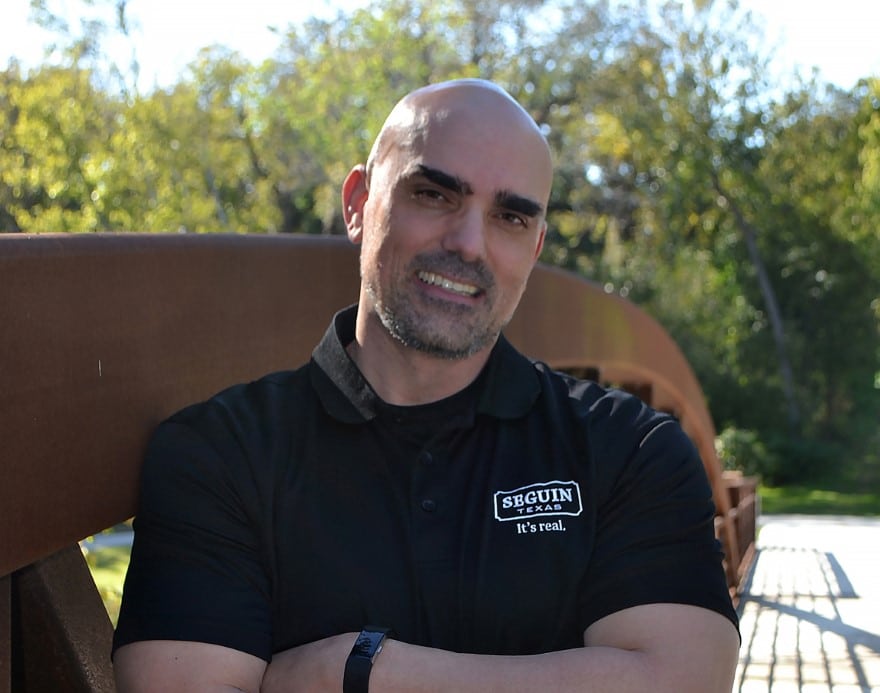 Shane McDaniel | Director of IT | City of Seguin, Texas

But it’s a controlled methodology that goes into this process, McDaniel states, with funding secured, staff engaged and strong vendor partnerships in place to support upgrades. Internalized technology ecosystem advancements will aid in offsetting the growth in Seguin and in so many other communities in the Lone Star State, he goes on to say.

“I spent about 10 years in Los Angeles and the Silicon Valley, and a lot of those companies that were in my backyard have since moved to Texas,” he says. “Toyota, Raytheon and so many others.”

Seguin on the move

And with those companies come people. Though Seguin might be perceived as old-school Texas, a blue-collar community 30 miles east of San Antonio and 50 miles south of Austin, McDaniel reminds it’s one of the state’s top manufacturing cities per capita and shares in the tremendous population growth.

At last count 29 new subdivisions were on the books, with 8,600 houses anticipated to break ground and the current population of around 30,000 potentially reaching 50,000 in the next decade or so. Given the indispensability of IT as a municipal tool and service, the preexisting legacy network McDaniel inherited in 2018 was not scalable to meet new demands. 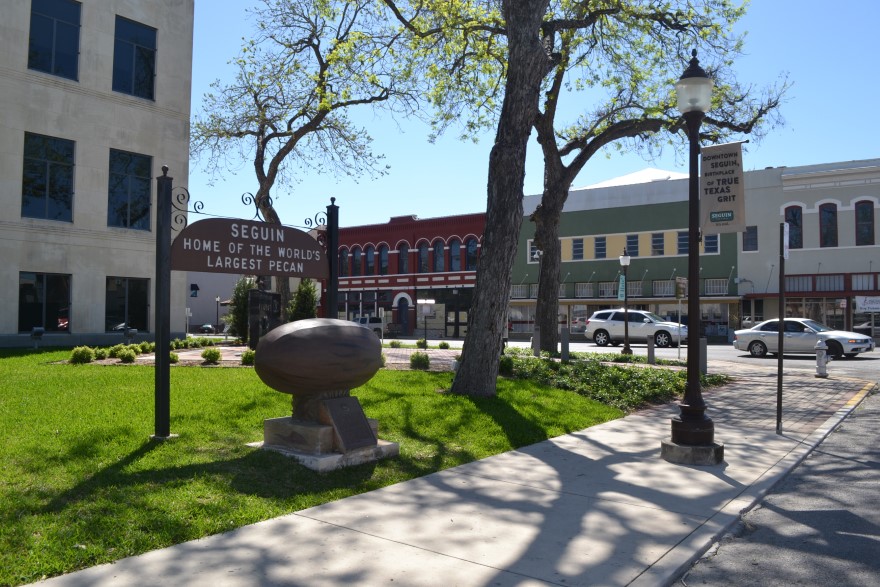 Only the upgrade wouldn’t be an overnight process. More like nine months, with caution taken every step of the way to allow 100 percent availability for the numerous critical operations supported by the city.

“When it comes to public safety and other critical services, downtime must be minimal, if at all,” McDaniel says.

Overseeing an IT team of eight and working with vendors, McDaniel spearheaded the effort to, in his words, “untie this big convoluted knot” that was a flat network configured to mandate data traffic pathways across the city. It would be replaced with infrastructure allowing for routing protocols to manage traffic dynamically.

“Untangling the system meant taking numerous steps back before moving forward,” McDaniel explains. “So much had to be sorted through. Every piece of technology had to be touched in some capacity, because we could not have seamlessly transitioned while simultaneously upgrading the network over the course of many months managing this effort.” 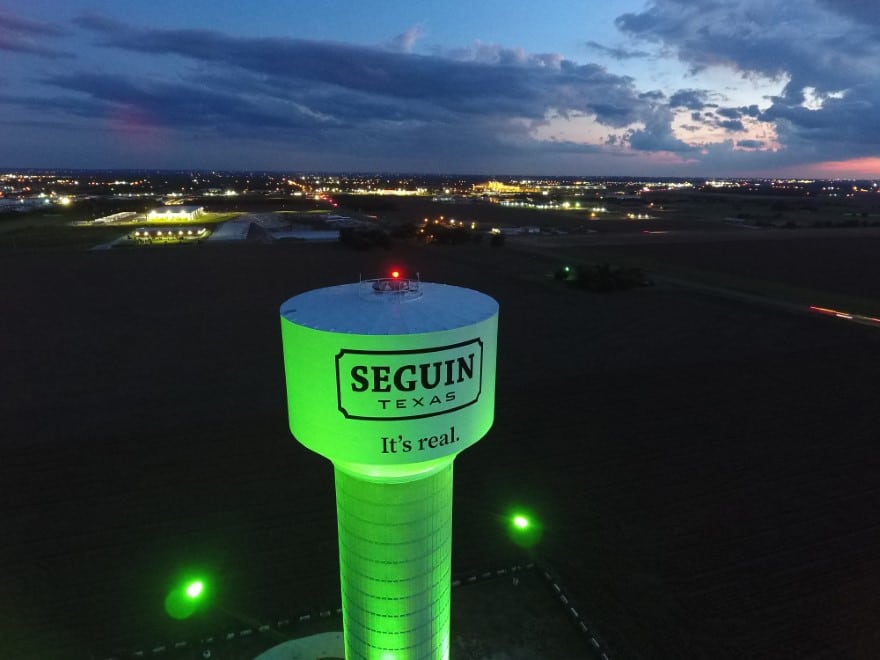 The project was done in conjunction with the city expanding its fiber ring, an extra five miles of high strand count fiber interlinking data centers and establishing redundancy and holistic connectivity, while providing the physical medium for future city facilities to integrate into the network infrastructure.

Noting the positive effects the Seguin IT department has had on public safety, last summer the Texas Association of Governmental Information Technology Managers presented the department with an Excellence Award for upgrading the computer-aided dispatch system [CAD-RMS] so it can be “future-proofed” to accommodate Seguin’s growth.

Seguin IT has also completed an overhaul of the city’s video management system, enhanced data security, established a new document management system and is actively testing a mobile data repository application to comply with the 2019 Texas Open Records Act that mandates municipalities keep text records for two years. Seguin subsidizes cellphones for its employees, and CellTrust has an app that establishes a mechanism to meet the requirement. McDaniel says initial reviews from first responders have been positive and he may include the platform in his next budget. 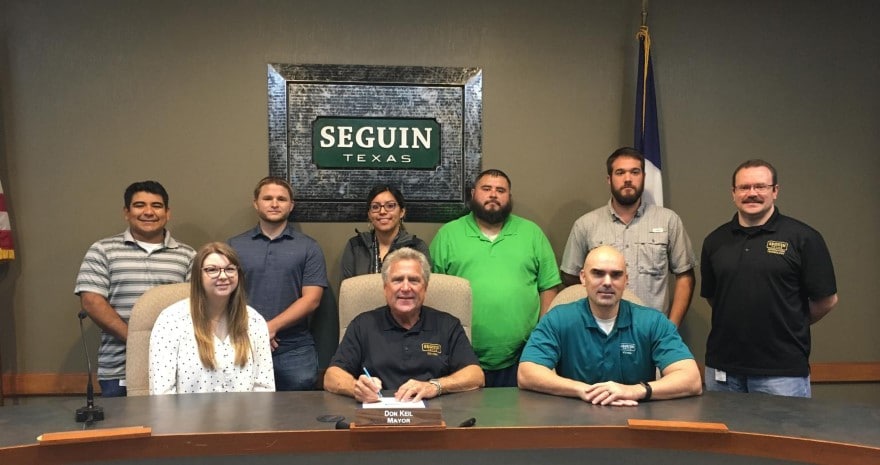 “I believe they have an intriguing product from a municipal government perspective,” says McDaniel, who met with the company’s vice president of business development by happenstance at a Dallas conference. “They were looking for a test bed in the state and I was looking for a product that could deliver this type of solution for Seguin. A win-win situation.”

He feels the same about another initiative, this one with Scale Computing, an Indianapolis company whose multi-year hyperconvergence project will stand up multiple nodes across the city for backend systems infrastructure, redundancy and disaster recovery.

“They’ve been an excellent partner thus far and despite our assigned rep working out of Indianapolis, he’s made multiple trips to Seguin as we are preparing to integrate this platform into our infrastructure,” McDaniel says. “I really enjoy working with partners who are committed to delivering a value-add solution on both sides of the purchase order. We clicked with those guys from day one and it shows.”

An internship program aimed at creating a pipeline of IT talent for this fast-growing region should also become more appealing. McDaniel is always on the lookout for budding technologists, but let them be advised: There’s more to working in IT than just the tech aspect.

“Attitude’s what I’m looking for,” he says. “Your experience, education and credentials, that gets your foot in the door. But all that goes out the window when we sit down for an interview. I’m not necessarily looking for the most qualified applicant. I’m looking for someone with heart and whose passion is seemingly tangible.”

In other words, McDaniel looks for team members who share his mindset, forged by his years in the Air Force, frequent relocations, high-security assignments and long productive stretches in the private sector.

“The military provided the baseline for everything I’ve had the good fortune to experience professionally,” says the 44-year-old McDaniel, son of a Marine. “I graduated high school in a class of about 25 and though the internet was around, I didn’t have access. I realized the only way for me to achieve my goals was to venture outside my comfort zone and experience what was out there.”

The Air Force provided technical training and overseas assignments that prepped him well for civilian jobs on both coasts including years supporting Dell, Fujitsu and federal security agencies. Local Texas government, however, beckoned with its possibilities of public service.

And around the time the Texas-born and raised McDaniel was looking in that direction, Seguin had committed to a proactive IT approach and the means for the right individual to make a fast impact. “I’m a Texan through and through,” he says, “it’s a privilege for me to do what I do right here at home.”

Though, as he reminds, that IT department wouldn’t shine without the personnel who make the vision a reality.

“My responsibility is to line up the pins and empower the staff to roll strikes,” McDaniel humbly explains. “And they do it in spades. The productivity coming out of this organization is nothing short of amazing. Most of the IT staff graduated from here in town and I think that resonates with the community. I hope residents are proud of what’s being done with tech on behalf of Seguin.”