For more than 20 years, Sharon Golett has been building and leading technology initiatives at the Caddo Parish School Board. Joining the organization in 1993 as a systems programmer analyst, Golett went on to become network manager for the school board in 2005 before being promoted to director of information technology in 2009.

In her current role, Golett works to drive the school district’s overall technological advancement while delivering information technology (IT) solutions that not only enhance the overall educational experience for both students and teachers, but also automate and streamline administrative functions while improving communication and collaboration between parents and teachers. 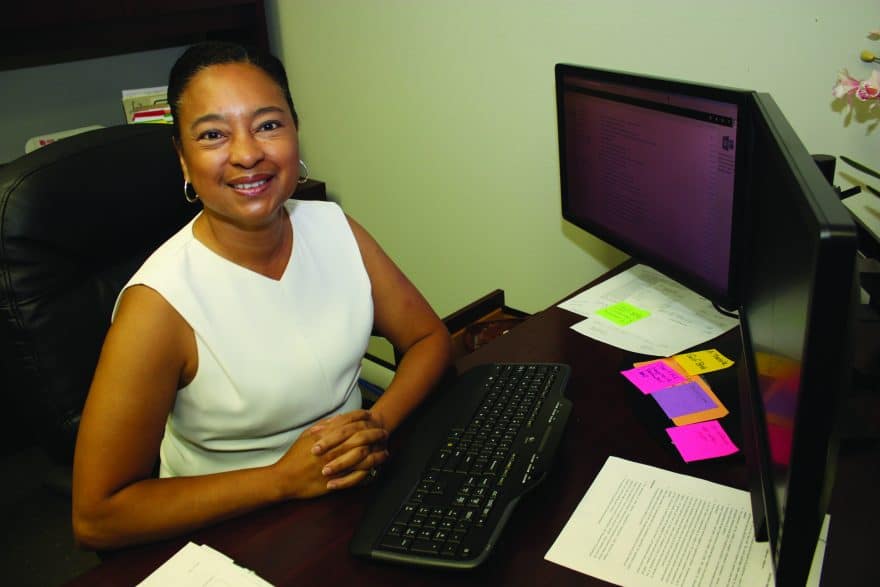 “I continually look for ways to align technology strategies with the district’s objectives. We have significantly advanced the central focus of leveraging technology to enhance the delivery of instructional programs,” says Golett.

In her time at the helm of the school board’s IT department, Golett has led several major technological projects, including modernization of the district’s data center and network infrastructure, implementing a new student information system (SIS) and replacing the district’s private branch exchange (PBX) voice system to voice over internet protocol (VoIP).

Throughout it all, Golett emphasizes the fundamental importance of collaboration as a necessary component to drive innovation. Among her department managers are Rickey Jones who heads a team that ensures network services are consistently operational while also delivering well-designed and tested projects on time. Additionally, Daisy Powell and her staff members worked diligently to transition the district to a paperless admissions process utilizing JCampus student online registration system. As for Mike Seal and his team, they tirelessly have spent the better part of four years coming together to ensure the implementation of a new payroll system and any changes in SunGard enterprise resource planning system (ERP) are done correctly and expeditiously. And no one can forget Dracy Peters and his team of technicians who take on the incredible task of maintaining more than 25,000 workstations across the district plus a host of mobile and tablet devices.

“The only way we are able to accomplish what we do is through the efforts of this incredible team,” says Golett. “We focus on how we can improve operations and functionality for our staff, students and families and come together with one united vision to make it a reality.”

An increased reliance on technology

Located in the northwest corner of the state, Caddo Parish is the fourth-largest parish in Louisiana. With a population of more than 250,000, the parish is home to 62 district schools with more than 40,000 students.

Golett has seen the role of technology in the classroom change dramatically. When her career started, a majority of classroom instruction was delivered in textbook form and the internet — if it was present at all — was typically little more than a research tool. But that has all changed.

“Technology touches every area of the organization: finance, operations, student instruction, curriculum development, and parent-teacher-student-administration communications. The internet is relied on for instructional content, accessing digital textbooks, incorporating STEM (Science, Technology, Engineering and Mathematics) learning, and delivering innovative virtual programs. As an example, our district will leverage the internet to launch its first online school. Caddo Virtual Academy will open in August 2016 to high school students with over 130 course offerings” says Golett. “Technology is a core element in driving and achieving the district’s strategic objectives.”

As emerging technology continues to become integrated into every facet of users’ professional and personal lives, Golett and the school board have increased the use of web-based educational services such as Classworks, Illuminate Education and MobyMax to improve learning and reinforcement.

With educators relying on these tools more than ever, it is Golett’s job to make sure the school district maintains the IT infrastructure necessary to deliver uninterrupted instruction. “When our network services are down for any reason, it now disrupts their access to resources that enhance learning or are the mainstream for learning,” she says.

Having spent time as a systems analyst at a regional gas utility company before joining the education sector, Golett has had some experience dealing with the technology needs of a large, corporate entity.

Golett saw the increasing influence of technology in the corporate world even in the early ‘90s and she signed on with Caddo Parish in part to avoid the technological arms race that was taking hold in the market, but it didn’t pan out. “The internet and network services are essential to carrying out the most basic day-to-day learning activities,” she says.

Chief among these key network services is the ability to conduct computer-based high-stakes standardized testing. With these types of assessments impacting everything from college admissions to district funding and teacher performance, it is vital that Golett delivers the robust network infrastructure to back them up. “Interruptions or network outages during testing sessions can upset students’ focus and can negatively influence testing outcomes. Careful planning is required to construct an environment for maximum stability,” says Golett.

Technology planning for over 40,000 users can be a difficult task, but in her role as director of IT, Golett has been able to apply the cutting-edge capabilities of new products and services to help save the school district – and, ultimately, taxpayers — money while improving overall communication and collaboration.

While there was an initial cost associated with the installation of the new system, the ability to piggyback the VoIP service on the new PoE switches will mean an end to monthly associated phone bill.

Golett and her IT team are now preparing to embark on one of the district’s largest infrastructure updates to date: migrating its wide area network (WAN) to a dark fiber network that will improve bandwidth to an impressive 10 gigabytes. Fostered by a shift in education realm from printed instructional material to digital, media-rich online curriculum made it imperative for Caddo to develop a network designed to be robust, reliable and flexible. This project is far from a fly by night operation with Golett and her team committing to more than a year of research and planning before signing off on the dark-fiber initiative.

“We were assisted greatly by our vendor partners and consultants in the planning and architect of our new design. It may be hard to imagine needing this much bandwidth, but we do know the need for bandwidth continues to increase exponentially,” she says. “We want to do our best to build a network that can sustain future growth.”

A commitment to student success

One of the district’s challenges is desktop management of staff and student devices. Golett counts the constant battle against viruses and malware as one of the most common desktop management problem. “We use various tools to handle software deployment, windows updates, and remote management. However, we are working on heightening user awareness. Once someone opens an email with a virus, it has the potential to spread quickly,” she says.

To best serve the students, faculty and staff, Golett works hard to ensure that the IT department completes all work orders promptly. Most priority work orders are completed the same if not the next day. Due to the district having over 62 schools, non-priority work orders may take more time for a technician to service. Golett has established a goal to complete all work orders in seven days. “We monitor the number of submitted, completed and open work orders. Our job is making sure users have working technology and network services to do their job,” she says.

Moving forward, Golett is optimistic about the district’s technological future. “I think we’re embarking upon great times here at the school system,” she says.

Golett is familiar not only with the school district’s IT history, its successes and failures, but also what it will take to prepare it to help students and faculty succeed well into the future.