Connecting people across generations and geography

Growing up with a historian for a father and later working for a futurist think tank in Washington, D.C., Stacey Aldrich has spent a lot of time considering where people have been and where they’re headed. Her conclusion? We don’t change as quickly as we think.

Her interest in the past and present has fostered a love of public libraries, a field she’s worked in for 20 years. After tenures as the state librarian for Pennsylvania and California, she took over the same position in Hawaii in 2015. Though technology has transformed the scope and delivery of services libraries offer, she says their role has held steady.

“The core of what libraries do is centered around collecting, preserving and connecting,” she says. “The ways we do that may change over time, but the importance, especially in a democracy, of making sure people can access information, stays the same.”

She says librarians, now as always, are bridges between people and information. In addition to providing books, they connect users to an array of databases, websites, e-services, applications and most importantly, other people.

The library is working on new ways to connect people to each other and their collective stories, which includes building a sound room for the new Nanakuli Public Library so the community can record stories from their Kupunas, or Hawaiian elders.

The library is also looking for new ways to connect communities across 50 library branches on six islands, such as using video conferencing systems to allow residents on more remote islands like, Moloka’i and Lana’i, to watch and participate in events held on other islands.

In each case, the purpose of digital communication is to connect people. The library staff carries out this mission by teaching patrons how to use new equipment alongside basic devices like tablets, readers and laptops.

Accessibility has always been a concern for librarians. In 245 B.C.E., the ancient Greek, Callimachus, developed the Pinakes, considered by many to be the first library catalog. It sorted the nearly 500,000 papyrus scrolls contained in the Library of Alexandria according to subject matter. Nearly two millennia later, in 1876, Melvil Dewey created the Dewey Decimal System to let users search through what was, by that time, many millions of items.

In 2017, there are more resources than ever and most catalogs are digital. Aldrich says she and her team must “rethink curation” by making their website and catalogue more intuitive.

Because libraries draw their information from separate sources and vendors with their own interfaces, there isn’t a single location where users can search to find every resource. Instead, she says, users have to “fish in multiple ponds” of databases or search engines.

The redesigned website doesn’t yet have a single search, but Aldrich says the library is beginning to think about how it can connect people to multiple resources in a more seamless way.

She envisions a system that enables users to find the story of a local Kupuna, as well as the historical maps, photographs and information mentioned in that story.

“This is the kind of information curation the library needs to do more of, so that people can find all of the rich resources that are available,” she says.

Alongside the improved website, the library is implementing new apps for smart devices, including one that lets users check out materials with their phones and another that lets them manage their library accounts, search for materials, place holds and even scan book barcodes at stores to see if the library has copies and can reserve them.

The apps are just a recent addition to the classes, e-books, audio books and e-magazines the library has been offering online for years.

Curating library materials is about promotion as much as organizing—as new resources come in, older ones risk getting buried.

In some cases, it’s hard for users to scratch the surface of what’s available to them. “We’re trying to learn more about the research component of users’ experiences so we can connect them to what they need, but also, what they didn’t know existed,” Aldrich says.

The collections of online resources are purchased to ensure that users have access to information behind pay walls. The subscriptions are costly and it’s sometimes difficult to know which are important for users.

In one case, the library cancelled its subscription to an online demographics service after reviewing statistics that showed not many people were using it. Afterward, a small business owner called her and said the service was critical to his business and that he was showing his colleagues and employees how to use it.

Aldrich cut a deal—she’d bring the service back, so long as he helped promote it by sharing his story with other library users. Deals like these, she says, are ideal because they encourage users to interact with each other, affirming the library’s role as a community space.

“Digital technology is a wonderful tool, but we find that people also want to have human connections,” she says.

After reading an 1890 report from Melvil Dewey, Aldrich says she noted the similarity between the challenges facing her team and those of a century ago.

“The report talked about how not enough people knew what resources the library had, or what services it offered,” she said. “I read it in 2010 and thought, ‘the core of what libraries do has not changed, but the way we do it with technology continues to change and grow.’” 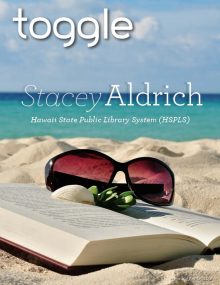