In Rancho Cordova, California, the information technology (IT) team at the Folsom Cordova Unified School District has adopted an inventive stance for usage, allowing a “bring your own device (BYOD)” program that integrates the use of personal devices for teaching and learning. “In the ‘90s we bought computer towers from Dell, HP and Apple and we ordered printers and Microsoft Office and that was our job; to support this network securely and keep these machines up and running,” says Terry Kritsepis, chief technology officer overseeing Folsom Cordova’s IT department and technology integration.

Kritsepis says this job has changed a lot in the last decade or two. “Now we’re seeing the advancement of consumer IT; everyone has a wireless device, so all of sudden there’s this complete ecosystem that people have a home that they are comfortable with and want to bring to work/school,” he explains. “I’ve done it myself. I have turned down a company phone and opted for my own device because it has my schedule, my photos and my apps. Business and personal life have converged on a device. Technology is not a sidecar; it’s the interwoven fabric of someone’s life.” 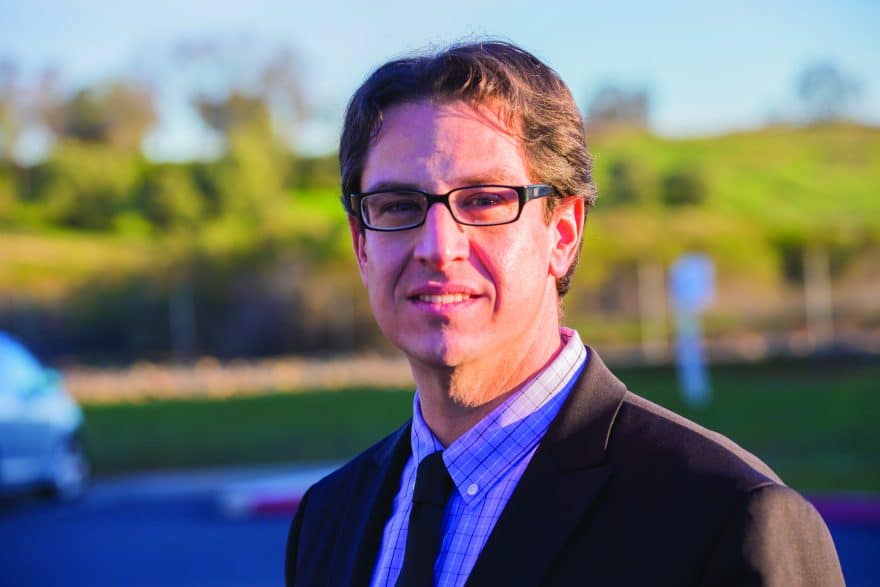 Relinquishing a certain level of control

Kritsepis says the same thing is happening in education. “Parents are telling teachers that their children need their phone, laptop or tablet device,” he says. “This goes against the traditional IT sense of control. We’re now asking, ‘How much control is necessary?’”

There has to be some form of control with Folsom Cordova’s IT department is responsible for the technology, hardware, software, training and support of some 20,400 students across 34 facilities, including 140 servers, 750 network switches, 1,200 wireless access points and more than 26,000 user accounts.

“We’re turning IT on its head by realizing that giving control and access to users isn’t taking away from our important as a department, it’s actually adding to the importance of our job and its relevancy,” says Kritsepis.

Having been in the IT sector since 1998, Kritsepis has seen the BYOD evolution and the ways in which the job description has changed dramatically. “I started as a systems administrator and network engineer, working in the private sector,” he recounts. “Then I moved on to a position where I ran several special education schools across California.”

In 2005, Kritsepis entered his first K-12 position. “I found my niche in being a technology leader with students, teachers and staff,” he says. “I eventually moved to Sacramento to be the assist superintendent of IT for a large, diverse school district.” He landed at Folsom Cordova about two years ago.

“It’s no longer cut and dry IT, especially in K-12 it’s more like the Wild West,” says Kritsepis. “We’re constantly trying to find ways to provide these resources online [through the cloud] so students can use devices at home and school. We’re not trying to create obstacles, we’re trying to create more synergy in technology and the things we do.”

Last year was the first year for the district’s new Riverview STEM (Science, Technology, Engineering, Math education) Academy, based in downtown Cordova. “The district identified this existing school for this type of education and we reopened and rebranded after about a year of construction,” says Kritsepis.

The STEM classrooms include Chromebooks and iPads and 80-inch Sony TVs used for instructional videos and broadcasting device display through Chromecast or Apple TV. “We’re seeing a big change in how we deliver instruction,” says Kritsepis.

The new STEM school has been such a success that there is currently an enrollment waiting list. “This is pretty huge because the school is located in a lower socioeconomic area and what is often thought of as an undesirable neighborhood,” notes Kritsepis.

Other district initiatives include Project Lead the Way, which creates a specification, curriculum and guidelines for technology focused on engineering, math and science. “We’re working on this mainly in our middle schools and high schools,” says Kritsepis.

Kritsepis and the IT department are also working to improve the district’s cloud technology and online storage to make as much information as possible available through web-based interfaces.

One way to relay information is through the use of high-quality video, something the district has been actively working on in the last year. “We’re embracing video to tell stories and relay information, integrating it into professional development and instruction,” says Kritsepis. “We hope to have a more active YouTube channel where video is a helpful tool in the world of BYOD.”

In terms of department success, Kritsepis says utilization is one of the biggest indicators. “Usage is the ultimate performance indicator – sometimes we have more work orders than we know what to do with, but we have to see that these as good problems because our customers [students and staff] are using the resources provided to them,” he explains. “It all boils down to their satisfaction. If were being asked for more upgrades and innovation, this tells us we’re heading in the right direction and that people are engaged.”

Kritsepis says he is lucky to be surrounded by such a great support team of staff and faculty. “We’re a family-like team and we take a lot of pride in what we do and why we wake up in the morning,” he says. “We’ve created and maintain an environment where people see the value in what they do and we have a community of parents and students that enjoy what we do too.”

By allowing greater access, and resigning just the right amount of control, Terry Kritsepis and his team at the Folsom Cordova Unified School District are helping students and faculty teach and learn from the comfort of their own device, guided by expert IT support.