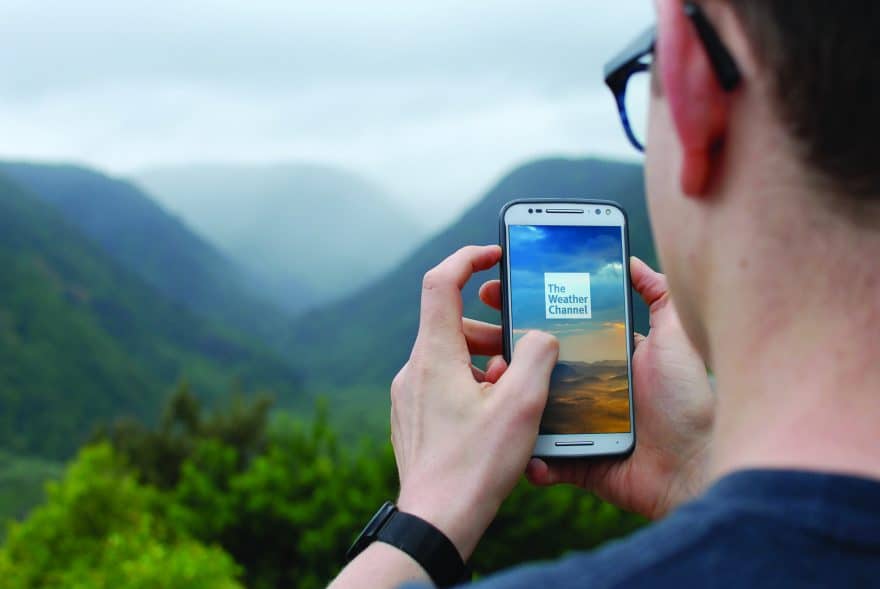 Billions of forecasts updated every 15 minutes

The Weather Company has the most accurate weather forecast in the world, and it works hard to maintain that ranking.

“At the end of the day, fundamentally what The Weather Company is about is helping people and businesses prepare and protect themselves for tomorrow,” Koehler says.

The company is in the business of predicting the future. Its products help individuals plan whether they’re going to swim or ski, allow airlines to decide if flights should be delayed or rerouted and make it possible for energy traders to predict market fluctuations.

Its offerings include The Weather Channel and Weather Underground apps for iOS and Android devices, the weather.com and wunderground.com websites and tech-based products for industries like aviation and insurance, among others. For the airlines specifically, The Weather Channel offers iPad apps that are used by pilots and flight dispatchers for 55,000 flights every day.

Behind all of this is a common approach to data. “The way we help a major airline make a decision on a flight is the same way we help my mom decide if she’s going to garden this week,” Koehler says.

The Weather Company collects data from more than 200,000 personal weather stations around the globe. It has its own weather models and brings in about 160 more. It uses more than 100 different weather data sources, including temperature data, lightning data and pollen data.

“Nobody on the planet has the breadth of data, volume of data, nor do they have the frequency of output or the number of locations [that we do],” Koehler says.

The secret to this success is that all of The Weather Company’s back end platforms ingest, transform and analyze data in the same way. Whether employees are working on a consumer applications team or the aviation team, they use the back-end API services very similarly.

“The underpinnings, the back end, the data platform, the analytics environment is all common,” Koehler says.

While The Weather Company has competition in the U.S. and abroad, Koehler says, “I think what sets us apart fundamentally is … this common data platform and putting a lot of investment dollars behind it because we can span them across so many applications.”

The cloud provides another advantage, and it’s fitting that a company with its eyes on the skies would operate in the cloud. The cloud allows The Weather Company to handle large spikes in use. On sunny days, the products get much less use, but when a storm comes, mobile and webpage views skyrocket.

During the last game of the 2016 World Series, for instance, it started raining in the ninth inning of the final game. Within 30 seconds of the rain starting at the stadium, The Weather Channel saw a 400 percent spike in traffic to its consumer apps and websites.

If The Weather Company were still operating inside its own infrastructure, that kind of responsive scaling wouldn’t be possible, Koehler says.

Koehler helped make that transition to the cloud and The Weather Company’s common approach to data possible. As CIO and CTO, he balances tech savvy and business prowess.

To be a great technology executive, he says, you need to have the technical qualifications to build the architecture, practices and processes that allow the technology team to be successful. As a great business executive, you need to assess the big picture and balance trade-offs.

“Being able to put yourself in the shoes of your customer and walk a mile or two really helps you make sure your technology deliverables are sound and going to be received with fanfare because you understand their predicament.”

“Being able to put yourself in the shoes of your customer and walk a mile or two really helps you make sure your technology deliverables are sound and going to be received with fanfare because you understand their predicament,” Koehler says.

Koehler thinks carefully about how the company should respond to issues, the words it should use, the transparency it needs and is constantly coaching his team. Internally and externally, he tries to foster a fun-loving, open, transparent and down-to-earth company culture.

“At the end of the day, you come up with your model and your plan, and then you have to repeat, repeat, repeat,” he says. “You have to continue to reinforce your message with your team every day. That is really how I get the best out of all the people we have in the company.”