Info-tech director of New Mexico Mutual since 2003, Tim Thackaberry remembers attending a Guidewire user group convention in 2006, so sparsely attended that all participants were able to meet in the hotel bar. How different Guidewire’s more recent get-togethers have been, packing thousands into large auditoriums complete with keynote speakers touting the capabilities of the cutting-edge software now used by more than 300 property and casualty carriers nationwide.

“I wish I had bought their stock,” the mild-mannered Thackaberry muses from New Mexico Mutual’s Albuquerque headquarters during a late-October interview with Toggle. “Guidewire opened for around $20; today it closed at $77.40. Some people made a few dollars, that’s for sure.” 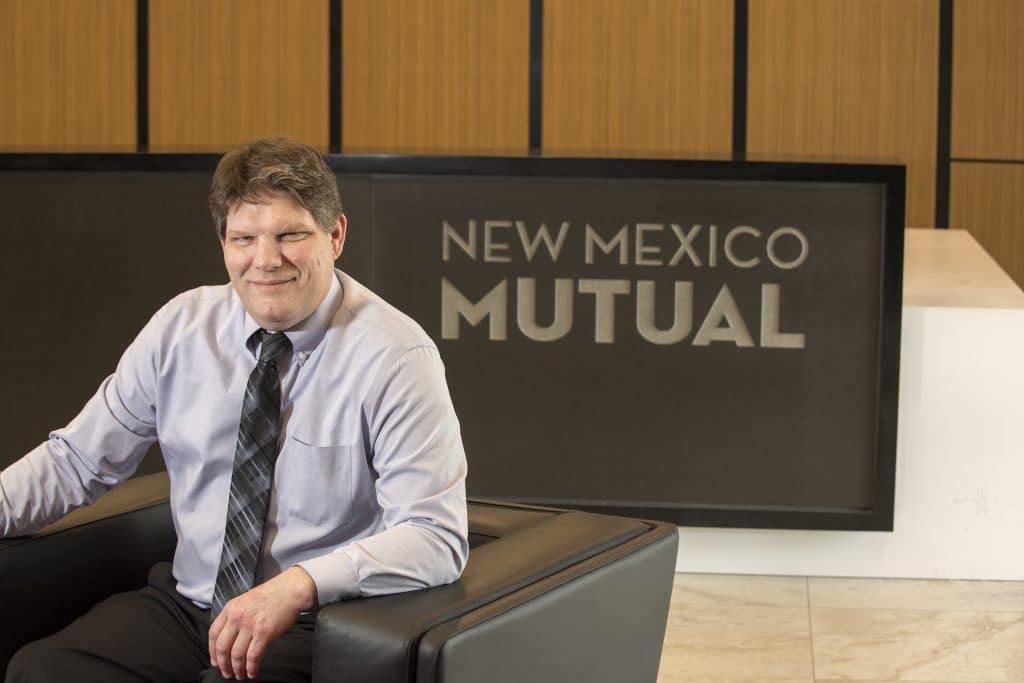 Those people may not include him, but at least Thackaberry’s employer has since come out ahead, with credit due the progressive and largely self-taught IT director.

For Thackaberry prudently invested New Mutual Mexico resources in Guidewire technology over a decade ago, bringing even more efficiency to the claims process as the modest insurance firm moved from an internal system to outside software that, among other advantages, allowed for the quick uploading of data and automatic underwriting.

It was just one of Thackaberry’s many initiatives that have kept New Mexico Mutual more than competitive against the bigger insurance firms as it goes about providing workers’ compensation coverage, through independent agents, to about 5,000 companies, all in this scenic, Southwest state.

From the technical end, Thackaberry has been in the insurance business long enough to know that companies can became insular in their practices, and he’s vigilant about that not vexing New Mexico Mutual. Workplace accidents do happen, he reminds, and those affected expect and deserve prompt action.

It’s been around a decade since he moved the firm’s claims system into Guidewire. More recently, Thackaberry and his 15-person tech team wrapped up a two-year project, replacing New Mexico Mutual’s core policy and billing systems, again using Guidewire and emphasizing the importance of relying on a third party, whose credentials are so impeccable. 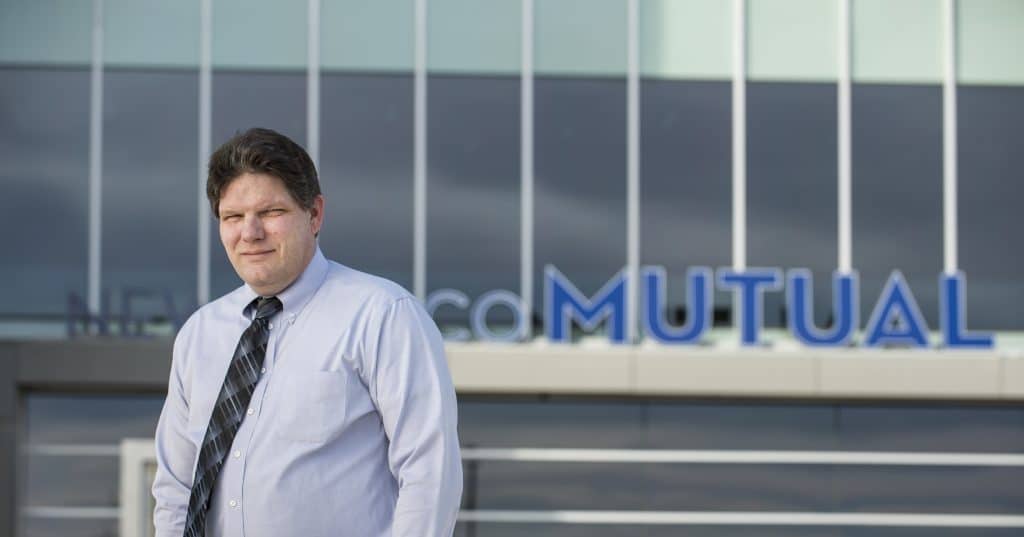 “Folks who came here (insurance) from other industries were shocked to find out there wasn’t a gold standard for property and casualty insurance,” he says. “This system has been very well-received; writing and maintaining your own code is very expensive. Many companies don’t have a real hope of writing good software. We turn to people who do it well.”

With the operations streamlined, Thackaberry sees further possibilities unveiling, including the easier leveraging of data to bring about even faster resolutions. The workers’ comp business as a whole, has seemed behind the curve, and the insurance firms most flexible in this regard are likely to thrive, he says.

As for other tools for growth, Thackaberry, like so many others in the tech world, is intrigued with Blockchain, but not yet ready to embrace it. Developed for Bitcoin, the digitized, decentralized public ledger of cryptocurrency transactions is appearing in more and more commercial applications, so at the very least, Thackaberry will be monitoring its progress.

“It’s the flavor of the moment, like Cloud was around 10 years ago,” he says. “Everyone talks about it, but no one really knows how to leverage it just yet. The value of easy-to-deploy, decentralized trust relationships is easy to see, and it will clearly continue the disintermediation trend that made the internet itself such an exciting development.”

Such is the case with so many developments in a high-tech world that never stands still. It’s a world that’s proved an ideal fit for the 46-year-old Thackaberry, although he didn’t initially plan to wind up in it.

Thackaberry majored in English as a Creighton University undergrad, Class of 1993. By the time he got his diploma, technology seemed the way to go, and Thackaberry found he had an aptitude for it that would prove most marketable at a time when other English majors weren’t in such demand.

“I made my bones in programming C and Perl, and was entirely self-taught,” he says.

Among his early jobs were a couple of years as project manager for Access Innovations, a database and web design outfit also based in Albuquerque. He came to New Mexico Mutual’s IT department in 2000, ascending two years later to director, where his duties included  managing the day-to-day IT operations, overseeing its budgeting and planning, developing and following short- and long-term plans, directing system implementations and overseeing cybersecurity. 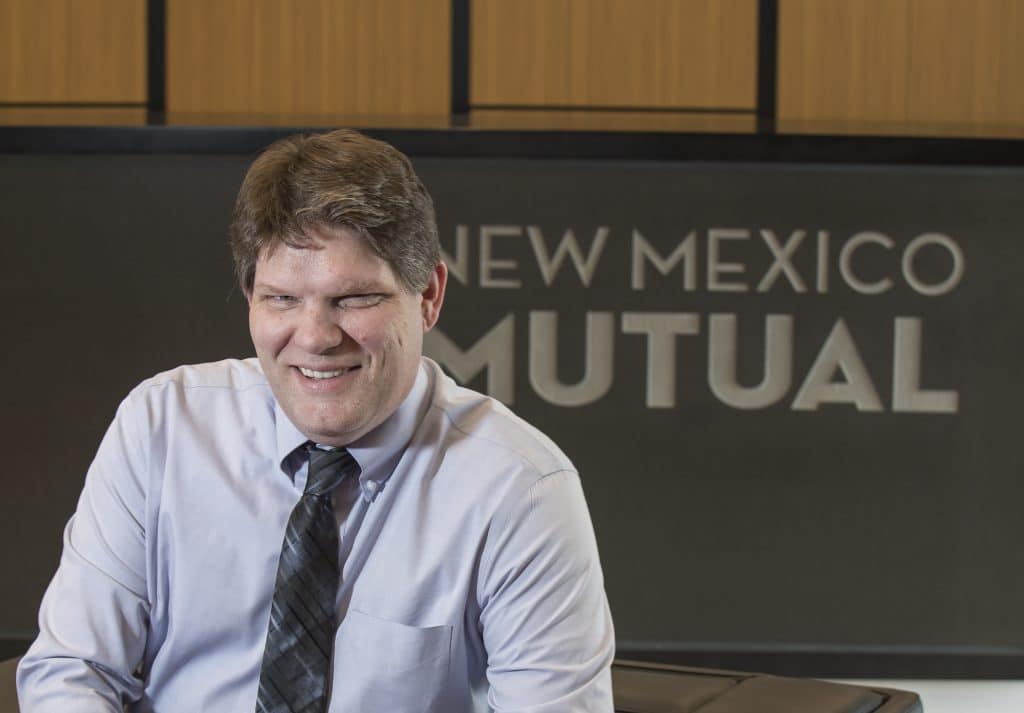 It helps to have a diverse IT team, he says; one that mixes savvy middle-aged techies like him with millennials, who have never known an unwired world. For those young people, nothing seems impossible where technology is concerned.

“They’re the ones who ask the most questions and challenge you when things become too corporate,” Thackaberry says with admiration. “They keep you honest; they ask why can’t you do things this way. They bring a lot of energy and willingness to the business. I find it great.”

That energy and willingness isn’t just great; it’s indispensable in an industry that changes almost daily.

“It can be exhausting at times, but it keeps you engaged and interested,” Thackaberry says. “You always wonder what’s coming next and how to apply it to what you’re doing.”

As to what’s next for Thackaberry, he’s open to a lot of possibilities. His daughter finishes high school in three years, and having lived in New Mexico since 1998, he might want to explore other places before his golden years become a factor. His credentials will be enhanced with an MBA, as in 2016 Thackaberry enrolled in finance courses at Park University, and he expects to attain that degree in 2018.

Technology may retain its hold on him.

“We’re poised for another communications revolution, or at least a continuation of one,” he says. “There are so many possibilities and combinations of technologies that haven’t been fully explored: holograms, sensors, the full uses of the internet. I can’t wait to see where it all goes!”

Guidewire was just the start.