It’s the job of a city CIO to bring these different factions to the table.

“Where my background probably helps is trying to align the end users and their business needs with the salesman at the door,” says Winston-Salem’s CIO, Tom Kureczka. Put another way, he says, “my job is to bring peanut butter and chocolate together to make a Reese’s Peanut Butter Cup.” 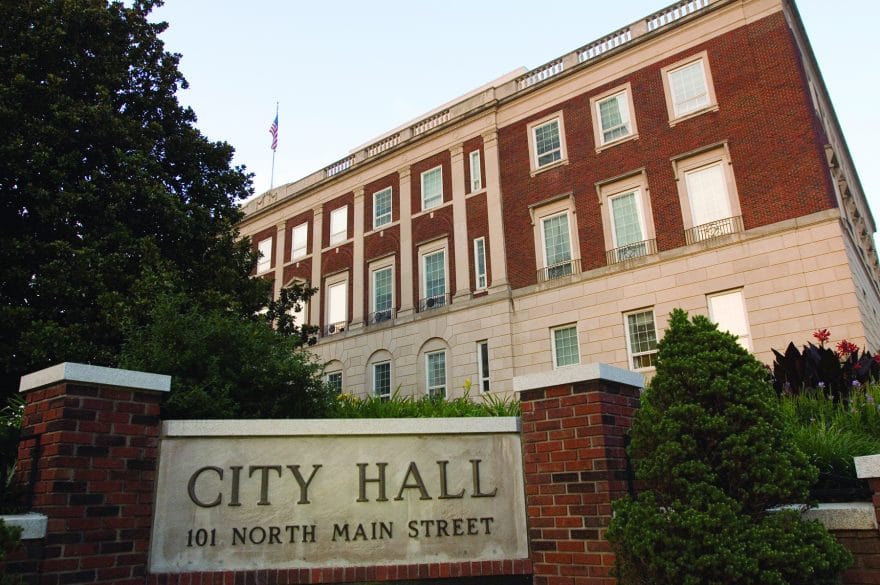 With experience in programming, computer system management, software sales and consulting, as well as his 20 year stint working in Winston-Salem’s IT department, Kureczka is excellent at coordinating between many, varied partners because he has held so many different roles himself.

Kureczka works with his peers across the state, neighboring cities and private companies to first create a high speed internet network throughout the city, and ultimately, to connect that network to a series of “smart” devices and applications like interactive signs, remote medical visits for residents and street cameras that automatically swivel in the direction of gunshots.

To carry out the first part of the city’s plan of giving Winston-Salem high speed internet, Kureczka’ s team first partnered with the North Carolina Department of Transportation (NCDOT) to lay 100 miles of new fiber optic cable. The NCDOT was originally going to only replace copper cables used to power traffic signals, but agreed to lay a separate line of fiber optic cable alongside the copper wire.

“My job is to bring peanut butter and chocolate together to make a Reese’s Peanut Butter Cup.” – Winston-Salem’s CIO, Tom Kureczka

The city will use this fiber to provide 69 facilities with high speed internet access. Kureczka says the partnership creates a shared responsibility, where Winston-Salem’s DOT (WSDOT) and its IT department are invested in the maintenance of these lines—the WSDOT because it must maintain traffic signals and IT department because it needs internet connectivity.

The city is expanding the high speed network further by working with the North Carolina Next Generation Network (NCNGN), a nonprofit collective comprised of four research universities and six cities located in what’s known as the Research Triangle, as well as the Piedmont region.

As a member of NCNGN, Winston-Salem has invited AT&T to expand the high speed network by connecting 21 community and recreation centers, as well as 21 small and midsized businesses to up to one gig per second internet access. The partnership benefits AT&T on multiple levels. Not only does AT&T get a large city agreement, but Winston-Salem has agreed to help expedite the permitting process that AT&T needs to lay fiber optic cables on its own, allowing the company to reduce the cost and time of building its infrastructure.

Kureczka says in addition to NCNGN, the city works with another nonprofit group called WinstonNet. WinstonNet has created 41 publicly accessible computer labs in the city, which is useful for residents who can’t afford mobile devices or internet access at all for that matter. When Winston-Salem and NCNGN contracted AT&T to install high speed internet, they made sure that 17 of WinstonNet’s labs were connected as well. With so many partners overlapping, Kureczka says his job is to coordinate between AT&T, officers at the nonprofit organizations and staff members at community centers and computer labs.

Apps for commerce and equality

But Kureczka says that laying down fiber optic cable is only the first step. “You may have these high speed networks, but you don’t really leverage them until [you’ve used them] to provide smart city applications,” he says.

One application Kureczka is excited about will allow patients to visit Winston-Salem’s Community Care Center and schedule remote visits with specialists like dermatologists and psychiatrists who can typically only be seen at the city’s hospital or at a university-related medical center. “If you have a low-income resident who is uninsured or underserved and [an available] physician at either a university or hospital, they can have a real time, high speed virtual visit,” Kureczka says.

In the central downtown area of Winston-Salem, Kureczka’s team is also exploring options for what he calls “digital signage”—interactive kiosks and billboards located at public locations like bus stops and on convention center marquees that will let visitors quickly access information on local events and transportation schedules. Alongside these more commerce-centered products, he wants to explore public safety programs like smart street lights with onboard cameras that will swivel in the direction of a gunshot and are capable of quickly capturing license plates.

To make all of these programs a reality, Kureczka must constantly coordinate with his nonprofit partners as well as private sector vendors. Luckily he spent two decades “on the other side of the desk” consulting and selling software solutions, so he knows how to speak to vendors.

In one case, he oversaw a meeting between a vendor representative and the CEO of a city-run arts and culture nonprofit, who were discussing options for smart applications to be used in the city.

“[The representatives] spent the first hour talking about all the fancy stuff they could do,” says Kureczka. “I said let’s stop for a minute and turned to the CEO, and said ‘why don’t you tell these folks what your business needs are specifically for arts and entertainment?”

Kureczka explains that when negotiating over software solutions his experience allows him to “cut through the smoke and mirrors” and help the city buy only the software and hardware that it needs, rather than buying technology for its own sake. In many cases, he says successful negotiation and partnership is about managing the scope, time and cost of the project he’s working on.

“Any [business] engagement whether it’s setting up a huge payroll system for a city or building a doghouse for your neighbor—there’s a triangle of scope, time and cost, in which each is impacted by the other.” Kureczka says.