Nestled in one of the country’s oldest cities, the University of Richmond is blazing a path to the future as a leader in campus technology. Founded in 1830, the University of Richmond was recently named one of the top 10 most wired universities in the country by the college ranking service Unigo, with more than 2,000 computers in labs, classrooms, research and public computing spaces on campus.

While the ranking from Unigo specifically recognized the university’s network of wired laboratory and classroom computers, the school is also a leader in wireless technology. “We were one of the first campuses to have a campuswide wireless network, and we continue to build on that,” says Troy Boroughs, interim chief information officer (CIO) at the University of Richmond. 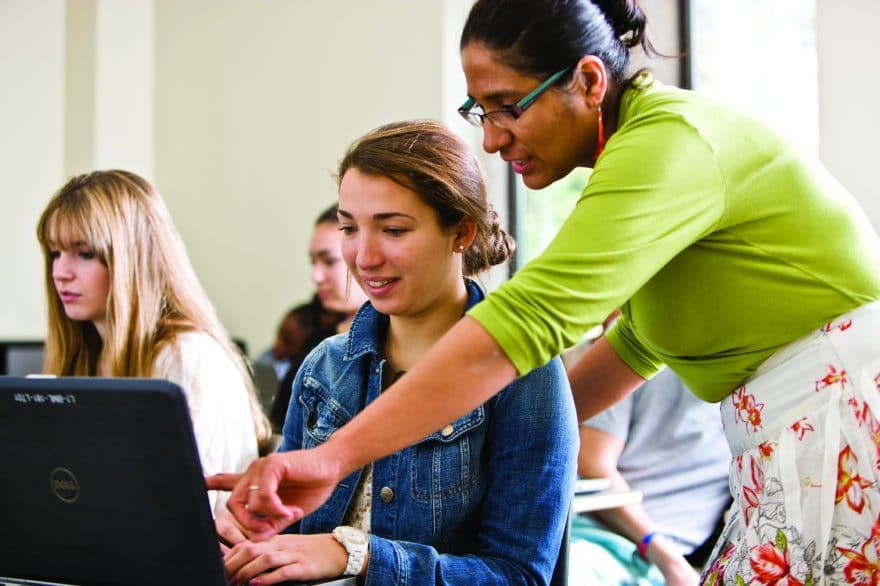 The University of Richmond’s high-tech credentials extend further than the computer lab. A vast majority of the school’s students own their own computers and 90 percent of courses offer a web-based component. The information technology team is currently leading the charge to upgrade the university’s wireless network, utilizing the latest 802.11ac technology and doubling the number of wireless access points on campus.

“The upgrade will provide wire-like speeds for our wireless users,” Boroughs says. “Students don’t really use wired connections anymore and many have multiple devices that they expect to be just as fast as if they were plugged in.”

Upgrading the school’s wireless network is just the latest on a long list of technology improvements that have taken place on the University of Richmond campus in recent years. The university upgraded its entire wired network in the summer of 2015, installing a fully redundant 10-gigabyte-per-second system.

“We also have total internet bandwidth of 6 gigabits per second, diversified across two providers so if we lose one we can keep functioning; we spend a lot of time building in that sort of redundancy,” says Boroughs. While the school is continually upgrading its network, the rapid growth of technology makes keeping up with the latest trends a full-time job.

“We haven’t yet reached the upper limit for internet usage. Every time we think we have what we need our campus finds new ways to use more,” he says.

With around 4,200 students on campus, the University of Richmond boasts an impressive 1-to-2 lab/classroom computer to student ratio. The school also provides iPads for use on specific projects and gives every student, faculty and staff space to create their own website — hosted by the university — that they can use for whatever purpose they see fit.

In keeping with the latest trends in technology, the University of Richmond offers all students, faculty and staff access to a cloud-based Box account, where they can store and share unlimited data. Described by Boroughs as being platform-agnostic, Box can store files of any type, whether generated on an Apple computer or PC.

“We used to give faculty and staff 10 to 20 gigs of storage and students had storage through Google, but we found that what people wanted more than space was collaboration and Box has been great for that,” Boroughs says.

Boroughs began his IT career in an industry far removed from the picturesque, Collegiate Gothic campus of the University of Richmond. After graduating from the College of William and Mary with a degree in computer science, Boroughs went to work for a paper manufacturer and then a software company before joining Capital One as a technology architect and project manager.

Having earned a master’s degree in business administration from the University of Richmond shortly after completing his undergrad degree, Boroughs had a longstanding connection to the school. “I never thought I was going to work here, but 10 years after graduation I was looking through ads and saw an open position,” he says.

“There’s a false perception that when someone puts something in the cloud they are eliminating their responsibility and accountability, but we’re not outsourcing our responsibility, just some of our work.” – Troy Boroughs, CIO, University of Richmond

Boroughs joined the University of Richmond’s IT team in 2002 as the director of systems and networks and was eventually promoted to assistant vice president for systems and networks. When the school’s CIO retired in early 2016, the university tapped Boroughs to fill the role in an interim capacity. “There are five distinct colleges co-existing on the same campus and we have over 300 enterprise systems, so it’s a complex operation,” he says.

The Information Services team is always looking for ways to improve the school’s systems and processes. In the past year, it implemented Hitachi’s UCP converged infrastructure, allowing the team to virtualize several hundred systems on a common computing and storage platform. The university is also taking advantage of cloud offerings. In addition to Box, Richmond recently implemented a SaaS lecture capture system, which allows faculty to record instruction and classroom sessions. These recordings can be offered to students to augment or review concepts at their convenience outside of the classroom.

Every organization demands something slightly different from its CIO, but at the University of Richmond, Boroughs finds a big part of his job entails change management, a nebulous term that includes everything from big enterprise initiatives to project management, user buy-in and communications. “There are also many legal, policy and compliance issues to consider; it wouldn’t hurt for a CIO to have legal training,” he says.

In his role, Boroughs is responsible for closely reading every contract that comes across his desk when the university wants to use a new technology solution or service. “If you buy a cloud-based system, you’re really buying five or six different providers integrated together. The contracts can be lengthy with dozens of hyperlinks to other contracts,” says Boroughs. “We’ve had to become investigative researchers to figure out what’s behind the products we’re reviewing.”

Boroughs has found himself having to battle against perceptions regarding where liability lies in the use of cloud-based technology. “There’s a false perception that when someone puts something in the cloud they are eliminating their responsibility and accountability, but we’re not outsourcing our responsibility, just some of our work,” he says.

The University of Richmond IT department performs a majority of its own work, though it will occasionally call in outside vendors to assist with upgrades during the short summers on the college campus.

A campus is a much busier place than many would think. “It’s like running a small town because students live here throughout the year and services must be provided 24/7. In addition, students as well as employees bring every consumer device you can imagine to campus and we do our best to securely integrate them.”

IT relies on a network of vendors to provide the university with the latest and greatest solutions and is fortunate to have many good partners from which to choose. “The competition keeps us all on our toes, but results in better solutions and lower costs for the university,” says Boroughs. “Universities are complex ecosystems with many competing interests, but that’s what makes them interesting and fun places to work.”

With chief information officer Troy Boroughs at the helm, the University of Richmond will continue to remain a technology leader in higher education. 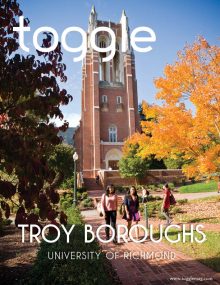